“When I viewed the video that everyone is viewing, and certainly the slowed version, it appears the individual inside the vehicle fires his weapon at the officers first” 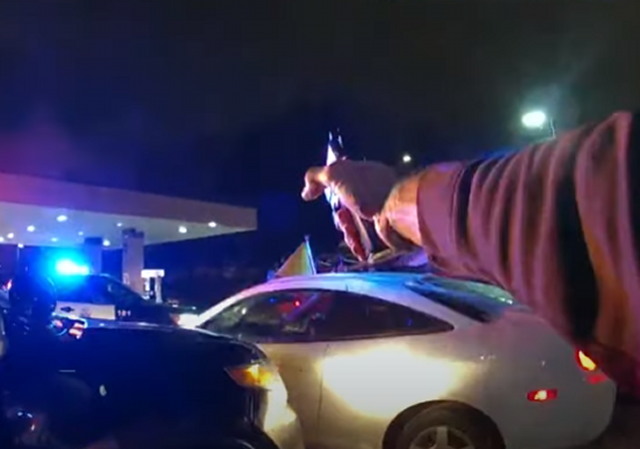 Minneapolis police shot and killed a felony suspect during an exchange of gunfire this week. The shooting sparked protests, but newly released bodycam footage from the police shows the suspect fired first.

Can anyone even imagine the pressure these officers are under in a situation like this?

Frankly, it’s amazing that anyone even wants to do this job in Minneapolis anymore.

Minneapolis police have released body camera video that shows what investigators are calling an exchange of gunfire between a man and officers on Wednesday that left the man dead.

Police say they were performing a traffic stop in the area of Cedar Avenue and 36th Street around 6:15 p.m. on Thursday when the shooting occurred.

Chief Medaria Arradondo said witnesses told officers that the man fired at police and was killed as officers returned fire.

In the body camera video, an officer is seen exiting a squad as other officers attempt to box in a man in a white sedan, which is trying to drive away. In a slowed-down version of the video, you can see the man’s driver side window glass shatter outwards before police start firing into the vehicle. At least a dozen shots are heard on the video. Police say there was a woman in the car who was not hurt.

“When I viewed the video that everyone is viewing, and certainly the slowed version, it appears the individual inside the vehicle fires his weapon at the officers first,” said Chief Arradondo during a Thursday afternoon news conference.

See the video footage below:

Here's the Minneapolis bodycam footage from the police officers who fatally shot a felony suspect who, to no one's surprised, fired first. pic.twitter.com/BCHeF6Mylu

Luckily, the protests didn’t get out of control.

A felony suspect who was pulled over during a traffic stop opened fire on police officers, according to witness statements, Minneapolis Police Chief Medaria Arradondo said in a press conference Wednesday. The suspect was fatally shot by police, no other injuries were reported…

Arradondo asked demonstrators at the crime scene Wednesday night to allow law enforcement to complete their investigation without disrupting the scene. He said Democratic Minneapolis Mayor Jacob Frey has been kept up to date.

This video includes a statement by Chief Arradondo:

A fatal police shooting in Minneapolis sparked protests late Wednesday, in the first killing by a member of the department since the death of George Floyd, according to authorities https://t.co/KltCM3sEav pic.twitter.com/QIbTvSTYmE

All police should wear cameras in such situations from now on, for everyone’s safety, including their own.

Doesn’t matter if the perp shot first. The cops were racist for pulling him over…even if the guy was white, I’m SURE the cops thought he was a POC!

I was a cop. I would never stick around in a department/city like that.

The criminals are sacrificial fodder for the left to push their fascist agenda.

You think martial law surrounding Covid is bad? Wait till the Whitmers and the di blasios and garcettis and the cuomos invoke the same unlawful powers for a number of reasons in the near future, none which have anything to do with covid.

There is no going back to governing a free America: with 2 generations rotted by leftist schools and media – and third in the making, and “our” purported political party, the GOP, is in league with the leftists and ChiComms (just look at McConnell’s wife’s dealings) and our courts being corrupted – we will never be a union again. At least unless WE are willing to give up our way of life.

We have to start the discussion on secession, or we’ll find ourselves soon wearing red stars on our collars, if not Stars of David.

With the election of Traitor Joe and Traitor ‘Ho, our nation has become Hong Kong. We see what is happening to Hong Kong.

Should we stand and shoot back? What is his diversity class? Can we shoot back, or should we kneel?

Can we make special bullets, alloyed with mercury, arsenic, etc.? What we have are dem deplorables being conned, they will get handouts until the con artists cement their power, and then they will find themselves much worse off, it is a shame that by and large dem deplorables are to lazy or stupid to have read and understood Orwell’s work.

One can see the shot fired first by the driver… game on. After that, it’s justifiable target practice. Anyone protesting that is dumb.

Come on – they’re not ‘dumb’. These people have just committed a successful coup and took over the most powerful nation on earth without firing a shot.

WE are the dumb ones for standing by like we’re waiting for a bus.

It’s over: we will NEVER see the America we grew up in again. EVER. Our only hope is to secede and form a new America, where the likes of the left, hollywood and rino trash will not be welcome.

It’s the narrative that comes out first, facts never have mattered yet.

It doesn’t matter who shot first. We are living in a world of governed by narrative now, not fact.

If you are still a cop in Minneapolis and you are not actively seeking other employment elsewhere; you are either a Leftist true believer, or not that desirable to other departments for some reason.

Or absolutely believe in serving and protecting the helpless.

Or, I have some sort of a family obligation were moving is absolutely impossible. Infirm parents or chronically sick children might be part of that. Not everybody has freedom like some of the rest of us do.

I have that problem, my father in his 90’s in bad shape and continuing decline. I live ten minutes from him, other siblings are much further away, the closest needing at least an hour and a half to get to him.
My other problem is my youngest child which has impairments, I do not want to leave her in Michigan. Looking at Michigan demographics, I can not ensure that the child will be ok for at least 50 years.

The CCP virus has greatly complicated my situation.

Many of these officers have probably been on the department for 15 or 20 years. That is a long time invested just to pick up and start all over again someplace else. Those officers did not knowingly put themselves in this situation. The Minneapolis / Saint Paul area was nice 15 years ago. I used to travel there regularly for a job I had at the time. It was safe to walk the streets at night then. Then the Obama administration decided that it would be a good idea to move massive numbers of Somali refugees to the area. Minneapolis became Mogadishu in a few short years.

When your group’s heroes and martyrs are felons, the most gossamer of excuses are adequate to justify mayhem. Someone needs to liberate the captive Jordan’s.

Stalin’s NKVD, Mao’s Red Guard, Hitler’s Brownshirts, Pol Pot’s killers: they were all a mixture of felons and disgruntled losers. They made excellent genocidal maniacs.

We have them now in America, chomping at the bit to kill us under the color of “Biden” or “Harris” law.

“Police say there was a woman in the car who was not hurt.”

Superb marksmen, and heroes in my book.

When leaders can’t off safety to the public they can offer nothing and must be replaced.

When I first came to Mpls to attend grad school at the U of M I lived just a couple of blocks away and used to leave my car on the street unlocked overnight.

But that was then and this is now.

Most impressive. So often we see reports where police fire multiple shots and miss altogether. In this case a female was in the presence of about a dozen shots and she was unharmed?

Usual shots on target are 1 in 4. Really good marksman can and will do better. The psychology and physiology of combat are very interesting. Time slows down, somethings magnify and sound goes away…focus distorts. Yet.. there are victors.

There have been gunfights at close range and nobody got hit.

The use of bodycams, ironically at Al Sharpton’s suggestion, seems to have really slowed down all complaints coming from Al Sharpton’s direction. I don’t know what he was thinking, but it sure worked out well.

I like the tactic being used by the po po here. Hold onto the footage until the protest ramps up, and then hit them with the real facts. At some point, they are going to stop running every time someone shouts “racist cop.” This evidence isn’t going to fix the fanatics, but it is sure going to dent heir appeal to the fence sitters who far outnumber them.

Al Sharpton is no technologist, he had no way to know the cameras would work so well so cheaply that every cop could wear one….

At some point I expect Al Sharpton to be screeching about “those racist body cameras”. Simply because they have been so detrimental to the race-hustling industry.

All police should wear cameras in such situations from now on, for everyone’s safety, including their own.

I’m more than sure the race hustlers and race baiters are regretting demanding that law enforcement wear cameras as it seems they only vindicate the officers and not the race baiters making brutality claims.

I’m pretty impressed with the officers. They managed to shoot the driver without harming the woman who was also in the car.

I have a solution.
Of course I put on my liberal thinking cap to come up with it. The cap blocks all logical and sane thoughts. Not a pretty sight.

Anyway, here goes. We make all people wear multiple bodycams all day long and sleep with one attached to our heads at night. That one will have infrared so we can see when the cops break in at night to murder us. And we can also wire every house with a cam just in case the one on your head slips sideways and we don’t get good video.
Once we have the body cams of all those seriously but mostly peaceful innocent homeboys who are unjustly pulled over or singled out at a mostly peaceful demonstration then we have evidence and can put the police on trial for every murder of those mostly innocent and peaceful demonstrators and have the cops put away for life.