U.S. Space Force members will officially be known as “Guardians”

U.S. Space Force members will officially be known as “Guardians” 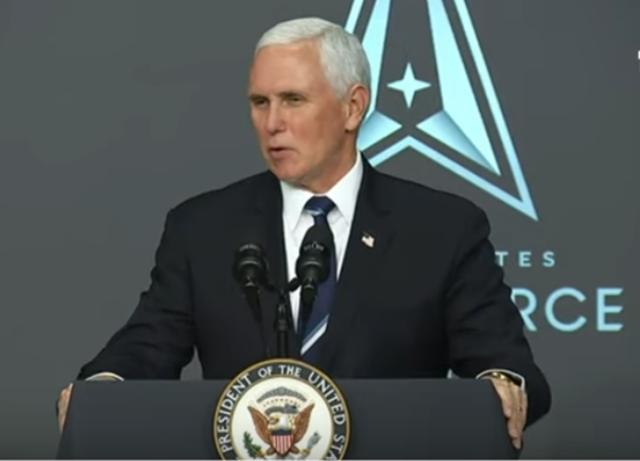 About a year ago, we reported that President Donald Trump had officially launched the “U.S. Space Force,” which would bring the nation’s military space capabilities under one organization.

We have covered the “non-troversy” over the logo and the uniform as well.

“Sailors, soldiers, airmen, Marines and guardians will be defending our nation for generations to come,” Pence said.

The veep made the comments during a White House ceremony marking the service’s upcoming first birthday on Dec. 20.

The Space Force said the name was picked out of hundreds of submissions during a yearlong process.

“Guardians is a name with a long history in space operations,” the service said in a tweet, noting that the motto of the former Air Force Space Command was “Guardians of the High Frontier.”

“The name Guardians connects our proud heritage and culture to the important mission we execute 24/7, protecting the people and interest of the U.S. and its allies.”

Many on social media were very enthusiastic about the announcement.

We just need a #CyberForce now. These are the battlegrounds of the Future. #HumanityForward #Guardians https://t.co/d5WiukvD1i

There were many entertaining references to the movie “Guardians of the Galaxy.”

Lmaoooo @Guardians aka #GuardiansOfTheGalaxy lol
The Captains name will be #StarLord ? @prattprattpratt https://t.co/21pEL9WM2x

Pence announces that Space Force personnel will be called guardians. Does this mean they will recite “I Am Groot” at their swearing in? #guardians https://t.co/Dikcgs9mEl

Of course, the haters have got to hate…no matter the subject.

What culture, mission, & heritage are they referring to? #GuardiansoftheGalaxy? Or maybe the sinister #guardians in #TheHandmaidsTale?

In short, it seem @DeptofDefense managed to come up with the equivalent of “Boaty McBoatface” for its newest branch personnel. ??‍♀️ https://t.co/5ldRUQMDqZ

There have been been other developments related to the Space Force as well. The first seven people to enlist directly into the U.S. Space Force have graduated from basic military training at Joint Base San Antonio-Lackland.

The five men and two women, who graduated Dec. 10, were among 414 recruits who completed seven and a half weeks of training, according to an Air Force announcement.

The induction of Raymond points to the growing importance of space in American life. It also highlights the increased importance of the domain to the military. “We recognize it clearly as a warfighting domain. And we also know that we, the United States, we’ve got to maintain capabilities in that domain if we are going to continue to deter great power war,” Milley said during the ceremony.

So, who cares. Despite all of the hype, we still have no idea what the Space Force is, what it is supposed to do and how is it supposed to do it? Is it going to be a bunch of nerds sitting at computers crunching numbers? Or sitting in a dark room monitoring radar screens while they sip lattes? Are they going to be orbital traffic controllers? Are they going too man the extensive US orbital military facilities? Oh, wait, scratch that last one. There are NO US military orbital facilities. Are they going to “guard” the US from alien invasion? LoL, right. So, what the heck is the US Space Force? Why do we need it? Get back to me with answers.

I’m sure the Chinese will find them a great asset.

Splitting the SF branch out of the Air Force the way the AF was split out of the Army makes sense.

Each of our armed services operates in a specific environment. The Army operates on land. It is essentially a land warfare service. The navy and Marines 9Which are part of the Naval Service] operate on water and in littoral areas. They are essentially a water environment service. The Air Force operates in the atmosphere above the land and water. Now, while there is some overlap between the services, they essentially breakdown along targeting threats in specific environments. Now, realistically, there is no real threat above the atmosphere. Could satellites be knocked out by another Earth-based power? Certainly. But, we have no significant counter satellite presence in space. Can an orbital anti-ballistic missile weapons system stop a land based bombardment? Sure. If one existed. Could offensive missiles be launched from orbit? Sure. If we had any facilities for that.

The problem we face here is we are creating a military force before we have either the need for it or the resources it needs to undertake its mission. In fact, we have no clearly defined mission for it, at the moment. Armies were created to protect areas and to project force outside the area to be protected. Navies were created to move armies across water and then to protect the transport forces from attack while undertaking that mission. The air forces were created to protect armies, and navies, from aerial attack, to attack enemy formations and installations in support of ground and water-borne forces and to transport ground forces through the air. When the US Air Force was spun-off from the US Army the USAAC already existed and was a large, highly specialized force doing a specific job. And, it is still butting heads with the Army and the Navy for mission definition and funding. The US Space Force, has no facilities, no personnel, no assets, no materiel, and no real mission definition. In other words, it has to be built from the ground up. What this will cost and how long it will take will depend upon exactly what its mission statement turns out to be. It will be in competition with the other services for defense funding. And, nothing which the USSF can do in the near future another service can not do or is not already doing.

At this point in time, the current area of responsibility of the USSF could be handled much more efficiently if a coordinating command was established to coordinate the portions of the existing agencies which handle military matters outside the Earth’s atmosphere, as SOCOM does with US special operations units. When the US establishes a manned military presence in extra-atmosheric space, then a Space Force might be needful. Until then it is an answer without a question.

Unless…. we are not alone in the universe. Other than that, we could have turf battles over land or sea launch of sub-orbital and orbital missions. The Air Force is already orbiting its unmanned vehicle with its extended missions. Having the appropriate vehicles for any mission needs to come first… unless we already have them.

The military did have Project MISS (man in space soonest) and Yeager was head of a military-based astronaut program competing with NASA. So, nothing new… unless ….

ICBMs are staying in the Air Force, at least for now.

I can tell you with certainty, if the general public knew what the Chinese were up to in orbit and around the moon, it would scare the shit out of you.

With no disrespect intended, I can safely say I don’t think you have any special knowledge of what the USA does and does not have when it comes to exo-atmospheric missions, facilities and equipment. Just because it hasn’t been made public doesn’t mean it doesn’t exist. How long was the SR-71 working before it was publicly acknowledged?

And without actual knowledge of our true capabilities, your pronouncements and complaints seem unserious.

Waiting until we have any or all of the things that you mentioned means being behind the curve as other countries develop space capabilities, instead of the USA defining the curve and leading the way.

Being there first means having the advantage of being the defender, which is not an advantage that should be ignored. Possession of the high ground is militarily well-accepted as a way of forcing the enemy to work around YOU, vs the opposite.

FYI: The term “I am Groot®” is already registered to Lori Lightfool.

I’m sorry, I find this whole “Guardian” thing too much like Big Brother.

I don’t see any other option for their eventual service academy.

I would have gone with “Patrolmen” as a nod to Heinlein. But I guess in the 21st century the prime consideration was having a gender-neutral name.