Colorado hopes to be headquarters of new branch

When it comes to pen and phones, it appears nobody wields them as well as President Donald Trump. He has officially signed the National Defense Authorization Act (NDAA).

The NDAA, among other action items, launches the U.S. Space Force as the sixth branch of the military.

In a win for Trump, the NDAA establishes Space Force as the sixth branch of the U.S. military, with a goal of protecting U.S. assets in space from threats from Russia and China. The new service will be part of the Department of the Air Force in a structure similar to the Marine Corps’ relationship to the Navy and will be led by a four-star chief of space operations.

At Friday’s ceremony, Trump officially announced he would nominate Gen. John Raymond to be the chief of space operations. Raymond is currently the commander of U.S. Space Command.

“For the first time since President Harry Truman created the Air Force over 70 years ago – think of that – we will create a brand new American military service. That’s such a momentous statement,” Trump said. “With my signature today, you will witness the birth of the Space Force, and that will be now officially the sixth branch of the United States Armed Forces. That is something really incredible. It’s a big moment. That’s a big moment, and we’re all here for it. Space, going to be a lot of things happening in space.”

The U.S. Air Force, which now oversees Space Command, reports that there is a great deal of interest in the next step in the process.

Air Force officials on Friday told reporters that people are clamoring for information on how to join the military’s latest branch. The short answer is, they’re going to have to wait a while.

President Trump officially signed the Space Force into law Friday, but for now, all that means is everyone at Air Force Space Command will now be assigned to Space Force. Over the next 18 months, officials said, the finer details of manning and training the new branch will be hammered out and set in motion.

“It’s going to be really important that we get this right. A uniform, a patch, a song ― it gets to the culture of a service,” said Air Force Gen. Jay Raymond, the head of Air Force Space Command and U.S. Space Command, who will lead Space Force until a chief of space operations is confirmed by the Senate. “There’s a lot of work going on toward that end. It’s going to take a long time to get to that point, but that’s not something we’re going to roll out on day one.”

For now, the 16,000 active-duty airmen and civilians who work at Air Force Space Command will be assigned to the Space Force, but nothing else will change. Uniforms, a rank structure, training and education are all to be determined, and for the foreseeable future, Space Force will continue to be manned by airmen, wearing, Air Force uniforms, subject to that service’s fitness program, personnel system and so on.

Colorado officials are optimistic that the state will be the location of U.S. Space Force headquarters.

“With U.S. Space Command established in Colorado Springs earlier this year, and the bulk of the Space Force personnel currently serving on Peterson and Schriever Air Force Bases, this NDAA solidifies our community’s position as the premier defense space community of the United States,” Rep. Doug Lamborn, R-Colo., said in a statement.

On a personal note: My son just received his congressional nomination to the U.S. Air Force Academy in Colorado Springs. He has a letter of assurance to the Academy, which is a conditional appointment that will be completed when the nomination is processed. I will have an official post when all the documentation is processed.

My long-term plans for his future are coming along nicely. 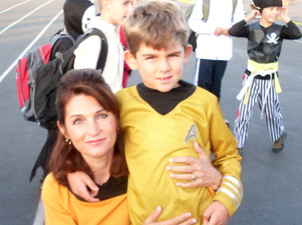 For those of you wishing to join the U.S. Space Force, or wishing to discover more, the official website is up and running.

How soon will we be able to test directed space born kinetic weapons? I suggest that Iran and North Korea would make excellent test subjects.

Its unlawful to threaten ex preZes or theirs future prez wives.

Congratulations to you and your son, Leslie. One of my goals has been to change my last name to “Kirk”, marry, father a son I will name “James Tiberius”, then see what happens.

Thank you so much. The congressional nomination was truly a wonderful Christmas season blessing.

Yes, 2nd that. Quite an achievement!

If a state is hostile to the 2nd amendment, they should not have a military presence. If they don’t believe in self defense, then they get no dollars for defense.

Love the concept, never liked the name. Reminds me of too many bad black and white sci-fi movies.

I consulted the space charts in my space chair while eating my space food. Quick, get me my space gun. It’s time to go!

Thank goodness you didn’t opt for the red Trekkie shirts

Unless your name is Montgomery Scott.

I’d rather see massive cut backs to the gov workforce. Don’t forget what Trump gave the dems. 12 weeks off for child birth,adoption or fostering I think it was.
Millions to dem fronts under the “gun violence” banner, a bunch of that money probably snuck back to dems as campaigh donations.
Overall I think it was 1.2 trillion to keep the bloatfest leeching off taxpayers.

This reorganization will work itself out. As an Air Force veteran, the Space Cadet jokes write themselves. Aim High!

First of all, the Space Force is a fiction. So far, it is nothing more than 200 people monitoring, controlling and maintaining military satellites. This is being handled just fine by the USAF. Speaking of which, so far, the Space Force is part of the USAF. It is little more an office and a letterhead. When the USAF, the most recent branch of the military services, was inaugurated, the US Army Air Corp had several thousand fixed wing aircraft as well as a number of dedicated airbases. It actually had assets, when it came into being, as well as a command structure. None of that exists for the Space Force. Now, when the USactually has a significant human presence outside the Earth’s atmosphere, which reuires a military force for protection, then the Space Force would be a viable idea. Right now, it is a boondoggle.

The Air Force’s natural “jurisdiction” ends at the beginning of Space, where there is no more air.

Not only that: everyone seems to be considering the “Space Force” as operating in orbit.

Think about the moon: it is inevitable it will be as competitvely militarized as the Artic and Antarctica.

Well, when we put an operational base on the Moon, then we can think about stationing military units there. But we do not even have a viable effective habitat in low Earth orbit. We have to travel through about 6200 miles of atmosphere before we reach the upper limit of the atmosphere.

The Space Force is a dream whose time has not yet arrived. Someday it may. Then we can think about wasting money and resources on it.

Well, the natural “jurisdiction” of the US Navy would end on the beach. But, we have Marines and SEALs running all over the entirely landlocked nation of Afghanistan. So, that argument kinda sinks like a stone.

When the Marines and Seals operate on land, they become Army. I wasn’t born yesterday.

You only need a “significant human presence” if you’re going to hold a parade. I expect most of the Space Force will be autonomous. Which, despite its name, would still need control. And, even more importantly, a budget. Who gets to control that budget? Hopefully, not the Air Force.

“…and I have no idea what the other branch is supposed to be.”

Coast Guard. And while the Marine Corp is technically a part of the Navy, it is almost always listed as a separate branch of the US Armed Forces.

The need for a separate space force is quite clear if you do not wish to be subservient to some other country. Eventually we will have to dominate space militarily or be dominated militarily. And while it’s possible the Air Force could handle it, there are competing interests that would likely be harmful.

The fact that the infrastructure is small in the beginning should not be surprising. It takes time to create the force required and all the technology is evolving.

In all seriousness: how does anything like this get done, considerng the lunatics and morons that are in congress.

Mac the 5th branch is the coast guard, and I advise you don’t go around telling either of them they’re not a separate branch. I’ve never met a marine who thinks he’s part of the navy.

Nope. The Coast Guard is NOT a part of the DOD. It is a pat of Homeland security and operates as a civilian law enforcement, customs and maritime rescue agency. They only become a military organization in times of war and then they are under the command of the USN. They are not an independent military service. As for Marines not knowing that they are part of the US Navy, well, they are Marines, after all. The USMC is part of the US Navy and, though they do have a seat in the Joint Chiefs of Staff, there is no Secretary of the Marines. They are simply naval infantry. Sorry to burst your bubble. But, there are only three independent branches of the US military.