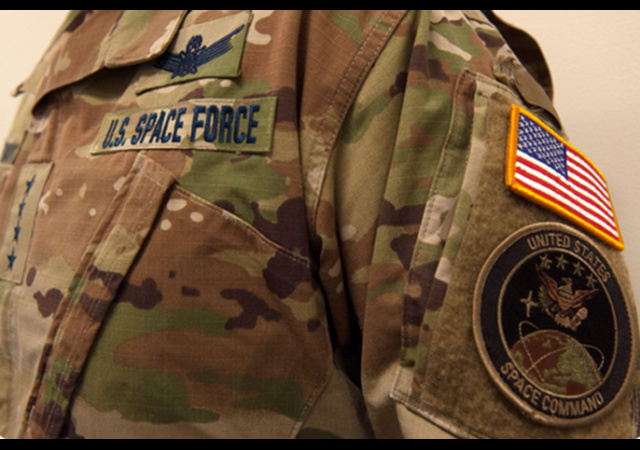 I make it a point to watch as many of the rallies President Donald Trump holds as possible.

One of the most consistent aspects of these events is the absolute enthusiasm the crowds have for the new US Space Force. This week, the Pentagon revealed the uniform for the newest branch of our military.

“The first #SpaceForce utility uniform nametapes have touched down in the Pentagon,” the service branch tweeted from its official account, attaching a photo of the uniforms.

The uniforms were welcomed with praise by some, including the official Twitter account for the U.S. Navy, which called the clothing “out of this world” in a tweet.

“What are the coordinates? Let’s trade,” the military branch added.

Despite the success of the Space Force roll-out, people must deride President Donald Trump’s efforts whenever and wherever possible. The #TrumpDergangementSyndrome-inflected media partnered with the #Resistance-bots in social media, once again, to create and promote fake news mocking the uniform.

The reaction to the US Space Force’s new outfit has been less than complimentary – with most pointing out the design will not help troops blend in during space missions https://t.co/9YZX2WpXux

Wouldn’t this make more sense if they were going for “camouflage?” pic.twitter.com/A7XEAiWBah

Though I will give bonus points for a “Star Wars” mention and a deduction for a trite Trump reference:

Gotta say, I’m a little disappointed with the camo. And considering your leader, this is probably more on point. pic.twitter.com/aw4q9KT1MP

However, solid reasons were provided for not going with an homage to “Star Trek:”

Space Force could have done worse coming up with its utility uniforms. At least it didn’t order up unis from the original Star Trek series. Imagine the horrible complex troopers wearing the red shirts would have had going into battle. pic.twitter.com/CUblI7smwS

The force explained its rationale in a tweeted response. It said it was “utilising current Army/Air Force uniforms” and “saving costs of designing/producing a new one” in doing so.

“Members will look like their joint counterparts they’ll be working with, on the ground,” the force added in the tweet.

Members will look like their joint counterparts they’ll be working with, on the ground.

In related news, Trump had his first official briefing with the US Space Force:

The goal of the briefing, which was also attended by Defense Secretary Mark Esper, was to inform the president of upcoming milestones as the Space Force gradually comes into being, said Pentagon spokesman Jonathan Hoffman.

“Gen. Raymond has a very specific, very thorough plan on things that need to take place — moving pay systems, assigning individuals to the Space Force, looking at basing, figuring out if we’re going to be transferring bases to the Space Force,” Hoffman told reporters.

The meeting was about “laying out for the president what the process looks like — what are the next steps, what are the things that are going to be happening over the next couple months — to give him an expectation,” he added. “This is something [Trump has] been very forward leaning on and is something that he is interested in, so we’ve been trying to keep him informed.”

Trump’s detractors will fail at reducing America’s support of the new military branch, and this is just the lastest in a long line of botched attempts to derail the President’s America First agenda.

Well, I for one have always thought common-camo was dumb*. That goes back to the 80s.

Personally I don’t understand why Space didn’t just go with the old dark blue “flightsuits” from the missile guys? It makes much more sense, and there’s probably a bunch sitting in a warehouse somewhere.

Remember how cute Brad Manning looked in his beret?

I’m glad I served when the navy still had shambray (sp) and dungarees.

I still like those and the old style caps.

The badge is what is important. The uniform will be what the base uses. For example in my State 89 slots have been designated, all tech and scientists. They will wear the uniform of The Hawaii Air National Guard, with insignia of Space Force. All will be stationed at the Pacific Missile Range on Kauai.

The flame resistant OCP uniform is intended to be used by all U.S. armed services, despite resistance by some branches who wish to be “unique” and “distinctive” in their uniforms.

When I was a kid, being a space cadet had a different connotation. Haha, camouflage for the space force seems to uphold a tradition.

These are children who throw tantrums much like chimps throw feces because they’re bored, nasty, and petty. Tomorrow will be another tantrum.

I do think the formal uniforms should be black with silver piping, and using pips and cuff bands for officer rank.

The fatigue uniforms should not ultimately be camo, but dark blue jumpsuits.

Camos always look unkempt no matter the pattern or who is wearing them.

I think REAL camo for the Space Force would be a solid black base, all over, with a lot of little LED point-lights scattered randomly across it.

They are using up some surplus stuff. I am all for that.

BBC should STFU given they cone from a place whose idea of protecting it’s people was a ban on long kitchen knives.

The British – always there when they need us(US).

A typical illustration of Twitter making people illiterate, both literally and in regards to facts. Those are not the Space force uniforms, just the nametapes. The original tweet makes that clear. The subsequent tweet makes it even more so. But the twitter trolls won’t let facts get in the way of their never-ending quest to feel intellectually superior.

Camo is ubiquitous in the military; the Navy has a blue camo, for heavens sake, and that’s no sillier than space camo. In neither ocean nor space will there be any infantry that need to blend in, but in point of fact any soldiers not actually on patrol in a war zone don’t need camo either.

Enlisted men like them because they are supreme at hiding stains, making laundry that much easier. You have to wear SOMETHING as UOD; camo is as good as anything.

But TDS allows nothing good to come from this administration,

Thank you! I was wondering “Why camo”?

I don’t care what the fashions of the Space Force are, just so long as they keep the Air Force out of it.

What the “Space Force” wears is irrelevant to the mission. They could wear tank tops and Bermuda shorts and still get the job done, especially as their operations area is an air conditioned office space on some US Air Force Base. These uniforms are all for show, because, in today’s society, REAL warriors wear camo, no matter how ridiculous, or in the case of the US Navy Blueberry camo, how detrimental it is to the well-being of the troops in combat.

My complaint is exactly why we even need a “Space Force”, which is an independent branch of the military, at this time. It sounds good, but budgetarilly and logistically, it is just dumb. By the way, hpw much is the Air Force charging the Space Force for the surplus uniforms? Historically, an exchange of materiel from from one agency’s budget to another requires a like transfer of value from the receiving agency’s budget, unless directly ordered by the CINC [POTUS]. However, I suspect that the Air Force considers the Space Force simply part of their agency, and rightly so.

Could it be all about breaking apart the…

That is what military man on an early Dick Cavett show called it?

How so? All this does is create another independent military agency fighting for a part of the existing military budget.

I’ll maker a prediction here. Look for the “Space Force” to be absorbed BACK into the US Air Force. Within the next eight years.

Fortunately for you no one will remember it.

The space force will render the Air Force obsolete for anything but regional conflict. It will take more than 8 years though. Probably 25.

It’s short sighted thinking that space forces should be run by slightly above ground forces.

It’s nice to see that Social Media is focusing on the really important issues of the day. SMH

I am looking forward to seeing the first rock dropped from space on Iran. What would be best, missile or sphere shape? Will they be steerable? How much mass would one need to drill down into their nuke manufacturing facilities?

It did beg a joke.

Seriously: The uniforms should be skin-tight gold foil, with silver boots, and neon green berets. The women’s uniforms should have plunging necklines. Dark glasses should be mandatory as well. Ray guns should only be worn on duty.

OCP or multicam is smart, considering the Army and Air Force are already buying it. Army has black embroidered rank and nametapes, Air Force has spice brown rank and nametapes. I do like the blue embroidery for the Space Force. Air Force had blue embroidery on their BDUs and ABUs. Would have liked to keep that versus the current spice brown which is hard to read if you’re more than 5 feet away. The flag is reversed from the Army and AF though, which is to say it’s the way most of America thinks it should be. I like the reverse flag on the right shoulder, the Army in full color and the AF in spice brown. If you’re going with full color flag, at least keep it on the right shoulder.

“Social Media” is an ass.

Think that means their Democrats!

I suppose that the US Space Force will always deploy in groups of 5, because if there was one thing that Star Trek proved, it was that the 6th man on an “away mission” would always die before the first commercial.

My suggestion for the Mark II uniform:

Now don’t go ape over it!

It is a uniform , not a costume almost none will ever get outside our atmosphere.

How I love those classic Japanese monster films!

As it is improbable that Space Force will be shipping out to Moonbase Alpha anytime soon, the choice made seems practical. I don’t care what the Comic-Con twits tweet anyway.