Former Cuomo Aide Claims He “Sexually Harassed” Her For Years

Former Cuomo Aide Claims He “Sexually Harassed” Her For Years

“Yes, @NYGovCuomo sexually harassed me for years … I could never anticipate what to expect: would I be grilled on my work … or harassed about my looks” 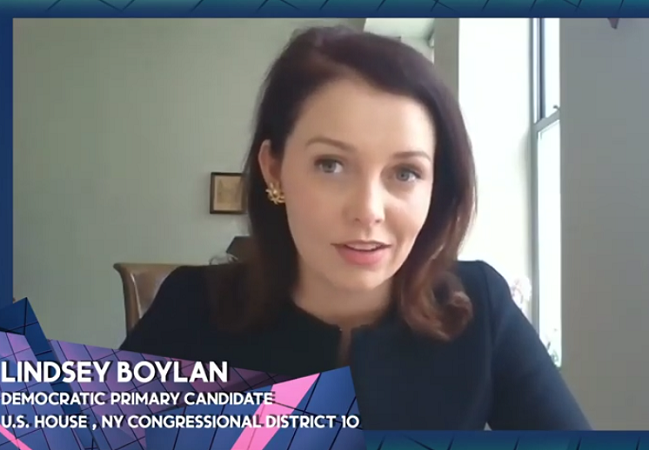 A former aide to Gov. Andrew “Killer” Cuomo claimed Sunday that he “sexually harassed” her about her looks for years.

Self-proclaimed progressive Lindsey Boylan, who is currently running for Manhattan borough president having failed in her 2020 bid for Jerry Nadler’s House seat, claimed last week that Cuomo’s office was a “toxic team environment” and that “people were deathly afraid” of him.

Boylan took to Twitter to drop her latest allegations against Cuomo (you can read the whole thread at this archive link).

Yes, @NYGovCuomo sexually harassed me for years. Many saw it, and watched.

I could never anticipate what to expect: would I be grilled on my work (which was very good) or harassed about my looks. Or would it be both in the same conversation? This was the way for years.

A former aide to Gov. Andrew Cuomo now running for Manhattan borough president alleged Sunday morning on Twitter that her ex-boss “sexually harassed” her for years — but refused to share any more information.

. . . .  From March 2015 through October 2018, Boylan served as Cuomo’s deputy secretary for economic development and a special advisor, according to her LinkedIn profile.

But as quickly as Boylan dropped the bombshell — in a thread about workplace sexual harassment, starting with her mother’s own experiences — she made clear she had no interest in sharing further details.

“To be clear: I have no interest in talking to journalists. I am about validating the experience of countless women and making sure abuse stops,” she wrote in another tweet.

“My worst fear is that this continues. And as @FKAtwigs said yesterday, my second worst fear is having to talk about and relive this,” she added, referring to the musician now suing ex-boyfriend Shia LaBeouf, alleging an abusive relationship.

That “second worst fear” may explain why Boylan didn’t come forward when the #MeToo movement swung into full gear with the 2017 bombshell revelations about Harvey Weinstein.

Given that Cuomo is currently and inexplicably exalted by the activist media and Hollywood, it seems likely that he will get a “Biden pass.”

yeah.
why now, open ended accusation, unwilling to talk to reporters over it.
time will tell.

So they can destroy her without consequence to show everyone else to shut up and take it.

Stupid woman, the guy has a D after his name. He is literally untouchable.

Remember that all females were removed from the Vice President’s Secret Service detail.

Albany insiders have informed me that this “bombshell” is clearly Russian disinformation with all the usual earmarks. There has also been a suggestion that Trump may be behind this completely unfounded allegation.since Ms. Boylan has long had a secret friendship with Ivanka Trump.

Is there a male feminist who isn’t into sexual harassment?

If a man thinks every man does it and the woman is always telling the truth about it (like Joe Biden) it means there is a skeleton in his closet.

So she is “such a strong woman” who still put up with this harassment for at least a decade and is so traumatized by it that she won’t talk about it to “journalist” propagandists because she doesn’t want to relive it.

How is this strong? Notice her real quest is for power, yet isn’t willing to and hadn’t been willing to confront a bully who ‘everyone is deathly afraid” of, which would have shown her to be a strong woman of character.

I don’t know if this is true or not. Though, knowing Cuomo and hearing his condescending talks, I could see it being true. He is a mafia wanna-be. His father was connected, and this small brained offspring thinks it makes him tough. Cuomo coming against a real man would have him being shown for the Pillsbury Doughboy that he is really is.

This “progressive” woman is a waste product who should never have any power. She is though, the perfect Democrat, a coward at heart.

I see this going no where. Can’t touch the popinjay Cuomo. He is a white Obama.

Frankly, we’ve got a lot bigger problems right now than some female who didn’t have the brains to quit a job with a boss she didn’t like.

He sexually harasses you, and you continue to work for him for YEARS, and say nothing.

Cowards like you are exactly the reason Democrats like Cuomo do it. They know you aren’t going to say anything to hurt The Party.

Enjoy what you voted for.

Agree 100%. No one should believe this woman. As much as I hate Cuomo, this is pure BS. It doesn’t pass the smell test. She literally mentions it without any prompting to gain points but doesn’t want to talk about it. You can’t have your cake and eat it too. Either he did it and should be punished or he didn’t and you are lying in a pathetic attempt to advance your flailing career trajectory.

Judge Cuomo by his and his party’s standards, not yours. Therefore, in this case the woman must be believed, no matter how implausible. We must demand his immediate removal from office.

This is their standard towards their opponents. Hold them to their own standards. When they fail, decry their hypocrisy.

This. I don’t believe her, but he should be estopped from claiming innocence, having denied other men that same right.

Let them fight to the death. Both are liberals so they won’t be missed “Outside of a Small Circle of Friends” (hat tip to Phil Ochs, the song he sung).

I really, really don’t like Fredo’s brother. He is a despicable, low life. But someone, after waiting years, makes unverified accusations and then refuses to even talk about it, comes off as an opportunist, self promoting loon.

She’s as bad as he is.
Both political whores.

That’ll be the first thing he looks into when he becomes Attorney General.

She could take a lesson from president-in-waiting-elect Harris and just suck her way to the top.

If it’s not reported to the police at the time, it didn’t happen.

At worst she’s making an economic trade and has changed her mind now.

Reporting it to the police at the time proves it’s not an economic trade. Lacking that, no deal.

If you let go on for years, then you accepted it as a condition of your employment…..so shut up!

I’d like to believe her but since she claims to be a “progressive” she is clearly willing to lie to get her way. I also wonder why she stayed with Killer Cuomo and why stab him in the back now.

I posted the following elsewhere. Just as suitable here.
Sexually harassed her about her looks— hmm… tough one. Did he say “You look good enough to eat?” That would be harassment. “You’re looking good today.”? That would be a compliment. “You look like crap today!” which I’ve heard used on many male colleagues after a rough night. Valid criticism roughly put when you supposed to maintain a professional appearance. All sorts of nuances. But complaining YEARS after the fact? Nope, don’t care. Since Dictator Cuomo is a democrat, just assume he did do it, because he probably did, and the woman involved accepted it because he had the right views, therefore, it wasn’t wrong. Hell, you can be a Democrat hero when you leave women to drown! What’s a few words? Not like he got a Lewinsky in the governor’s office from her.