After weaponizing #MeToo against Brett Kavanaugh, now Milano says: “There is something to the idea that people are going to weaponize #metoo for political gain.” 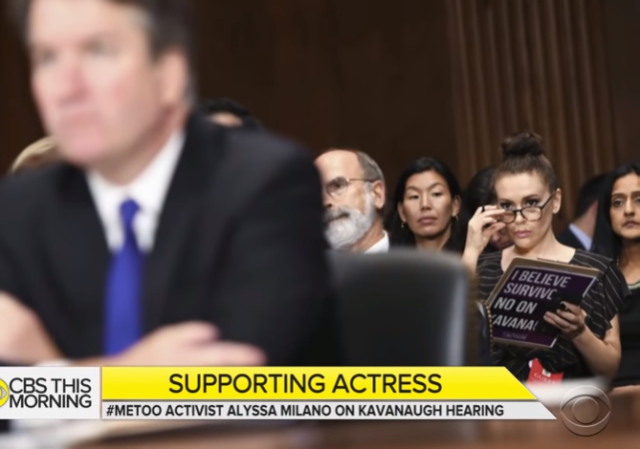 Activist actress Alyssa Milano made a spectacle of herself at the Kavanaugh hearings. She was at the forefront of the #MeToo movement and gave multiple television interviews during the hearings demanding that all women be believed.

When it comes to the allegations against Joe Biden, the presumptive 2020 Democratic nominee, she is now urging caution and demanding due process.

Alyssa Milano is defending her decision to stay silent in the wake of a recently surfaced allegation against former Vice President Joe Biden by former Senate staffer Tara Reade, who claims he sexually assaulted her in 1993.

Milano, 47, spoke with radio host Andy Cohen on Monday during his SiriusXM broadcast and when Cohen brought up the fact that, once again, Milano had been a trending topic on Twitter. He gave the actress the floor to speak on the matter and she did so, choosing her words gingerly.

“So it’s actually quite a serious reason, I think. So I’ve been I endorsed Joe Biden. And there have been accusations against Joe about sexual assault,” Milano began. “I have not publicly said anything about this.”…

She explained to Cohen: “If you remember, it kind of took me a long time to publicly say anything about Harvey [Weinstein] as well because I believe that even though we should believe women and that is an important thing. And what that statement really means is like, you know, for so long, the go-to has been not to believe them. So really, we have to sort of societally change that mindset to believing women.”

“But that does not mean at the expense of not, you know, giving men their due process and investigating situations and giving, you know, it’s gotta be fair and in both directions,” Milano added.

What a stunning turnaround.

I explained my silence on the allegations against Joe Biden in this clip.

I am still endorsing @JoeBiden. Listen to this clip to find out why. #MeToo #TimesUp https://t.co/6v7udELEzv

There is something to the idea that people are going to weaponize #metoo for political gain. Just look at the replies here and look to see who those accounts are supporting in the primary. There always needs to be a thorough vetting of accusations.

#BelieveWomen does not mean everyone gets to accuse anyone of anything and that’s that. It means that our societal mindset and default reaction shouldn’t be that women are lying.

I believe, along with many others in this space, that accusations need to be investigated with due process for the accused. This is the only way for the movement to work & create the change we are fighting for.

Anything less puts the entire movement and women’s equality at risk.

Milano is getting absolutely dragged for this.

Remember all the mainstream media attention Milano got for sitting behind Kavanaugh and scouring and weeping? There’s no corroborating evidence Kavanaugh and Ford have even met. This is a former Biden staffer. Now Milano is “whoa whoa, we have to hear him out!” https://t.co/G1D9z7acjd

You had no such parameters when Christine Blasey-Ford leveled 100% unsubstantiated bullshit at Brett Kavanaugh.

Also, think back to her specifically and her obnoxious custom clipboard. pic.twitter.com/IgvAWW3AUl

Even her #MeToo ally, actress Rose McGowan, is calling her out in a brutal way.

You are a fraud. This is about holding the media accountable. You go after Trump & Kavanaugh saying Believe Victims, you are a lie. You have always been a lie. The corrupt DNC is in on the smear job of Tara Reade, so are you. SHAME https://t.co/B7NHK4k09K

If it wasn’t already clear that for some people, this was always about politics and power, it is now.

Whitehall, at 47 she’s not so young. Easy mistake to make as she tweets like a 12 year old. She’s old enough to know better, just not smart enough.

You expect more?? She’s an actress. Without a script and a director she would have trouble ordering a latte.

notamemberofanyorganizedpolicital in reply to amatuerwrangler. | April 7, 2020 at 2:51 pm

She’s a stupid and insane idiot.

“The Greeks had a word for it.”

Nah, just an narcissistic ignoramus, thinking she can be the next dumbass to be elected to congress.

She’s childless. It accounts for a lot of her bad attitude.

This because she
Can’t
Understand
Normal
Thinking

Look at the bright side. We might get this Kung Flu thing, but we aren’t married to Milano. Pity her husband.

Stupid show pony doing and saying stupid things without the close attention of her director and scriptwriter. This is not a surprise.

I did like the photo of her seated behind Kavanaugh – where she’s wearing her special “smarty smart I’m so smart” prop glasses to convey that she’s a super special big thinkie librarian type.

A complete pinhead, whose 15 minutes of fame should have passed some time ago.

But we are talking about her.

It’s an oldie, but applies so well to Milano:
“If it weren’t for double standards she’d have no standards at all.”

her only claim to fame involving “doubles” has nothing to do with any standards EXCEPT for the two items sitting on her chest.

Yep, #MeToo but only for opposition & deplorables

She, along with Blasey-Ford, should be remembered if or when the Equal Rights Amendment rears its ugly head again.

I tried to listen to the recording last night, I had to turn it off when she mentioned the phrases due process and due diligence. Amazing how quick an opinion can change if someone is associated with a D or an R. I thought justice was supposed to be blind and unbiased.
Beautiful to see Rose call her out like she did.

You could call this detritus out but shes not even smart enough to understand we all see through her BS.

Did this dumbbell even graduate from High School? She was best know for sleeping with anything in Hollywood that wore a pair of pants. Failed engagements and marriage, multiple abortions, Milano is really someone who deserves all of this attention.

The age old problem with weapons is they can always be turned back on you (or your side) at some point.

Politically, this always happens. Of course this little, small minded actress can only see politics, not reality. Their fallback position is always to ignore their own hypocrisy and act like it is the most natural position to take, despite being the complete opposite when it was FOR their “cause”.

The first rule of social liberal club… Friends with “benefits”? It’s not rape-rape.

Also, the discredited “rape culture” fielded by Feminists to justify the planned parenthood protocol, the wicked solution, including selective and cannibalized-child.

Can anyone explain to me why anyone gives her attention beyond the time of day? She seems to be just another slow-witted Hollywood bimbo pretending to be relevant by reading someone else’s script. Was she ever been in anything of substance that I should know about?

It’s a Pro-Choice, selective, opportunistic “secular” religion (i.e. behavioral protocol) or “ethics”, religion’s relativistic cousin. #MeToo suffered from too many friendly fire casualties, and, in the long-term, was clearly politically congruent (“=”), just not favorable to their special and peculiar interests.

“…people are going to weaponize #metoo for political gain.”

She has no clue as to the irony of what she said. Why do “famous” people have short memories?

“If it wasn’t already clear that for some people, this was always about politics and power, it is now.”

You can narrow it even further.

For the left it boils down to one issue… pro-abortion you get a pass. Pro-life (or perceived to be pro-life) the accusation alone makes you guilty.

It’s that simple for this crew.

“Weaponizing #metoo” is like “weaponizing” an M-16. It is a weapon; it was designed as a weapon; there’s nothing you can do to it to weaponize it any further.

Another self-aggrandizing, hypocritical Dhimmi-crat narcissist from the entertainment industry. In other words, someone who wrongly believes that their opinions deserve deference and attention.

Remember, kids: if alexandra cortez, omar, maxine waters, tlaib and half the morons in the congressional black caucus can get elected to congress, ANYONE can.

If it wasn’t already clear that for some people, this was always about politics and power, it is now.
————————————-
You’re way overestimating the dem base intelligence Mike. Logic and reason might as well be in Sanskrit to them.

In other posts/stories she’s call “an activist”. Activist is a code word for “unemployed pain in the ass”.