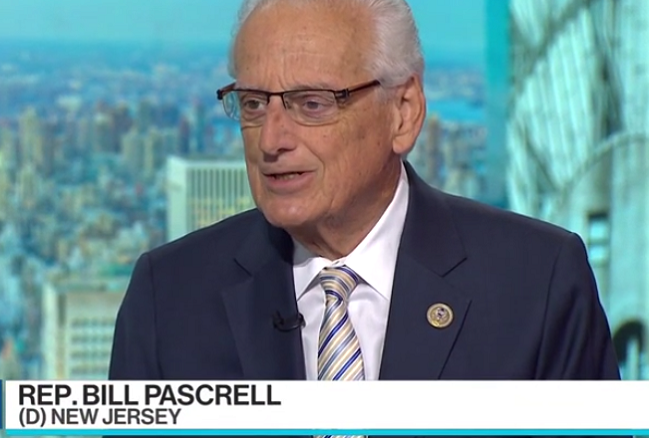 Invoking the 14th Amendment regarding the disqualification from public office of anyone “engaged in insurrection or rebellion,” Pascrell asserts that these Republicans committed “unbecoming acts that reflect poorly on our chamber” and as such should not be seated.

Today I’m calling on House leaders to refuse to seat any Members trying to overturn the election and make donald trump an unelected dictator. pic.twitter.com/icTmGKCpuR

If you can’t view the embed in the tweet, here is Pascrell’s statement: 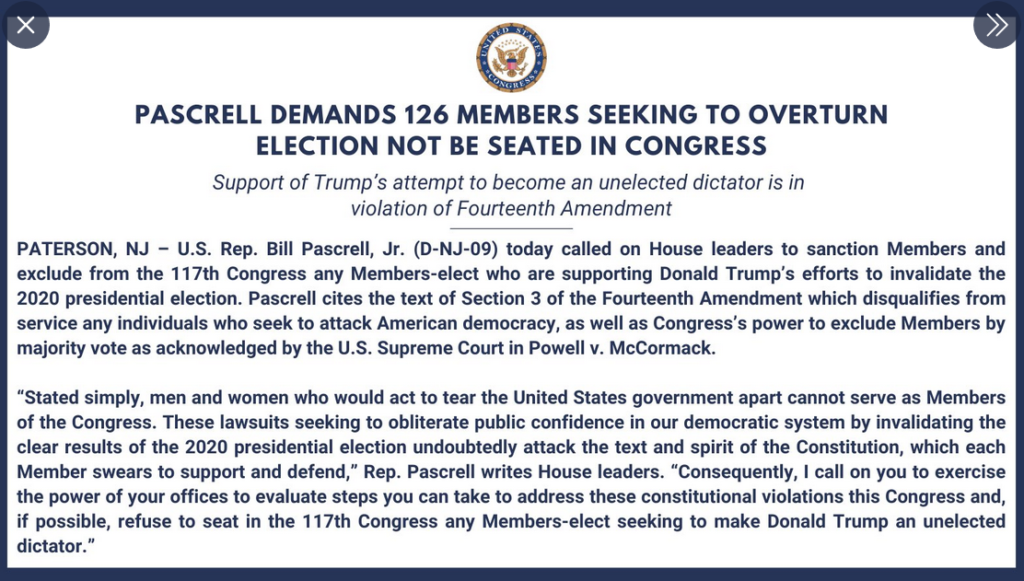 New Jersey Congressman Bill Pascrell has called on Speaker of the House Nancy Pelosi to refuse to seat 126 Republicans who signed on to a Texas lawsuit aimed at throwing out election results in four states that backed President-elect Joe Biden.

The Supreme Court declined to hear the case in a short, unsigned statement on Friday evening but by that time 126 GOP members of the House had joined an amicus brief in support of the suit.

Pascrell, a Democrat who represents New Jersey’s 9th congressional district, invoked Reconstruction Era “safeguards to cleanse from our government ranks any traitors and others that would destroy the union.”

In a letter to Pelosi, Pascrell cited Article 1, Section 5 of the Constitution which “gives each chamber of Congress the ultimate authority to decide their membership.”

He also invoked the 14th Amendment, passed in the wake of Southern secession and the Civil War. Section 3 of the amendment forbids anyone from holding office in federal or state government who “having previously taken an oath, as a member of Congress, or as an officer of the United States, or as a member of any state legislature, or as an executive or judicial officer of any state, to support the Constitution of the United States, shall have engaged in insurrection or rebellion against the same, or given aid or comfort to the enemies thereof.”

Sometimes life comes at you fast.

To no one’s surprise, Pascrell’s equally TDS-deranged fellow traveler and socialist “Squad” member Minnesota Rep. Ilhan Omar backs this ludicrous (and not a little ironic) demand that Representatives be barred from taking the office to which they were duly elected by voters in their districts.

They are ANNOUNCING exactly what they plan to do in the very near future, and the fucking RINOs are not listening.

Oh, the RINOS heard loud and clear and they are quaking in their boots

Does this mean Pascrell is against reaching across the aisle for bipartisanship?

notamemberofanyorganizedpolicital in reply to technerd. | December 12, 2020 at 8:31 pm

He is Communist Chinese Bribed I guess and we know he approves of gangster felonies such as cheating in and stealing elections…..

The Jersey sissy is a reach-around kind of guy. NYC sewer rats would vomit from his shadow or a wafting scent from across the river.

Actually, the lawsuit was about RESTORING the will of the people while overturning and correcting the blatant mass-scale outright fraud

Is that an Epstein Island tan, or what? NJ seems to promulgate a culture of hate, ill temper and malice. This ugly cretin desperately needs to have the dog-doo drop-kicked out his heart so Satan can finish him off.

May one of Ilhan’s machete wielding Muslims can take him to the waters edge and deliver him unto his life-purpose.

I’m not a lawyer, in the middle of a bunch of lawyers, so why am I the first one to bring up Powell v. McCormack, where the SC stated quite plainly as the Primary Holding:
“An individual who meets the constitutional requirements for being a member of the House of Representatives may not be denied a seat there upon being properly elected.”

George, what you’re not getting is that no Supreme Court decision means anything anymore. We don’t live in a Constitutional Republic anymore. We live in a corrupt oligarchy,like Russia’s. Russia’s oligarchy steals, but they are not treasonous to Russians.

America’s oligarchy is comprised of ALL traitors.

One doesn’t have to be a lawyer to see an iron curtain of fascism being closed around us. Covid is a complete scam, and it’s working. The precedent has been set and we’ll never go back. Most galling is that corrupt clown faucis stands to make millions on it.

Roland Friesler might as well be on the Supreme Court.

Watch our for a criminal case comes up called United States v. Georgfelis. It just might be coming – for all of us.

TY,
I was just reading about that myself. SMH

What does anyone expect from these fascists anymore?

We need to get away from these people. They’re going to start the instrumentalities of killing us soon. Then it will be too late to avoid massive bloodshed.

I urge everyone to move the discussions. If German Jews had their eyes more opened in the 30’s, the Warsaw Ghetto uprising (and it’s destruction) would not have been necessary.

They’re going to start the instrumentalities of killing us soon

If you haven’t noticed they have already started. 305,000 dead in the United States and 1,613,868 worldwide to date. And they’ve just started. By the time the pogrom is complete it’ll make the Holocaust look like a walk in the park.

Only about 30,000 of those are WuFlu. The other 90% were killed by co-morbid conditions and WuFlu was the 5% push to take them over the edge. Expect a drop of 270,000 deaths next year because those contestants have already left the pool.

So now filing papers in court to redress a possible wrongful action (election fraud) is now considered to be “undermining our democracy” and “rebellion” and should be punished to the fullest extent according to democrats. The Republic is well and truly dead. I’m surprised it lasted as long as it did.

They should do it. The Supreme Court cannot step in. The only solution will be seizing the traitors and restoring the republic by the means it was originally instituted.

With all due respect, this Congressman can go pound sand. Someone needs to go “help” him.

Symptom of TDS is saying crazy things all the time.

I demand we don’t certify the 14 states with election issues.