Jake Tapper: “The Democrats walked away from the $1.8T deal, was that a mistake?”
Sanders: “That’s what I’m saying!” 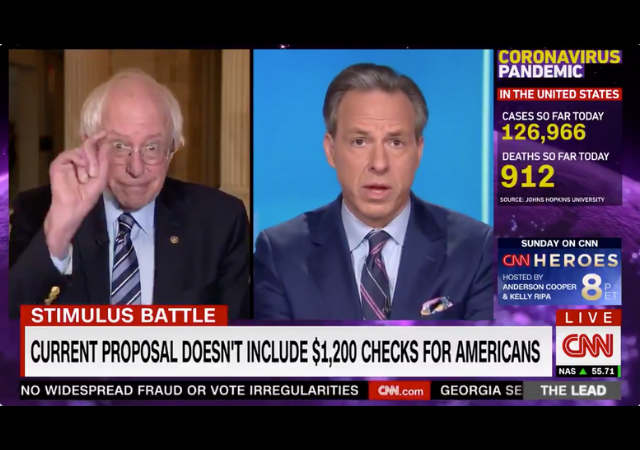 Everyone who has followed the issue knows that House Speaker Pelosi tanked any potential COVID relief package because it would have been a political win for Trump just before the election.

Now that the media is projecting Biden has won the election, Pelosi is back at the negotiating table and is willing to take far less than what was “acceptable” during pre-election negotiations. Pelosi even admitted she tanked negotiations for purely political purposes.

And Bernie Sanders is not happy.

During a segment on CNN, Sanders noted that the failure to make a deal was a huge mistake as now any deal that will be made will provide far less relief.

This will go down in history as one of the Democrat Parties’ most shameful acts: blocking relief the American people desperately need in the face of a pandemic.
pic.twitter.com/8EAYK0BzL8

In layman’s terms Yeah we screwed your ignorant backsides so what are you gonna do about it now? We already cast your vote for us.

I see what you did there…no typo

“one of the Democrat Parties’ most shameful acts”

*This claim is disputed.
Approximately two months would be required for a supercomputer to rank all known shameful Democrat acts.

Oh I’m so fact-checking this as true!

All the DEMS know how to do is steal………

Garbage. That “deal” was never agreed to by Purple Hands Mitch, who’s got his twenty million dollars and wants the peasants to have nothing.

You’ll find no McConnell fan in me.

But what grotesque rationalization do you use with regard to Biden’s embezzling? Of Hillary Clinton’s? Of John Kerry’s? Of Pelosi’s?

McConnell is a piker compared to them.

Bernie was crickets when these poor people he supposedly cares about were suffering away, because it would be politically inconvenient to speak up before the election.

What a joke. He’s just trying to carve out his “I’m different” niche from his corrupt caucus to make himself look better.

Yet the only dem senator to lose their seat in 2020 was Jones in Alabama and most likely every dem senator up in 2022 will be returned to office. The two Georgia seats shouldn’t be close but they will end up that way.
No dem has the guts to stand up to Pelosi and run against her for speaker, just a flock of sheep. They all bow to their queen and toe the line.

Given current judicial trends expect almost every Republican Senator to lose in 2022. It will be a fraud-driven bloodbath.

Reflect on this point for a moment. Bernie Sanders is, in this instance, demonstrating that he is the most reasonable and responsible voice of d/progs in Congress.

Bernie Sanders. The voice of reason in the d/progs party. Bernie is taking on the role of the grown up. Scary times.

This is why he couldn’t be allowed to win the nomination, which was handed to Biden through fraud that nobody wants to even look at regarding the Democrat primaries. The narrative that James Clyburn got out the black vote in SC on Super Tuesday will live in infamy.

It’s no wonder that the true progressive believers in Sanders despise him now. They want him to say these kinds of things when it matters. Bernie knew it was pure politics to reject the original deal before the election but only says it now. His former supporters now know that a guy who has spent his life as a DC insider will put his own interests before theirs.

Time was that real Vermonters never would have elected this guy, but the state is now full of NYC and Boston refugees.