“That is a total game-changer. A new president and a vaccine,” Pelosi said when asked why she was suddenly now open to a smaller relief package than she was before the election. 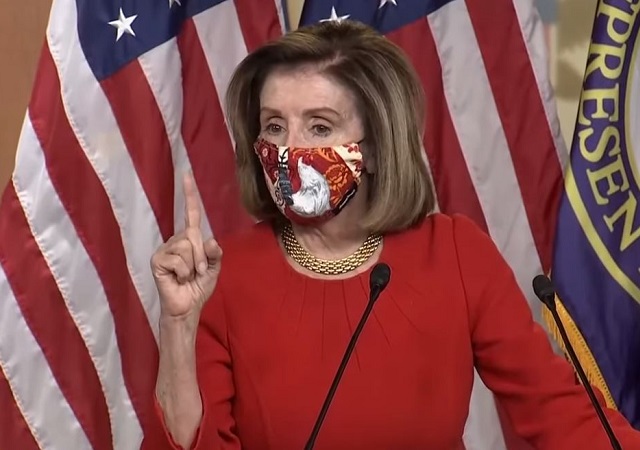 President Trump made it a priority over the last several months to point out to the media that Democrats were using the Wuhan virus pandemic and stalling a relief bill in a deliberate attempt to undermine his presidency and hand him a defeat on Election Day.

In response, reporters would mock and ridicule his claims, feigning outrage that he would dare level such a heinous accusation against his political opposition.

After all, what Trump was saying, in a nutshell, is that House Speaker Nancy Pelosi and other Democratic leaders in the House were willing for people and businesses to continue suffering under months-long government-mandated lockdowns without federal relief in order to blame Trump for the lack of relief and to give Democratic presidential nominee Joe Biden a big legislative victory in the event he won the election.

It was indeed a heinous claim, but one that those of us paying attention from the cheap seats knew to be true. And on Friday during her weekly press conference, Pelosi confirmed she purposely held up the coronavirus relief bill because of politics.

Pelosi said during the presser that she was now open to a smaller relief package than the one she and other House Democratic leaders had been holding out for prior to the election.

When she was asked what changed between the months where there was a stalemate between the House and the Senate and now, she snapped at the reporter for asking the question, and then admitted what changed for her and other Democrats was that we (presumably) have “a new President and a vaccine”:

Reporter: What has shifted now, when they’re on board with this piece that’s come out of the Senate?

Pelosi: Perhaps you missed what I said earlier. Joe Biden, committed to ending and crushing the virus and having a Build Back Better America initiative, Build Back Better. A vaccine – answer to our prayers, an answer to our prayers – of 95 percent effectiveness in terms of Pfizer and Moderna, and there may be others coming forward. That makes – that is a total game‑changer: a new President and a vaccine.

So, there’s nothing to – these are different. What was then, before, was not more of this. This has simplicity. It’s what we’ve had in our bills. It’s for a shorter period of time, but that’s okay now, because we have a new President – a President who recognizes that we need to depend on science to stop the virus, a President who understands that America’s working families need to have money in their pockets in a way that takes them into the future, without any of the contraptions of any of the other bills that the Administration was associating itself with before. (emphasis added)

Well, it was clear before the election that we would be getting the vaccine in record time thanks in no small part to Trump’s aggressive push for one with Operation Warp Speed. Biden had nothing to do with it.

But what wasn’t clear before the election was who would win the presidential race. So what Pelosi’s change of heart boils down to is not the vaccine, but the fact that Biden has been declared the winner by the media. As a result of that, Pelosi dropped her opposition to a shorter-term relief bill so he would get credit for it, not Trump.

She said as much below. Watch:

Nancy Pelosi says she is willing to do a smaller covid-19 deal citing the "game changer" of Biden's election and vaccine development:

"That's OK now because we have a new president. A president who recognizes that we need to depend on science…" pic.twitter.com/Egk9kxWWJV

When another reporter, CNN’s Manu Raju, followed up on her answer by asking her if it was a mistake for her to say months ago that she was not willing to accept half a loaf, Pelosi again snapped:

Speaker Pelosi. Look, I’m going to tell you something. Don’t characterize what we did before as a mistake as a preface to your question, if you want an answer. That was not a mistake, it was a decision. And it has taken us to a place where we can do the right thing without other, shall we say, considerations in the legislation that we don’t want. No. That was it.

Pelosi for months has said she wouldn’t accept half-a-loaf on stimulus – but now they’re looking at a $900 billion deal affer Pelosi had been pushing for $2.2 trillion. So I asked her if it were a mistake not to accept half-a-loaf months ago. “It was not a mistake,” she shot back

Nancy Pelosi admits it was her “decision” to block coronavirus relief for small businesses getting crushed by Democrat lockdowns.pic.twitter.com/S2ub8Q5tz3

?? Nancy Pelosi is finally admitting she let businesses die and families struggle for months all because of the election.

Democrats see this entire crisis as leverage to play politics.

So it was all about politics. Well, we already knew that.

I’m sure the countless small business owners who watched helplessly as their livelihoods were destroyed will understand. https://t.co/lYILoAbJK2

TRANSLATION: I didn't pass a bill to help struggling Americans because it would've helped Trump.

Now that Biden will get credit, I'm ready to make a deal. https://t.co/ISoxDENU2e

In other words, @SpeakerPelosi just confirmed what everyone with half a brain knew: she was playing cheap power politics with American health and lives

Does Olbermann still give the "Worst Person In The World" award? Because I have a nominee for its hall of fame. https://t.co/cMocj7tPPN

this was part of her plan. inflict as much pain as possible on working americans to help biden win.

Sadly, Pelosi saying the quiet part out loud about her true motives for holding up the relief bill will blow over in a short amount of time courtesy of the very same media who relentlessly accused Trump, without evidence, of being ok with Americans dying by the hundreds of thousands from the coronavirus if it meant the economy could get back on track.

We will never know for sure how many innocent people lost their businesses, jobs and/or homes, nor how many starved or gave up hope because of the cold-blooded, politically-calculated stunt Pelosi and other Democratic leaders in the House pulled over the bill.

But thanks to Pelosi herself, we do now know beyond a shadow of a doubt what her ulterior motivations were: To defeat Trump and gift Biden with an unearned victory – no matter how many people had to suffer the back-breaking, devastating consequences of her willful, deliberate inaction.

Trump hasn’t lost yet. We know it because CNN and The New York Times tell us that the opposite is true.

Was there any doubt the drawn out demands/ escalated rhetoric wasn’t all for Dem Politics/PR?

Well if nothing else comes out of this maybe Romney and the other pearl clutching, weak kneed r are taking notes. Whatever else Speaker Pelosi is, she isn’t reluctant to use the raw political power of her office to advance her teams agenda.

Excerpt from Romney’s notes: “Apparently Nancy is the real power in Washington. Hmmm. How can I knock her off and take her job?”

Romney isn’t “weak kneed”, he’s on the other side.

“But what wasn’t clear before the election was who would win the presidential race. So what Pelosi’s change of heart boils down to is not the vaccine, but the fact that Biden has been declared the winner by the media. As a result of that, Pelosi dropped her opposition to a shorter-term relief bill so he would get credit for it, not Trump.”

I read this a little differently: she doesn’t have to load ALL her pork into a single, must-sign bill anymore, because she can just send as many individual pork bills to Biden any time she wants without fearing a veto.

“A new president and a new vaccine” …

Isn’t a wonder how the vaccine miraculously appeared on 11/4, with the election* of Biden*/Harris* on 11/3 ? If they can do that in a day, imagine what they can do in 4 years!

Still praying the rug gets pulled out from under Nanzi and Trump wins.

praying that eil doers are caught in their own snares. from proverbs

I’m five years older than she is, but I want fervently to outlive her by at least one day.

Can hardly wait to read her obituary and regret that she has not had the decency to count beads in front of her master.

Kiss the ring, Nancy. You have earned a trivial place in hell.

Why should Pelosi lie about her motivation? The media knows what they were and will bury them. The manufactured election worked out so well that any Democrat race is now predetermined. Her seat will always be secure, from now on.

It is amazing to see how upset she becomes when a reporter actually asks a real journalistic question. It is telling that she actually believes that no one will ever question her fraudulent motivation and actions.

They are desperate to get in a new stimulus bill now to prop up the economy or at least lessen its decline when Biden’s new lockdown plans go into effect. They also need to offset the rise in taxes that the left has planned.

And on the topic of bags for scum… I am just now struck with what an ugly mask Pelosi chose to wear for that photo. I don’t know what the design is supposed to represent, but once you put it on Nancy, the overall effect is The Red Death. I mean, it looks like bleached bone showing through. What a seriously impaired fashion sense.

I’m not convinced that crushing people under the weight of additional taxes and inflation from printing the money for the stimulus is actually helpful.

It’s Wimpy economics: “I will gladly pay you Thursday for a hamburger today.” I was disappointed in Trump for going along with it. On the other hand, while Wimpy will be just as unemployed Thursday as he is today, I suppose the hope is that the check recipients won’t be.

Trump did not lose; Democrats cheated!

I’ve heard Pelosi’s daughter smile approvingly, while describing her mother’s ability to cut off people’s heads “without them knowing it.”

Well, little girl, nice to see, you bathing in your wealth, approve of your mother starving average Americans, for her power trip.

As one of the Founders noted, the country was designed for a MORAL people, and is wholly inadequate to govern and IMMORAL people. Pelosi has demonstrated this Over and Over and Over again, has have the dems for decades.

I’ll dance and spit on the grave of this repulsive creature when she finally does the world a favor and kicks it.

This will make for great campaign commercials in 2021. Make it far easier to take back the House.

Pelosi put the gains of her party and all of its members ahead of the wants and needs of her constituents. Poopsaloosey is a disgrace to the American Way of life! Everyone who voted her into the leadership position are tainted by this deplorable POX!