That “distinguished” senator from Connecticut. 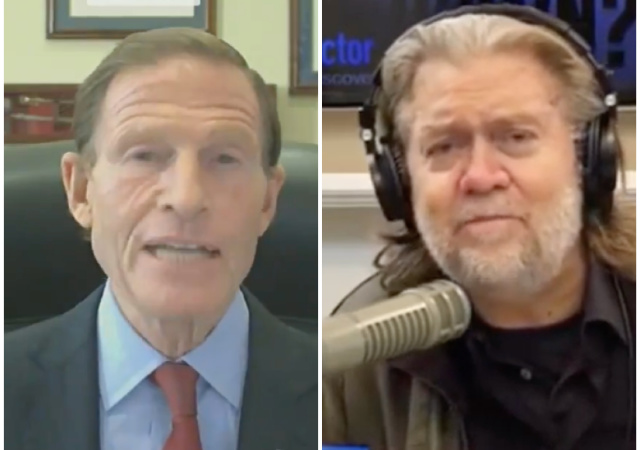 Facebook CEO Mark Zuckerberg and Twitter CEO Jack Dorsey faced another round of questioning in front of the Senate Judiciary Committee.

A few moments stuck out to me: Sen. Richard Blumenthal (D-CT) told Zuckerberg to ban Steve Bannon and Dorsey admitted it was a mistake for the platform to ban The New York Post‘s story on Hunter Biden’s laptop.

Former White House Strategist Steve Bannon got in hot water on November 5th when he said he wants the heads of Dr. Anthony Fauci and FBI Director Christopher Wray on the White House lawn.

Blumenthal cannot understand why Facebook hasn’t censored Bannon. What Bannon said was gross, but not a crime.

"How many times is Steve Bannon allowed to call for the murder of government officials before Facebook suspends his account?"pic.twitter.com/07cK8NhGFD

“Steve Bannon in a Facebook Live video called for beheadings of Dr. Fauci and FBI Director Wray for not acting more favorably toward President Trump,” Blumenthal said. “How many times is Steve Bannon allowed to call for the murder of government officials before Facebook suspends his account?”

Zuckerberg said that “the content in question did violate our policies and we took it down. Having a content violation does not automatically mean your account gets taken down.”

“No, that’s not what our policies would suggest that we should do in this case,” Zuckerberg replied.

Dorsey addressed Twitter blocking The New York Post‘s story on Hunter Biden. However, he once again said the company blocked the story “pursuant to a 2018 policy against spreading hacked materials.”

Except nobody hacked anything.

“They decided — and maybe for a good reason, I don’t know — that the New York Post articles about Hunter Biden needed to be flagged, excluded from distribution, or made hard to find,” he continued, adding, “That to me seems like you are the ultimate editor.”

Graham concluded, “The editorial decision at The New York Post to run the story was overridden by Twitter and Facebook in different fashions to prevent its dissemination. Now, if that’s not making an editorial decision, I don’t know what would be.”

Sen. John Cornyn (R-TX) asked Dorsey if he realized that by banning the story it received even more attention.

“We made a quick interpretation using no other evidence that the materials in the article were obtained through hacking, and according to our policy, we blocked them from being spread,” Dorsey testified. “Upon further consideration, we admitted this action was wrong and corrected it within 24 hours.”

Dorsey went on to say that Twitter told the Post how they could unlock their account by deleting their tweet with the article, and that they would be able to then tweet it again. The Post instead pushed for Twitter to reverse their decision to block them in the first place. Dorsey said at the time they did not have a process for doing this.

“This incident demonstrated that we needed one and so we created one we believe is fair and appropriate,” he said.

Men and women such as Blumenthal, Feinstein, Pelosi and Schumer firmly believe that the ordinary rules of society do not apply to them. They are free to park in “No Parking” Zones.

Senator Brylcreme is a loathsome reptile.

notamemberofanyorganizedpolicital in reply to MAJack. | November 18, 2020 at 1:59 pm

Yes. Who does he think he is? Nancy Pelosi?

Da Nang Dick needs to take an “Introduction to Euphemisms” course. I myself was threatened publicly right in these pages by LI’s most prominent pedant with “FU with a pointed stick!” a couple of days ago. Should I be filing charges? Felonious assault by euphemism? Harrumph!

Not “with a pineapple, sideways”? Seems to be less than fully enthusiastic, then.

Since Ohio State has not yet obtained a trademark on the word “The” it’s OK to call him The Da Nang Dick.

C’mon, Danang, surely you understand that not every statement is intended to be taken literally?

Take your statment about being a Vietnam vet. You weren’t literally trying to mislead the public into thinking you served in SE Asia, were you?

On second thought, maybe he was.

Off with their heads!

Stolen Valor needs to slither back down his hole.

I realized long ago that to be a Democrat member of the Senate one has to have a complete lack of self awareness and no sense of shame whatsoever. That is what allows Elizabeth Warren to rail against social injustice and systemic racism, it allows Dick to speak about honesty and honor and enables Kamala Harris to tell tales of oppression and little girls waiting for the bus.

What was DaNang Dick’s reaction to Kathy Griffins’ “artistic expression” of the beheading of a sitting President? Was he equally indignant? Somehow I doubt it.

There’s still a question concept Blumenthal’s category of service. It’s probable that he was not a “ferry” pilot, but a “fairy” pilot.

Sid is a complete reprobate.

Several Congress Critters were openly calling for “cancelling” of their enemies. Hirono directly demanded that Trump be removed from public platforms. More interesting was watching them try to explain themselves face to face to the conservatives who have been censored.

The mandate against “misinformation” is at the heart of what they’re doing. A mere platform isn’t in a position realistically to vet the quality of the information people post on it. Nor is that the proper function of a mere platform.

It certainly doesn’t have the resources to vet content reliably in real time, which is what would be needed for such a function to be effective — that would require not only more capacity for scanning content than any of them could afford with their current business model, it would also require access to a perfect source of facts.

There aren’t that many Prophets of God in the world, and if there were they wouldn’t all be willing to work for Twitter or Facebook.

If only pie-face international were still in business…

Speaking as a former Marine, I can say, without fear of contradiction, that if Da Nang Dick were back in boot camp, he’d be the guest of honor at multiple blanket parties.

Just once I’d like to see one of these CEOs school these RINOS on their own CDA and dare them to violate the First Amendment. Make them own it.

The thing is, I doubt Dorsey actually knows the difference between what Twitter is doing and what a publisher does. He correctly denies that it is acting as a publisher, but he can’t put his finger on why. The actual answer is that, unlike a publisher, Twitter does not vet all submitted content and actively decide which submissions to publish and which to omit. Rather, everyone is free to tweet whatever they like, and most tweets never even come to the company’s attention, but occasionally one does, and if the employee who reads it doesn’t like it, they delete it.

I am surprised he was never charged with a stolen valor crime.

Because there’s no such crime. The act of congress that purported to ban it was struck down as unconstitutional.

That’s too bad. He deserves prison.

Leftists are so sure no one will ever call them on their lies that they no longer even bother to try to make them convincing.