How better to bribe moderate Democrats into voting for their radical agenda? 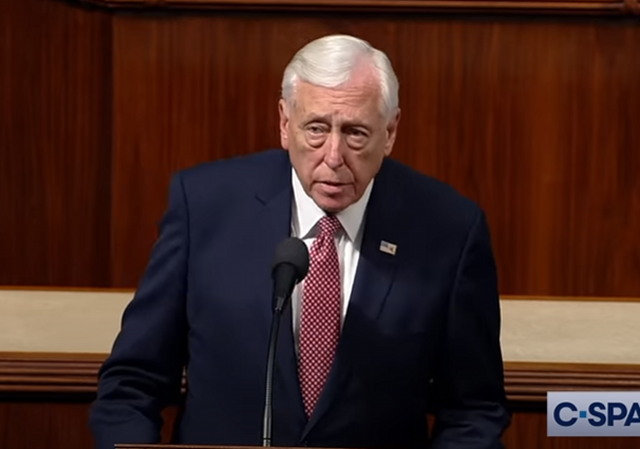 As the complete disaster Democrats experienced downticket continues to sink in, Democrats are scrambling to figure out how to govern with a razor-thin House majority.  To that end, Nancy Pelosi’s right-hand man and the number two House Democrat Steny Hoyer is floating the return of earmarks.

The Democrats’ House majority is smaller than that of any since FDR was president. As we’ve noted here at LI, this means that Pelosi can’t afford to lose more than four (or so, all races have not yet been called) Democrat votes on any piece of legislation.  So naturally, Democrats are eager to resurrect the earmarks that the Tea Party was instrumental in stopping back in 2011.

Americans saw the way earmarks were used to bribe ‘blue dog’ Democrat into voting for ObamaCare—who can forget the “Louisiana purchase” or the “Cornhusker kickback“?—, and the American people made it crystal clear that they would not tolerate their hard-earned tax dollars being spent on buying votes for legislation they reject.

A ‘moratorium’ was placed on earmarks in 2011, and in 2014, then-House Speaker John Boehner banned a return to earmarks.

The argument against the ban back in 2010 was that earmarks are small stuff; they consist of something like “one half of one percent” of the federal budget and therefore didn’t mean anything in the grand scheme of things.  But that was always a lazy, ill-conceived, and bogus argument.

The actual earmark might cost next to nothing (comparatively speaking), but the disastrous legislation passed by bribing individual congressmen and woman to vote for ObamaCare (or the likely upcoming Green New Deal or the abolition of police and/or prisons) is catastrophic and often incalculable in terms of the impact on our society, culture, the standard of living, the rule of law, economy, etc.

Democrats, with warring socialist and moderate factions, seek a means to tempt their members into voting for legislation they know their constituents loathe.

And apparently, their first ploy will be a return to earmarks.  Note the Orwellian turn of phrase Hoyer employs here.  Earmarks aren’t bribes for member votes on radical, unpopular legislation. They are the ability for members “to invest in their states.”

House Democratic leaders are proceeding with plans to bring back earmarks for the 117th Congress, according to Majority Leader Steny H. Hoyer.

Hoyer, D-Md., said in an interview Friday that sometime after the Appropriations Committee’s new chairwoman is elected the week of Nov. 30, she will begin soliciting House lawmakers to “ask for congressional initiatives for their districts and their states.”

. . . . Hoyer said he’s optimistic that both Republicans and Democrats will participate in the process if earmarks come back into the picture.

He isn’t concerned that Senate Republicans’ permanent ban on earmarks will complicate negotiations on appropriations bills if the GOP keeps control of that chamber following two Georgia runoffs on Jan. 5.

Democrats and Republicans have been talking about bringing back earmarks since just after Speaker John A. Boehner, R-Ohio, added a ban to House GOP rules in 2011. Senate Democrats followed a few months later with the support of President Barack Obama.

Earmarks won’t work on the socialist true believers, so this has to be a bid to strong-arm moderates—or those in red or purple districts pretending to be moderate—into backing unpopular legislation that would otherwise cost them their seat.

With earmarks back on the table, these members would be able to go back to their constituents and say, “why, yes, I did vote for gun confiscation, but, hey!, I got our state a ten-year exemption. Yay me!” or “why, yes, I did vote to bankrupt the nation and kill jobs, but look! Shiny new bridge to nowhere!”.

Earmarks should be left on the ash heap of history. Period.

“….. or those in red or purple districts pretending to be moderate—into backing unpopular legislation that would otherwise cost them their seat.”
That is all it ever comes down to, keeping their seat, not about what is morally or ethically correct. The people of their districts mean nothing to them.

Prescient when he said it, was it not?

“Our Constitution was made only for a moral and religious people. It is wholly inadequate to the government of any other.”

notamemberofanyorganizedpolicital in reply to pfg. | November 24, 2020 at 7:06 pm

Because, for the left, everything is about money.

notamemberofanyorganizedpolicital in reply to irv. | November 24, 2020 at 7:08 pm

And molesting children every which way they can…..

The left is still counting on its embedded RINOs to bail them out.

Yup, and earmarks would help with that too.

Because its always about voters getting a piece of the action. The move is always left as it’s easier to live beyond one’s means when someone else has to pick up the tab. Wants become needs… hamburger isn’t fair when someone else can afford steak. Once the carcass has been picked clean everyone will be equal.

Sure, just keep feeding the fire. We have a bonfire of our own in the works for 2022.

Bribing “moderates”? Sure! And it could also be a case of the thieves dividing up the stolen property.

I’m a contrarian on earmarks. Personally, I would rather have congress earmark certain money for certain purposes rather than have some Deep State apparatchik make the decision. At least with earmarks, we know most of the time where the money is going. With only a general requirement to spend money, it is often difficult to track down exactly how the Executive Branch doled out the money.

Every thing that represents vote fraud in the United States is solely owned by the Democrats, and has been, for decades, if not centuries.

They could only complete their treachery with the direct involvement of the scumbags of the GOP.

If the GOP was a building, we’d turn it to the ground and build a park where it once stood. This is the ONLY way to salvage our country without secession.