“I want to make it so there’s no incentive for PolitiFact, USAToday, Lead Stories to sign-on to be a fact-checker” 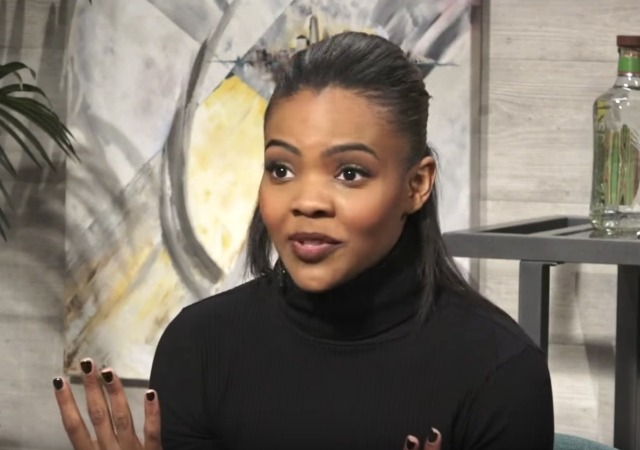 I’ve long been an admirer of conservative firebrand Candace Owens. She’s a smart as a whip and absolutely fearless champion of conservative principles—of limited government, of the Bill of Rights, and of American values that want to lift up every American of every race, religion, creed, etc. rather than dragging everyone, excepting the leftist political elite and their favored entities, down to an “equitable” level of abject poverty and blind reliance on government for their daily bread.

Owens founded the extremely successful #Blexit movement: a call for black Americans to leave a Democrat party that took them and their vote for granted, that tossed a few bones (in the form of lofty but never-fulfilled promises) their way every four years, but that ultimately backed extreme and radical positions that work to actively harm black communities and black lives.

Owens resisted Big Tech tyranny before it was cool.  Back in 2018, she took to Twitter to “test how Twitter would react to Sarah Jeong tweets if targeting Jews and Blacks, instead of Whites.”  Spoiler: she was suspended from Twitter as a result.

Owens’ point, however, about leftist intolerance and bias against “wrong think” was made.  Yes, she demonstrated, Twitter does indeed censor “wrong” thoughts, even back in 2018 when they weren’t “protecting Democracy” or “protecting public health” or whatever Orwellian lunacy they use to justify their 2020 attacks on anything and any account they deem to be engaging in wrong think.

The question becomes, for each of us, what on earth can we DO.  We all want to DO something . . . something that doesn’t involve vandalism, looting, arson, assault, murder, and various other acts of lawless mayhem engaged in by the Biden-voting antifa/BLM left.

Rather than sinking to these depths of leftist lawlessness, Owens decided to take a different page from the well-worn and (too often) successful leftist playbook and threatened legal action against Facebook for censoring, via Politifact, one of her posts as “false.”

Guess what?! I am OFFICIALLY suing the “Fact-Checkers” who are really just activists. https://t.co/nvLBLZaQEH https://t.co/UGbJzMrMk0

At 8 Months pregnant, I unfortunately cannot fight on the ground alongside patriots like I am used to, but I am taking every measure to fight these communists in the court room. It is my goal to expose these lying “fact-checkers” one by one. @JoeBiden is NOT the President-elect. pic.twitter.com/hW4NLpK4tc

Incredibly— they didn’t just rate my post false, they authored an entire article along w/ it, explaining why Joe-Biden IS the President-elect.
Once I lawyered up, they retracted the article & issued a correction.

The victory may seem minor, but it’s vital to chip away at the left’s insane narrative that any opinion, policy position, or agenda item they back is “The Truth” and that anything anyone else might think or dare say in response is misinformation, racist, stupid, racist, hick, racist, xenophobic, racist, tens kinds of phobic, racist, fascist, and also racist.

“I wanted to show that these fact-checkers just lie, and they usually go unchecked because most people don’t have the money, don’t have the time, and don’t have the platform to go after them — and I have all three,” she said.

. . . . Owens, who’s currently suing fact-checkers from USAToday and Lead Stories, explained to The Daily Wire that she knew she had to reach out with legal representation if she wanted to get results with this latest false fact-check. She said that in her experience, when she’s tried to appeal fact-checks through the system, she’s been stonewalled.

“These people are sitting back thinking they’re the gods of tech; opinion-checkers, they’re censorship lords,” the conservative said.

. . . . “I want to make it so there’s no incentive for PolitFact, USAToday, Lead Stories to sign-on to be a fact-checker,” she said. “I want to show that they can get sued and lose money. So, what is the point of them taking on that liability on behalf of Facebook?”

“At the same time, Facebook is distancing themselves from fact-checkers,” Owens continued. “We went after Facebook and sent them a letter, and they said, we have nothing to do with the fact checkers. … So, if Facebook isn’t coming to their aid, and they’re being sued by individuals, there will be no upside. And that’s sort of the corner we’re trying to pinch them into.”

Owens wants the censorship stopped for the millions of Americans sharing opinions or information against the one accepted narrative from the Left. If she wins her legal case, she said, she could set the precedent for a massive class action lawsuit against Facebook from others who’ve allegedly been censored.

Big Tech is counting on the compliance, goodwill, and even apathy of moderates and the right. Yet, Owens shows that under the mere threat of legal action, they not only demur in the face of their own wrongdoing but prove that they are emperors with no clothes.

She is a fighter, we need more like her

notamemberofanyorganizedpolicital in reply to Skip. | November 30, 2020 at 3:11 pm

She will end “owning” Facebook before she is finished with them.

murkyv in reply to notamemberofanyorganizedpolicital. | November 30, 2020 at 5:47 pm

Isn’t that about the same number Hillary won?

daniel_ream in reply to notamemberofanyorganizedpolicital. | November 30, 2020 at 4:42 pm

You didn’t read the article.

Danny in reply to notamemberofanyorganizedpolicital. | November 30, 2020 at 6:58 pm

Losing the electoral college when losing the popular vote by 4% we haven’t seen such a thing since 2012.

We lost it is time to deal with it, hopefully before it is too late to try to win two Georgia senate seats.

I have been wrestling with the “coat tails” issue ever since the election. Is there any (other) historical case where down ballot did much better than the top of the ticket? Aside from any claimed incidents of fraud, is this suggestive in and of itself?

Is there any (other) historical case where down ballot did much better than the top of the ticket?

Yes, it happens regularly. Think of all the times a Republican won the presidency while the Dems won both houses of congress. Something like 40% of voters routinely split their tickets, and presidential coattails are something that only happens sometimes, with a very popular candidate.

Why don’t we write/refer to a certain someone as …

In the same way as we refer to Barry Bonds* and Pete Rose* ?

Will the supremes throw the flag and give Trump the touchdown he (and we) so rightly deserve? He ran all over the democrats.

Flogging is still a sentence, isn’t it?

Fuzzy, “they … demur in the face of opposition,” not demure.

And, folks, don’t get on me for being a [email protected]|, or some such. Take a different tack.

Actually each is correct, and as used in post “demur” would be correct. Just sayin’ 🙂

Anyone can do this. It’s not hard and does not need lawyers or threats of lawyers.

FB censored me three times in 2020. I objected three times using the FB tools provided. Each time the Fact Checkers responded with “We’re sorry we got this wrong. We reviewed your post again and it does follow our Community Standards.
Your post is back on Facebook.”

My approach was to create new aliases twice, and then to dump Facebook the third time. Facebook is a really sleazy company.

Did they publish a correction admitting they were wrong? Her goal is not to get her post restored.

But unless lawsuits are involved, nothing will improve. Their process will be your punishment. A right delayed is a right denied.

Sometimes, to win a war, a losing battle must be fought. To do so requires a virtue even greater and rarer than courage: resolve.

Without Thermopylae, there would be no Marathon.

Sorry, but Marathon occurred 10 years before Thermopylae. It is actually the other way around. After their defeat at Marathon, at which the Spartans did not participate due to a restriction involving the full moon, the Persians came back 10 years later under their new ruler, Xerxes I, came back with the largest army and navy ever assembled to crush Greece. This time the Spartans gave Greece time to prepare by thwarting the Persians at Thermopylae for 7 days.

What we need are a few ambulance chasers that can see the money rolling in in suing the tech monopolies.