Kim Young wins CA-39 after losing in 2018; 2 Latino Republicans flip Florida districts, as it is clear the GOP had a far stronger showing in House races than the “experts” projected. 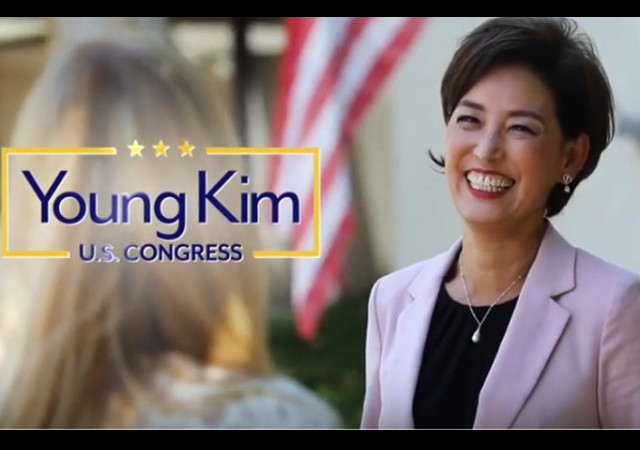 Legal Insurrection readers may recall that in 2018, Republican contender Young Kim for the congressional district 39th seat was ahead in election-night counting. She lost the election, but accused winner Democrat Gil Cisneros of “physically tampering” with those ballots.

Now Young Kim is finally on her way to the US Congress.

“I would … like to thank everyone who spent countless hours volunteering, donating or who reached out to a friend or family member with our message,” Kim said in a video message posted to her Twitter page. “We would not be here without you and you are always the driving force propelling us forward. Thank you from the bottom of my heart. I’m honored by the trust you have put in me.”

Kim will be joined by two Florida Latino Republicans, who flipped their districts red.

While Democrats were able to keep control of the House, both Salazar and Giménez are among a handful of Republicans who were able to flip certain seats Democrats won in 2018.

Both Salazar and Giménez benefited from the increased support for Trump and Republicans among South Florida Latinos.

Owens, a former NFL player, author and frequent Fox News guest, is now ahead of McAdams, Utah’s only Democrat in Congress, 47.5% to 46.93% in the district that includes portions of Salt Lake, Utah, Juab and Sanpete counties.

Neither candidate immediately commented on the latest numbers, which appear to make it extremely difficult for McAdams to overtake Owens. Owens has been out in front for the past week, after trailing the first-term congressman. The final county canvass of votes is Tuesday.

During the pre-election panel, I projected that the Republicans were going to have a strong showing in the House races. This is certainly proving to be true.

As of this writing, CNN has projected that Democrats have won in 219 seats. Republicans have been projected the winners in 203 seats. There are 13 races outstanding, per CNN projections.
Of those 13, the Democratic candidates lead in a mere two of them. (One of these 13 is going to a runoff, where the Republicans are heavily favored to win.)

In other words, if every one of those 13 seats went to the party leading in them right now, Democrats would have 221 seats to the Republicans’ 214 seats in the next Congress.
Talk about a fairly close call for Democrats.

I wish all these new representatives a lot of luck. They will need it.

Didn’t the left claim the GOP was anti-women and minority?

Well, they ain’t gals and mi-nor-o-tees!

These women and minorities are on the GOP plantation, you know!

Her smile is electric and inspiring.

The opposite of that sicko Whitmer’s.

I wonder how many of the Senate and House races they flipped. Would it not be interesting to discover that they cheated on the down races too.

I do not expect the prez results to be overturned regardless of “the margin of fraud”: How would you do it? That’s why the “journalists” can keep crying “where’s the evidence?!?” because once that ballot is outside of its envelope, well, who knows?

BUT: I find it rather interesting that “down ballot” GOP *CRUSHED* the dems, but somehow Trump didn’t get enough votes?

That’s not that interesting. A lot of people split their votes, and vote for a presidential candidate from one party and congressional candidates from another. Or don’t bother voting in the congressional races. Or vice versa.

Also, Biden winning a state while Reps do well in house races in that state just means his support was concentrated in the cities, so he could easily win the state while losing in most districts.

If there’s evidence of fraud, that’s not it.

notamemberofanyorganizedpolicital in reply to MarkSmith. | November 16, 2020 at 2:09 pm

DEMS CHEAT IN ALL THEIR RACES.

Weasel Zippers: Philly Mob Boss May Be Involved In Stealing Election For Biden…

Don’t Join Biden Administration, Our Majority Is Now At Risk…

“We’ve identified,” she added, “at least 450,000 ballots in the key states that miraculously only have a mark for Joe Biden on them and no other candidate.”

So hundreds of thousands of Democrats and ONLY Democrats cast ballots to vote exclusively for SloJoe. Nothing else on the ballot was worth their consideration. Smell test please?

randian in reply to notamemberofanyorganizedpolicital. | November 16, 2020 at 10:01 pm

It doesn’t pass the smell test, but judges in election fraud cases almost always have severe cases of anosmia.

Milhouse in reply to notamemberofanyorganizedpolicital. | November 16, 2020 at 11:59 pm

A lot of people vote only in the presidential election and don’t bother with the rest of the ballot. Biden got a lot of these, but so did Trump. And a lot of people did vote on the congressional races, but for the Republicans.

We are going to crush the Democrats in 2022.

No they won’t Gersh. Democrats have made your vote irrelevant.

Anyone from horribly gerrymandered, deep indigo Maryland here? Anything we can do to flip this region?

Not until large segments of the FedGov are eliminated or relocated. We’ll occasionally get a squish like Hogan into state office but that’s basically useless.