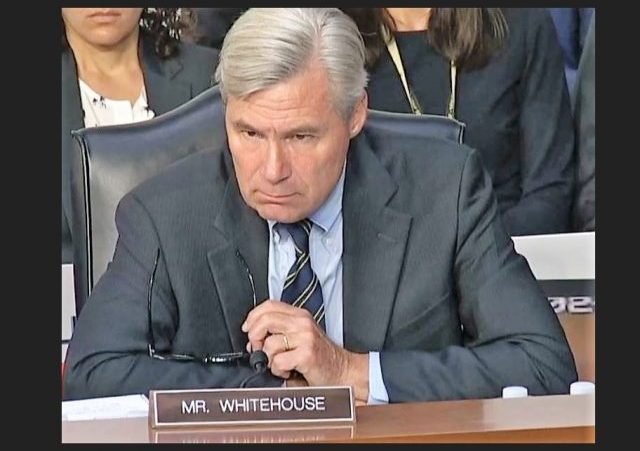 Sheldon Whitehouse may have had the worst performance on Day 2 of the Brett Kavanaugh hearings. And that’s saying a lot.

In a forum filled with Democrat attempts to play gotcha with Kavanaugh, Whitehouse displayed the disdain and contempt for his political opponents that has become his hallmark.

Whitehouse never has been a happy warrior.

He demeans and belittles people who disagree with his policy provisions. Perhaps the worst example is when he compared opponents of Obamacare to Nazis during Kristallnacht and people who lynched blacks. Dana Milbank at WaPo noted at the time:

Whitehouse brought that attitude to the questioning, working in repeated references to “dark money” supporting Kavanaugh, and trying to make the Federalist Society into some sort of nefarious operation undermining the country. That’s how Whitehouse rolls, his opponents are portrayed as devious and conspiratorial. And like former Congressman Alan Grayson, Whitehouse suggest that his opponents want people to die (though he’s not as blunt as Grayson).

Here is Whitehouse trying to get away with a question phrased in a misleading manner so as to suggest that Kavanaugh has a policy position against health care preexisting conditions coverage. In fact, Kavanaugh was simply sticking to the Ginsburg Rule of not commenting on a matter that might come before the court. But Whitehouse wanted his sound bite so he would claim Kavanaugh wants people to die.

Whitehouse repeatedly cuts off and prevents Kavanaugh from giving a full answer. But Kavanaugh ended up winning the exchange because Whitehouse didn’t get the sound bit he was hoping for.

It was no mistake that Whitehouse brought up preexisting conditions coverage. It’s a talking point of the anti-Kavanaugh opposition.

As a Trump-backed lawsuit to gut the ACA moves forward today, Kavanaugh refuses to tell @SenWhitehouse he will uphold protections for people with pre-existing conditions. #StopKavanaugh #WhatsAtStake pic.twitter.com/fHNdFipKuE

Under pressure from @SenWhitehouse, Kavanaugh refused to promise to uphold protections for people with pre-existing conditions. pic.twitter.com/tvzCLGXqcx

Whitehouse rolled out lists of donors to the Federalist Society, as if he had just unveiled some anti-American conspiracy.

.@SenWhitehouse blasts the role of the Federalist Society in White House judicial selection during the Bush era and Trump era. Highlights right wing donors and how those donors connect to #DarkMoney money backing his current bid for the Supreme Court. pic.twitter.com/rhMi2MofGa

And he focused a lot of his questioning on the role of the Federalist Society.

The attacks on the Federalist Society are pretty pathetic as Cortney O’Brien points out at Townhall:

During the second day of Supreme Court nominee Brett Kavanaugh’s confirmation hearings Wednesday, Democratic Sen. Sheldon Whitehouse (RI) shamed the Federalist Society. The group, Whitehouse explained, is “a significant group of people who tend to share very conservative and pro-corporate point of view.” He then had an aide provide a poster showing a large list of the group’s “right-wing funders.” …

Whitehouse was trying to have a “gotcha” moment, but he failed to foresee a few issues. For instance, he did not note that liberal Justice Elena Kagan once praised The Federalist Society when she was Harvard Law’s dean.

Actually, all of the current Supreme Court justices have spoken at Federalist Society events at some point….

The story gets more interesting, though. It turns out Whitehouse has spoken at an event hosted by the Federalist Society too.

Perhaps we should have a Sheldon Whitehouse drinking game. Every time he says “Dark Money” we drink.

Watch Sen. Whitehouse pull out the receipts on just how much dark money is supporting Brett Kavanaugh pic.twitter.com/3LFKAfeYlN

The problems is, not many people could handle that amount of alcohol.

You can view the entirety of Whitehouse’s question at this link.

Sheldon is a doofus!

He sure is a “doofus” ! Look at this list of “nefarious” “shadowy” organizations! The US Chamber of Commerce, the Koch foundation, the Liberty Fund! Horror! Why these people are the most secretive and shadowy of all the shadow organizations aren’t they!

The US chamber of commerce is a shadow organization that funnels “dark money”? What a tool. My other favorite – the dark money Liberty fund, that is so dark and shadowy that it has a public website where it states its nefarious goal by saying: “The Liberty Fund was founded in 1960 by Pierre F. Goodrich, an Indianapolis lawyer and businessman, to the end that some hopeful contribution may be made to the preservation, restoration, and development of individual liberty through investigation, research, and educational activity.” Now if that isn’t an evil, nefarious, dark-money organization right there I don’t know what is.

Oh fer chrissakes RI – please vote this jackass out of office in November.

There is some who feel that the defeat of Weldon $hithouse this November may be one of the surprises of the Midterm Elections. Let’s pray that the folks in Rhode Island have had enough of this less that useless Professional Politician seat warmer who along with the rest of the demoncRAT Caucus hasn’t done ANYTHING to help President Trump carry out his campaign promises to help Americans and secure our borders.

I’ve never been to Rhode Island. Is it populated by complete idiots?

Not all 1,061,712 people, but the vast majority are. I think it comes from slightly over 1 million people being crammed into the smallest state in the nation. Not to mention the potential for an inferiority complex from living in the smallest state.

A memorable moment from elementary school was doing a third grade report on one of the 50 states. I picked Rhode Island because it was the smallest state. Funny, the things one remembers…

Did real people vote for this clown?

i can, no problemo…

except Resident 3vil wants me to make dinner, not get faced.

Whitehouse is obviously a bad drunk, who ascribes motive to patterns of outcomes he doesn’t like.

To him, the fact that Obama had the worst Supreme Court record of any modern president was a sign of corrupt adjudication, not corrupt and unconstitutional actions by the incompetent and dangerous Obama Administration.

Perhaps we can vote on best costume?

Some people just seem to beg to be smacked hard in the mouth, Whitehouse is a perfect example of one such arrogant morons who seems to beg for it and would deserve it.

How did he get elected? What is wrong with the people of RI to listen to this turd on the campaign trail and say “yeah, this is the turkey we think should be a member of Congress”?

I guess you don’t remember the likes so Sen. Claiborne Pell or Rep. Rernand St. Germain. How about Patrick Kennedy?

They say there’s a sucker born every minute. Rhode Island has more minutes in its day than any other state.

That should be “Fernand St. Germain.”

There are far too many morons who have been elected, both sides have pushed through some real “winners”, but the left seems to be pushing through some true doozies. Mad Max, Pelosi, Schumer,may top the list, but dear Lord they have stacked the deck with them.

Oldgoat, you ask “How did he get elected?” I’m convinced it’s voter fraud. RI, with just over one million people, has about 200,000 too many on the voter roles. That is significant.

The excuse given is that even though people on our voter lists have died, moved, or aren’t here to vote anymore, doesn’t mean they are voting here, and we just need to remove these people from the lists as we come across them. Seriously. It’s what many here call ‘good government’.

Anyone can vote in RI, multiple times too. You just go to the Civic Center in Providence and sign a ballot saying you want to vote. Thousands of illegals do it and it is likely many Democrat party slugs do it multiple times. Democrats collect absentee ballots, as they have done for years, and fill them out for the elderly. They put on dinners in senior living facilities to secure those ballots. Criminal enterprise.

Every election cycle, that drug addicted sot, Patrick Kennedy, would go to the old folks homes and tell them they were going to be tossed into the streets if they voted ‘R’ because the ‘Rs’ were going to take away their SS checks. He too was a doofus.

I agree that they probably have a large fraud voting record there. I am convinced that Hillary thought she had the election won because of the massive fraud machine that Obama put in place.

Of course this is why the left hate voter ID, it would probably cut their votes significantly.

How does this guy NOT have a Bad Lip Reading video yet?

I sat through the whole 30 minutes. What a sanctimonious little twerp. He tried so hard to trap Judge Kavanaugh. Don’t mess with the big brains, you pathetic excuse for a man.

He was a McCain pallbearer.

Didn’t see the day 2 testimony, but it’s no surprise Whitehouse was the worst. He was the worst on day 1 as well, with his conspiratorial list of the “Roberts 5” and long list of 5/4 decisions swung by this conspiracy!

Whitehouse is the Keith Olberman of Supreme Court justice hearings. Just as sanctimonious, just as condescending, just as totally misleading. And I bet it pisses him off that he will never be in the real White House. And he loves to hear himself speak.

I loved it when Feinstein had to point out to senile Leahy that the email he was reading aloud like a big gotcha was to, from and about someone else. Kavanaugh’s name was not mentioned in it.

Just vote him in already. He is as qualified as it gets. He is not going to give them answer on how he is going to vote. These hearings are a waste of time. I predict he will get 55 yes votes.

Someone has to replace Al Franken.

“…working in repeated references to “dark money” supporting Kavanaugh, and trying to make the Federalist Society into some sort of nefarious operation undermining the country.”

My annual donation to the Federalist Society just doubled.

democrat party GOTV. They have to whip their SJW useless idiots in to a frenzy to get them to the polls. it will get much much worse.

This guy is the prototype politician. He measures his worth by the number of words that come out of his face.

I would have voted for Maizie Hirono as the worst but will defer to the good professor’s judgement. Both are lunatics. And “Maizie” was a very close second.

By all accounts, Whitehouse is one of the dumbest Senators in the world’s “foremost deliberative body.” Most of these doofuses couldn’t argue their way out of a brown paper sack.