I’m sure Steve Scully is breathing a sigh of relief. 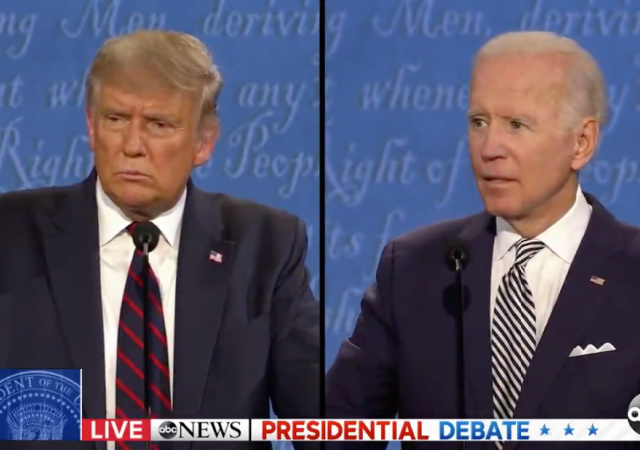 What a cluster. Though I’m sure debate moderator Steve Scully is breathing a sigh of relief.

The Commission on Presidential Debates announced that the October 15 presidential debate is officially cancelled.

BREAKING – Commission on Presidential Debates has cancelled the Oct. 15 debate. Not sure this could have been handled any more poorly on several levels.

Trump refused to participate in debate after they announced it would be moved from an in-person debate to a virtual debate. Then, former Biden intern and avowed Never-Trumper Steve Scully (who was tapped to moderate the October 15 debate) accidentally tweeted (though it was meant to be a private message) fellow Never-Trumper Anthony Scarmucci, asking if he should respond to Trump. Scully later claimed he was hacked (but so did Anthony Weiner), a claim which the Commission on Presidential Debates helped circulate.

The Commission on Presidential Debates is supposedly bipartisan w/ an equal number of Rs and Ds. I know all of the Republicans and most are friends of mine. I am concerned that none of them support @realDonaldTrump. A biased Debate Commission is unfair.

I guess now the commission has plenty of time to get to the bottom of the Sully hacking.

I am surprised and pleased that Bob Dole weighed in as he did. Vey few politicians have been willing so far to use that word, “unfair.”

WW2 vet. Caught a back & arm load of machinegun bullets in Italy. They were pretty surprised he was still alive then, too.

He is a real American and a true hero

I never really like Bob Dole. He and slimy CFR Newt Gingrinch are the reason why we are at this point. Bob voted more in line with the Nazis than Thomas Jefferson.

Bob Dole is so old that any under-agers he may have dallied with on Epstein’s island would all be in Alzheimers wards. So he’s free to use words like “unfair.”

Bob Dole is a good guy.

He was just a bad presidential candidate.

Nopw is the time for Trump to push Joe Rogan.

What a bummer. These debates offer the only opportunity when things can be put to evasive Biden. All his life this guy has skated, never being held to account. All the while being able to berate nominees witnesses who appear before the Judiciary Committee.

I was looking forward to Trump giving him a little more cuffing around the ears.

The elusive Biden isn’t ever held to account for anything; the moderators and media collude to protect him by accepting answers like “I won’t answer that because it would be a headline tomorrow” and “I’ll tell you my position after I’m elected.” (Not direct quotes, but close enough.) Political journalism is dead.

In a virtual debate he would have been essentially a Disney animatronic president.

One that breaks down constantly.

To think some of you .. “yea of little faith” were doubting Trump’s strategy. The man confronts evil wherever he finds it.

Well that was a very bad news cycle for the debate commission. First they made a decision and issued a press release without informing the campaigns much less seeking input.

Then the chair of the commission goes out to defend it by stating that ‘for over 30 years the commission made all the decisions without input from the campaigns’; conveniently ignoring why that is no longer the case.

Then Steve Scully appears to have sent a public v direct tweet to the ‘Mooch’, a known opponent of Trump asking for advice.
Finally the commission, not Scully, claimed ‘hacking’.

This repetition of ‘bipartisan’ like it’s a mystical incantation that wards off evil is ludicrous. Bipartisanship is why we got Trump. Chris Matthews may be pining for the ‘old days of DC’ when r and d went drinking together after work. The problem with that was bipartisan meant a limit on how much much taxpayer money to piss away v not pissing any taxpayer money away. The d want x so the r would agree to x minus a hundred million.

No thanks I don’t want a return to the days of bipartisanship. I would prefer the political parties to vigorously oppose each other in very clear and distinctive ways. I want our government employees to be NON partisan, not simply agreeing with each other on how best to screw the citizens they work for.

Rant on!! God knows we need to in this Hell of a world.

He should do a virtual debate – one condition – Rush Limbaugh moderates

How about Joe Rogan instead? It would accomplish several things:
1. It would be entertaining as heck.
2. Trump and Rogan have a similar ‘vibe’ IMO. Rogan would likely end up damn near endorsing Trump.
3. Rogan would be fair in that he might ask tough questions but he would allow Trump to answer in his meandering style.
4. Rogan has a huge audience with valuable demographics. This would have Trump in front of folks that would ordinarily skip.
5. It would be online. Folks could watch again and again. It would become ‘a thing’ to view it.
6. Biden would never in a million years do it. Rogan would love to offer Biden the same opportunity day after day until the election. No way Biden accepts but if he did the contrast with Trump’s performance would become the story.

Finally it gives something in place of the now cancelled debate. Lots of media hype leading up to it and following.

Hearing President Trump on radio a lot today I think he would be better prepared and certainly have a few questions for Sundowner Joe. But the parameters of this virtual debate was stacked against DJT so screw them.
Sundowner Joe can crawl back into his basement and not ever come out.

Here’s an idea. Trump should hold the debate anyhow… and Biden can come or not. Let Tucker Carlson be the moderator. If Biden doesn’t attend, use video clips of any previous responses to the question.

It would be a lot of fun and a helluva a stunt, and if Joe stays in his basement he’ll look foolish.

I like it. Each of the Biden replies could be his contradictory positions.

Trump should hold a one-man debate, imagining Biden present at an empty podium. It’d be great.

and another empty podium for Chris Wallace, or for Steve Scully. Maybe one for each.

I still think anther debate, maybe two, would be helpful. The problem is the Biden campaign isn’t going to agree to a debate in which he isn’t protected somehow, from a biased moderator, using remove earpieces, telepromters, etc.

There is no reason to listen to the Commission of Presidential Debates.
They are a non-profit nothing. 501 c3
They have no real standing.