After Trump called ckully a Never Trumper, Scully sought private DM advice on whether to respond from Never Trumper The Mooch, but accidentally tweeted it 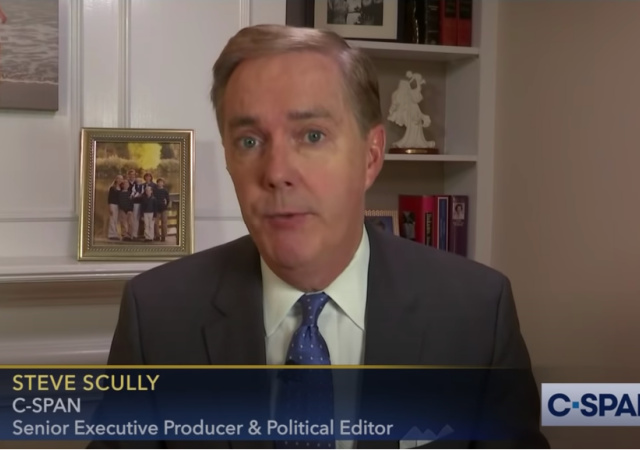 C-SPAN Political Editor and second debate moderator Steve Scully and well known Trump hater The Mooch had a bizarre Twitter exchange, which has led to raised eyebrows over Scully’s objectivity in the next debate.

Tonight on Hannity, Trump referred to Scully as a Never Trumper.

Scully then asked The Mooch as to whether Scully should respond. It looks like Scully meant to DM The Mooch. 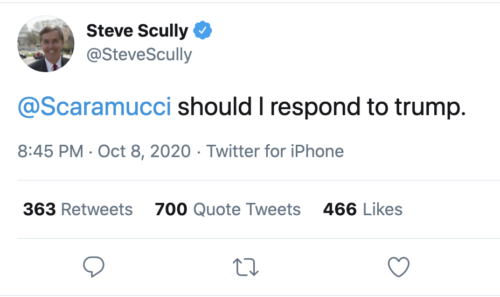 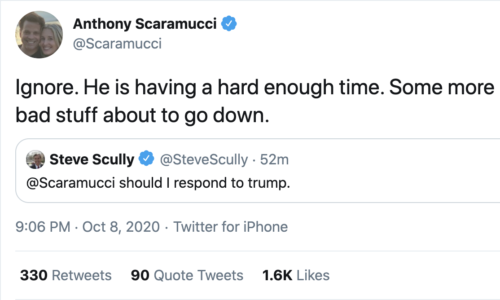 Why is a debate moderator privately messaging an opponent of one of the candidates? How many DM’s do we not know about?

We do not know for sure if the October 15 debate will happen since Trump said he will not participate if they hold it virtually. The debate commission changed it due to Trump’s COVID-19 test.

I wonder how Trump will deal with this exchange tomorrow.

I don’t know if anyone can trust The Mooch’s response. He probably said that because he knew Scully made a mistake and wanted to play along.

It's *almost* like the debates are rigged against @realDonaldTrump https://t.co/GYLV3MQyAb pic.twitter.com/nzpcyUnOw5

Think about how many anti-Trump private messages and communications involving Scully and other supposedly neutral journalists we DON'T know about https://t.co/OJ7sNo494h

Snowflake Scully plotting with that punk Scaramucci? The Commission should of course boot Scully forthwith, without adieu. But now that this rock has been lifted a bit and has exposed these two worms, further examination is indicated to find out just what else is going on in this rotten, biased Commission.

notamemberofanyorganizedpolicital in reply to Connivin Caniff. | October 9, 2020 at 10:57 am

How many trips to Epstein Island did they have?

Connivin Caniff in reply to notamemberofanyorganizedpolicital. | October 9, 2020 at 2:25 pm

Scully went as one of the girls.

The Mooch had his chance in the limelight, but failed miserably. Now he’s turning on the guy who gave him a chance.

mp is right to shun these creeps.

Why ANYONE treats that 5-head unaccomplished POS with any respect or decorum is beyond me. He’s a tool

Mary, you wrote, “It looks like Scully meant to DM The Mooch.”

I dont use Twitter and don’t know the terminology. I suspect I’m not alone.

My grandchildren keep me informed – after they politely laugh!

I know this is off topic, but after driving four hours today, I couldn’t wait to have a chance and log in and share a thought. I think I’ve got an idea why Biden won’t answer the court packing question.

It’s not that he’s afraid it will cost him millions of votes….no…that if he does acknowledge it, that decision could cost him 2 votes.

We all know, both sides are going to engage in lawsuits. Doesn’t matter how those law suits fair during the initial decision, because the loosing side will appeal. Eventually, these cases are going to SCOTUS. And if Biden tips his hand, do think certain judges are going to look kindly on a case where their vote means the victor will go on to damage the court with a political strategy that not only politicizes the Court, in their hearts they know it will also remove any sense of impartial objectivity for the future of the Court, it will also render them neutered as the conservative wing.

Biden’s not afraid his answer will rile the American voter – he’s not wanting to send a clear signal to the Court that he intends to do just that.

The overall net result is good for Trump, which is why his campaign keeps putting the question to Joe and the ‘Ho.

any person chosen at random could chair the debates better than has been done thus far.

it isn’t bias. It is partisanship.

The media is the Democrat’s Propaganda ministry, they should have to file as such.

Skilly should recuse himself.

turned on cspan’s washington journal show just now, no scully. steve why are you hiding today, afraid some caller might ask you an uncomfortable question?

Now the debate commission said his account was hacked. If so why wasn’t scully out in public making that proclamation last night. he could have called into all the news outlets, gone on his own show and made that statement.
there aren’t enough curse word available and i don’t want to get banned or a time out.

The old “I was hacked” canard….;just like that racist Toy Breed on PMSNBC….