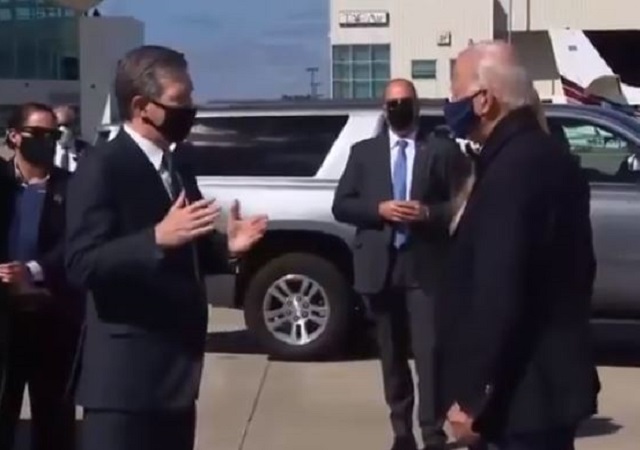 In addition to being known as the U.S. Senate nominee who conducted an extramarital affair out of the home he shares with his wife and two teenage kids, Democrat Cal Cunningham now also has the distinction of being the ball and chain who his state’s governor assured his party’s presidential nominee they would drag across the finish line.

Just two weeks out from election day, Joe Biden made a campaign stop in Durham, North Carolina, on Sunday where we learned, among other critically important things, what flavor milkshake he ordered from a local Cook Out.

Upon arrival at RDU, Biden was eagerly greeted on the tarmac by North Carolina Gov. Roy Cooper (D), where they both briefly talked about Cooper’s family once visiting Biden’s home and knowing Biden’s late son Beau at the time when both served as attorneys general for their respective states.

As they talked, Cooper was also caught on a hot mic talking about how Cunningham’s situation was “frustrating” but that they would drag him over the finish line anyway.

“I think we’re gonna all get across the line. I think Cal’s gonna get across the line, too. I know that’s frustrating. We’ll get him across,” Cooper told Biden, who looked at the governor as he spoke but didn’t respond. Cooper kept nervously looking at the cameras, which may be why the conversation appeared to be cut short.

North Carolina Gov. Roy Cooper on a hot mic talking to Joe Biden about Senate candidate Cal Cunningham, currently embroiled in a scandal over an affair he had with the wife of a veteran:

“I know that’s frustrating, but we’ll get him across.”
pic.twitter.com/AJpZHdTe2w

Pool reports from the press managed to leave this uncomfortable part of the conversation between Cooper and Biden out for some strange reason:

In addition to that, McClatchy, which owns several NC newspapers, rejected two different attempts last week by the NRSC to run ads on their newspaper websites that mentioned the affair. This happened just two weeks after the Charlotte Observer ran interference for Cunningham by editing out parts of an editorial board interview that might make him look bad.

Perhaps the “we” Cooper referred to in the video as dragging Cal Cunningham over the finish line was the North Carolina political media in addition to Democrats. It wouldn’t be the first time.

Or maybe not so much Democrats, considering Cunningham’s not exactly a popular guy in Democratic circles these days:

This weekend, Cal was removed from a fundraiser for Dem Senate candidates

Today, he's been bumped from an in-state fundraiser? #NCsen pic.twitter.com/O6AiF43f5X

Here’s the ad the NRSC wanted to run in the Charlotte Observer and the Raleigh News and Observer:

? New NRSC ad in #NCSen@CalforNC was engaged in more than one extramarital affair… and refuses to give North Carolinians the truth. He's not who he says he is. #ncpol pic.twitter.com/EpsiyQ8F5F

Sen. Thom Tillis (R) himself has not let his foot off the gas to highlight the affair scandal’s military aspect.

His latest ad features military veterans talking about the “Code of Military Justice”:

Cal Cunningham broke his oath and disgraced the U.S. Army. Veterans can’t trust him. And neither should all North Carolinians.

The embattled Senate nominee is still refusing to answer questions from the press about the affair and will not confirm or deny allegations of a second, more long-term affair made by a former staffer of his state Senate steering committee in a Facebook comment two weeks ago:

“Cunningham has not answered specific questions. On Monday, he took part in a zoom call… We were not given a chance to ask questions & the campaign has not responded to specific questions we've asked in recent days.“ #NCsen pic.twitter.com/jKM7VSmcpQ

It’s clear that Cunningham is trying to squeak through this scandal on the way to election day. Still, with the polls tightening down the homestretch, it’s unclear if this strategy will ultimately prove to be a “winning” one for the Cunningham campaign.

Sounds like straight-up voter fraud or at the very least interference.

notamemberofanyorganizedpolicital in reply to 2smartforlibs. | October 20, 2020 at 1:05 pm

Just like all the Biden family – including Hunter Biden.

GOT TO LOVE THAT BARBRA STREISAND EFFECT!!!!!!

Gee thanks Andri, now millions who have not heard of it will discover the “truth!”

Hillary Clinton Jinxes The Biden-Harris Ticket With One Tweet….

“In two weeks, we could call this birthday girl Madam ……”

Hey! If the legally dead can vote, why shouldn’t the politically dead serve?

The secret to D-Party party discipline: none of their candidates are strong enough to win without the party dragging them along.

They need to win because they are otherwise useless n doomed. They get their grift and the means to keep it by being in office.

What would Nifong do in such a situation?

“Don’t worry, Grandpa. We’ll make sure Killer is out of prison in time for your birthday party. You just make sure you live that long, okay?”

There is hardly a more pessimistic website than LI that is addicted to polls and believe them a crack addict that can’t be betrayed by the drug enough times to ever quit.
I have a serious question for LI?

Do you think in the current Media and Big Tech Giants that they aren’t going to gas-light the crap out of everyone with polling?
Here is an alternative way to look at it. If a guy who has such provable affairs can win a Senate seat from an incumbent Republican that also went for Trump in 2016 then really isn’t it all over?

The Democrats will do ANYTHING to keep from delivering ANY bad news to their voters.

And the Republicans CAN’T WAIT to try and scare the crap out of their voters and try and depress them into a panic every election season.

Democrats: Full optimism even when their candidates are in the middle of career-ending before and election

Republicans: Full pessimism even in the face of thousands coming out to rallies to show their enthusiasm.

Obviously, if you want to live a life of any emotional comfort you want to be with the Democrats.

If you want to live in constant fear since 2008 then you try and be a Republican where day after day you get to hear that it is the end of America for 12 years plus.

The only person who has been optimistic on the Republicans side is TRUMP!!!

I don’t know where the party does anything but wallow in pity after he is gone because that is the only thing LI and the Right know how to do.

A life of emotional comfort? Way too close to feelz for me. Don’t need it, don’t want it.