National Guard Deployed to Philadelphia After Violence, Looting Explodes for the Second Night

National Guard Deployed to Philadelphia After Violence, Looting Explodes for the Second Night 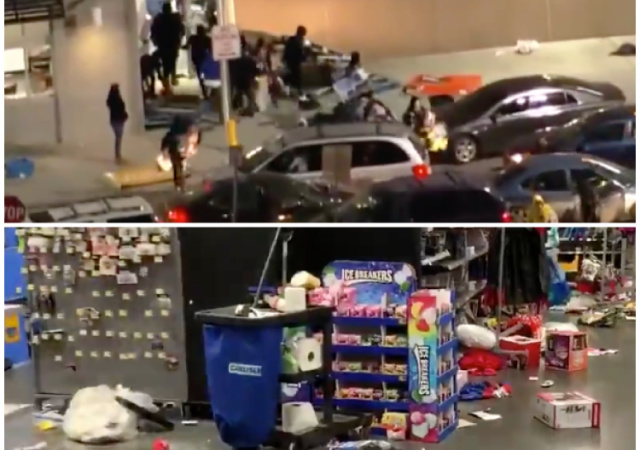 Pennsylvania Gov. Tom Wolf, a Democrat, activated the Pennsylvania National Guard to Philadelphia after violence erupted for the second night in a row.

The move by Gov. Tom Wolf, a Democrat, to activate the guard is a stark difference from other Democratic governors who have been hesitant or slow to mobilize troops in response to unfolding unrest.

The Philadelphia Police Department will also beef up its presence across the city in anticipation of possible unrest over the death of Walter Wallace Jr., 27, city leaders said.

“For today and this evening, we anticipate the chance of additional incidents of civil unrest and, as such, we will be taking additional steps to ensure order,” Philadelphia Police Commissioner Danielle Outlaw said during a news conference along with Mayor Jim Kenney and city leaders.

All you need to do is watch these videos. Somehow looting and destroying private property helps bring racial equality.

A Chick-fil-A in Philadelphia was broken into and damaged. pic.twitter.com/yfR4w5laOj

Philadelphia will deploy additional police officers and has asked surrounding regions for law enforcement support as it braces for further unrest sparked by the police shooting of a Black man, Walter Wallace Jr., who they say was armed with a knife https://t.co/jbp2eJKz8r pic.twitter.com/TZ9n4S6nLg

WALMART LOOTED: Looters run in and out of a Walmart with TVs and other electronics in Philadelphia's Port Richmond neighborhood as the city experiences another night of unrest after the shooting of Walter Wallace Jr.

Many cars rush in and out of the parking lot of a Walmart being looted at a BLM riot in Philadelphia tonight. https://t.co/TSNtcCKweQ

The outside of the damaged businesses were trashed from the items left behind by the looters. pic.twitter.com/jZwTvUI0Mv

The BLM crowd marched as close as they could to the Philadelphia Police 18th District. Police in riot gear stopped them from getting closer. pic.twitter.com/Rlw5QX0ZEk

Looters in Philadelphia are pulling up in cars and rushing into stores to grab as much as they can before driving away. pic.twitter.com/I7MCwLnnAg

Philadelphia rioters and looters destroying the inside of a Dollar Tree. pic.twitter.com/J4Gj2yz75R

Mass looting across the river and @ElijahSchaffer just got beaten up for filming. This is inside the Five Below store. Police are in the same parking lot near the Walmart, but there seem to be too many looters pic.twitter.com/CZeIiMokJa

BREAKING: BLM looters jumped our reporter @ElijahSchaffer while he was covering the riots in Philadelphia

He’s continuing to report but may need stitches for a deep gash in his upper lip pic.twitter.com/P7ZZup5vUT

BREAKING: a Wal-Mart is currently being looted for the second time tonight

Multiple people have been shot/assaulted including myself

(hence the gashed lip making it difficult to speak)
pic.twitter.com/6UXol5GHYr

BREAKING: Wal-Mart is being looted for a 2nd time by BLM rioters in Philadelphia

They are looting 15+ stores over a 4 block radius. Police have not been able to get the situation under control

Chaos is ensuing to the point where it’s not safe anymorepic.twitter.com/U34olfZ835

Happening NOW Large contingent of ⁦@PAStatePolice⁩ mounted patrol horses&trailers across from Philadelphia City Hall. 15th Street closed. so is Arch Street leading up to this. ⁦@PhillyPolice⁩ getting help it requested for expected protests etc ⁦@FOX29philly⁩ pic.twitter.com/Rqzmhp4kit

A Chick-fil-A in Philadelphia was broken into and damaged

I’m sure UPenn and Comcast put the pressure on Wolf to do this. Thanks, Amy and Brian!

This is liberal leadership in action.

Hey, I give this guy props for being the first Democrat governor (as far as I know) to have enough brains to call out the NG. The rest just let stuff burn.

Don’t get too excited. The moron called out the National Guard yet proclaimed the riots, looting, assault, and arson “peaceful protests.” https://www.abc27.com/news/top-stories/some-pennsylvanians-concerned-by-governors-response-to-30-officers-injuries-as-well-as-riots-and-looting/ Sickening.

I’m waiting for “sympathy riots” to break out around the country right through the weekend. Not sure the DNC-MSM-tech oligarchs can stop it.

Back in the 80s as I recall; the Philadelphia police dept. did not need the National Guard to clear out violent radical groups.

Wal-Mart, presumably, has cameras in the parking lot.
License plates on record.
Whatcha gonna do about it, Gov?

When I was watching video of looters, them getting into their cars to leave, I thought that someone needed to plant a RPG into each vehicle.

“The move by Gov. Tom Wolf, a Democrat, to activate the guard is a stark difference from other Democratic governors who have been hesitant or slow to mobilize troops in response to unfolding unrest.“

Riiiiiiiight. Let’s see what the troops actually do once they are deployed. Consider the words of Lt. Col. Hickox:

“… protecting life, property and the right to peacefully assemble and protest…”

In comedy this is know as a “triple”. The first two statements (protecting life, protecting property) are the bland setup to the zany punchline (peacefully assemble and protest). If the past is any guide, the National Guard will be given orders to stand down (except for a carefully scripted show of force for the TV cameras to create the illusion of peace) and not interfere when the burning, looting, raping and murdering resumes.

Exactly. There’s a threshold on this kind of activity. For random looting and occasional arson, the National Guard are just visual props. Why? They can’t arrest anybody, and they’re going to get into deep crap if they shoot anybody, so all they can do is stand around and look police-y.

Which brings us to the nut of the problem: The police cannot police here. Anybody they arrest will just get released, if anybody uses force against them during an arrest, they are not permitted to respond in kind or they’ll be the ones in jail, and every cop knows it.

It’s a problem of perception. The violent criminals know they are going to get away with their acts, so they feel free to commit them. The police know they are not permitted to stop the criminals, so they don’t. The store owners know if they shoot any looters, the DA will spare no expense in putting them away for life *and* the looters will happily turn around and burn their business to the ground while it is unprotected *and* the lawyers will pick over the bones of their life’s work while they’re in jail.

The solution is to let police, police. All those cars coming into the Wal-Mart parking lot? Evidence in an investigation of first degree burglary. Track the license plates back to their homes and tow them to the police impound yards where police forensics teams can go over them, sometime in the next few weeks. Anybody picked up on the street with video showing them in the vicinity of the looting? Witnesses. They’re going to need to be interviewed, held for three days or so during the investigation, before making bond. Suddenly, being around looting becomes a giant hassle instead of a way to get a hundred bucks of stuff you probably didn’t need in the first place. When that happens, the looting will magically stop.

So, If I’m reading you correctly, the problem is the DAs, The other problem is the no-bail, get-out-of-jail card.
solution: 1 rail, 1 barrel of hot tar, one large bag of feathers

While you are essentially correct, in your assessment, there is one slight mistake.

The National Guard, when activated by the Governor of his state, is not a military unit. It is an organ of the state and is a law enforcement arm of the Governor’s Office. Under these conditions, members of the Guard can legally arrest or detain people, for criminal violations. Whether the Guard exercises those powers or not depends upon the ROE issued by the Governor.

I prefer the old reliable “looters will be shot on sight”. And since these “peaceful protests” lead to night after night of looting and pillaging, how about BANNING THEM!!!!

Can’t be having bad press like these riots this close to the elections! All about trying to preserve the vote for their side.

Well, that’s educational. I’d been wondering if looting or arson are the way to advance Social Justice, but since I don’t see any arson, it must be the looting which will do the job. Good, glad to clear that up.

Of course, looting a Dollar Tree implies that maybe we’re not talking about terribly large quantities of Social Justice here; just a little tweaking around the edges.

Can the rioters and looters still vote for Biden if they are in jail with no bail?

Now stores will be loathe to reestablish in these neighborhoods, and the left will whine about “food deserts,” now to become “store deserts.”

You reap what you sow. Thanks a lot, Democrat Socialists.

Mail in ballots will be delivered to any and all jailed “peaceful protesters” regardless of citizenship and past felony convictions. After all, they have demonstrated their good character and their love of this country by their sacrifices!

When will racists quit trying to arrest people who don’t want to be arrested?

In Oklahoma with the riots months ago the guard was mobilized and two guardsmen were assigned to each police officer. Some but not a lot of property damage occurred. Arrests were made.

A few days later a protest in a local small town was met with numerous country guys Open carrying ar-15s who lined up in front of the glass windows. No one got hurt, no windows broken, no stores looted. Protesters had the opportunity to have their say.

I guess these responses by officials and private citizens kinda took the fun out of the riots (protests?). There hasn’t been much in the way of riots/protests since.