The Democrats decided to put on a show and boycott the vote.

They unanimously voted to recommend Judge Amy Coney Barrett. She advances to the Senate floor.

The Democrats boycotted the vote. The placed cardboard cutouts of people who would be “hurt” if she votes to appeal Obamacare. 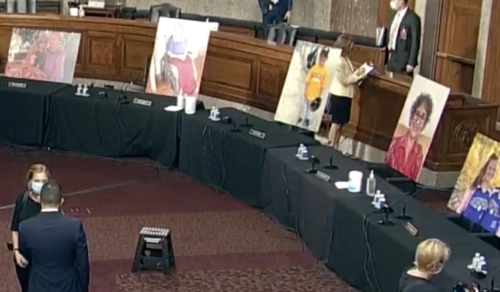 This means he will likely “tee up Barrett’s nomination” on Friday. The chamber will hold a procedural vote on Sunday.

The senators then have 30 hours to debate Barrett’s nomination.

Republicans have 53 seats, which means Barrett can lose three Republican seats and still win with Vice President Mike Pence to break the tie.

Sen. Susan Collins (R-ME) is the only Republican senator who has said she will not vote for Barrett.

If Trump had nominated Ginsburg’s daughter, The Dems would boycott the vote

Trump could have nominated Laurence Tribe, and the Dems would have objected.

I am thrilled for America. With love from a retired Canadian lawyer.

Proceedings should be short and to the point for once.

Those cardboard cutouts are smarter and more rational than their owners.

No. Not America, just its left side.

These juvenile antics are such a winner! Whenever I see a young child throwing a temper tantrum I am always so impressed!

I hope she’s not fooling any of us, including Trump.

I wonder if Dem silence is a way for Dems to hide their elation.

You mean a Robertsette? I wonder the same thing.

Thank you, TFG. I am glad to know I am not alone in being suspicious.

I don’t care as much about pro-life, as much as I do about this election and how she will decide.

I do not think it is so wrong that I do not trust SCOTUS nominees at this point.

That would mean she fooled both Trump and the Heritage foundation. That’s tough to do.

Democrats didn’t seem too elated when they tried to use her adoption against her.

The whole adoption thing would have been a perfect moment to revisit the two Oregon whack jobs that drove over the cliff. “So it is OK for unstable lesbians to adopt black children but not stable heterosexuals? Let them attack themselves internally for a bit. The weakness of a party built up by numerous factions is that they can be played off against each other for rank order. Just ask a person from the end of the alphabet list why they are there and not first in the order, make popcorn, enjoy.

It also makes it sound a bit like someone wants to join Madonna and Angelina Jolie in their trendy empyrian multiracial realm of purebred designer adoptees scooped up from third world shitholes. Not a strong recommendation in my book. Not a disqualifier but it raises alarms. More alarms than were raised by Roberts, Souter or Stevens, in fact, and we all know how well they didn’t turn out.

I understand. I will be happy if my suspicion turns out to be wrong!

She is definitely pro-life. (info from a source that knows her personally)

May not be able to overturn Roe/Casey, but definitely will be able to chip away at it.

There’s a helluva lot more to America than that. And some of it’s important.

After John Paul Stevens (appointed by Ford), Anthony Kennedy (Reagan), David Souter (Bush 41), John Roberts (Bush 43), Harriett Miers (Bush 43), there is a reason to be skeptical, Republicans tend to “compromise” by nominating squishy conservative judges, while Democrats nominate hard line liberal judges. I think Trump might have been that way in the beginning, but deep down he is an ornery sumbitch, and all of the underhanded attacks by the Democrats have pushed him away from being squishy and nominating squishy.

Miers was more of a “reward a loyal employee” nomination than anything. It took less than a week before Senate Republicans started making it clear to GWB that she had no chance. If I recall, the people who led the charge to get that nomination withdrawn were Sam Brownback (KS) and Jeff Sessions. She did that poorly in the courtesy meetings, and it was also said her mock hearings were not going well either. It truly was a situation in which Republicans stepped in to save her from certain public humiliation (and by extension, saved GWB). To her credit, she did withdraw after a week or so.

When Alito was nominated after she withdrew, the general consensus was, “Why didn’t you nominate him in the first place!?!?!”

p, I get that. My point was that she was another example of a squishy nomination.

It always seemed pretty obvious that it was a feint, part of the political dancing GWB had to do with Democrats who hated him almost as much as they hate DJT. Of course as a White House lawyer with no judicial experience she was no more qualified to be an Associate Justice than, say, Elena Kagan.

Well, I heard just last week that Barrett had a “very unusual background” for a Supreme Court Justice, “why, she’s never even been before a judge!”

I thought that was more than a little strange, given that she went to the short list of schools and clerked at two appellate levels before becoming a professor. Of course, Harriet Miers had the big ticket litigation experience, which is as rare as hen’s teeth in the judiciary.

Harriet Miers was fully qualified for the position, but -awp!- she wasn’t a member of the CLUB!!! She might have been a refreshing addition to the Court.

I disagree. Ford, Reagan, Bush and Bush were all politicians. Trump is not a politician. If anything, he is a tactician.

4 years of stomping hiss fits. This is getting old and someone need to get a spanking and sent to their rooms.

Was in a financial aid meeting for my kids about college. It is one great big money scam to over pay college professors and administrators. I have to carry my kid until they are 24. I was out of the house at 18! No wonder kids now adays are messed up. No responsibility.

They made a big deal about Trump U, yet the college system is one big financial scam of public funds.

Stop government-backed student loans. Tuition will drop like a stone, and Styrofoam majors will disappear.

You are absolutely correct. If the government were to reduce the amounts of subsidized loans and refrain from any notion of loan forgiveness after graduation, tuition drops like a rock, not just at the undergraduate level but especially at the professional school levels: medicine, dental and law.

Expose the schools for all the extra money they make by recruiting foreign students who pay an outrageous rate and the collusion with foreign governments and research money.

Another area that might benefit from a Special Prosecutor investigation. It is possible that our universities are in the FARA territory just based on the amount of money they receive from foreign sources.

Fix much of the healthcare system the same way. Stop government-backed medical insurance. Tax hospitals and other medical services like any other business. Make unpaid emergency room care (and other “cost of ethics” expenses) fully tax deductible.

Despite everything, most of the colleges still provide an education of sorts, if the student wants one. The fact that you’re helping your kids go there shows that you believe that.

“Trump U” was a pure rip-off. It explicitly promised things that it had no intention of delivering. It was not a university in any sense of that word, and Trump had no involvement beyond making advertisements for it, letting it use his name, and receiving a cut of the proceeds.

People paid an exhorbitant amount for a 3-day seminar, on the promise that they would learn Trump’s own investment secrets, taught by instructors he’d trained himself. They were also told there was a possibility that they could meet Trump himself. None of that was true.

Doesn’t surprise me in the least that none of the democrats listed above have the integrity to show up and vote against the Barrett nomination. They’d rather have a temper tantrum and play political games than actually do their jobs they were elected to do. Disgusting. They should all be impeached and removed from office for this disgusting stunt.

I don’t think that being 12 years old is an impeachable offense.

It should disqualify them, though, from an office where the minimum age is 30.

I propose an amendment that requires any person seeking an office with a constitutionally defined age to demonstrate a level of emotional maturity commensurate with same, in order to be eligible.

Only trouble is, Congress would get to enact laws determining how to measure and enforce the amendment…

Not so. The House can impeach and remove “all civil officers of the United States.” However the Constitution doesn’t explicitly define “civil officers”. The House impeached Senator Blount in 1797. After a few days of banter, the Senate protected itself from what it doubtless considered looming threats from the House by declaring that Senators are not “civil officers” and dismissed the case against Blount, who had in the meantime been expelled by the Senate under its Constitutional authority to do so by vote of 2/3 of its membership. It’s not at all obvious that this self-serving Senatorial sleight-of-hand is beyond challenge, although the House has never tried to do so. Perhaps it would have done so then, had not the problem of removing the odious Blount already been resolved.

Members of congress aren’t civil officers of the united states. The only method the constitution gives for removing a member of congress is expulsion by 2/3 of that member’s house.

I don’t think you can impeach an elected representative/senator. If I am thinking wrong, please provide the Constitutional provision for that. thanks.

Vote their butts out? Absolutely.

She should have been in front of the full Senate long before now.

Rumor has it that she’ll come up for a vote on Monday.

Just as blank as their ideas.

Of course now the headline reads “unanimously” instead of “on a party line vote.” The Dems really are brilliant.

Brillianter. There was no quorum, but that didn’t matter because there was also nobody to make a quorum call! They should have had one Democrat turn up to do that and prevent the vote. Not that it would have stopped the nomination, but it would have given them a talking point.

But if that happened, wouldn’t that have given them a quorum?

Government works so much better without Democrats.

Thank Harry Reid for the committee’s ability to simply change the rules. When the former speaker used the nuclear option, he set the stage for any rule to be overrun when it’s in the interest of the ranking party. Thanks, Harry!

Um, no. That’s not what happened at all.

Reid has returned to the job he is qualified for: lube boy at a Las Vegas cathouse.

Someone should have swapped Durbin’s cardboard cutout for one of Toobin.

Collins is a no, but my Murkowski is probably out there threatenening to be a no vote as well.
She always takes hostages when she has a chance.
And, she does kill them sometimes.
It is all the power she has.

Obamacare is a straw clown on one hand, a guarantor of progressive prices on the other. The issue is not insurance, or shared/shifted responsibility, but rather affordable and available health care.

It isn’t those at all.
It’s about money and power.
You gotta keep your eye on the ball.

It pretty much leaves doctors powerless. They’re becoming slaves to the “healthcare system” instead of practitioners of medicine.

Actually, the Dems put up a sideshow.