After Ratings Tank, NBA to Stop Pushing BLM Message on the Court Next Season

After Ratings Tank, NBA to Stop Pushing BLM Message on the Court Next Season

“And I understand those people who are saying ‘I’m on your side, but I want to watch a basketball game.'” 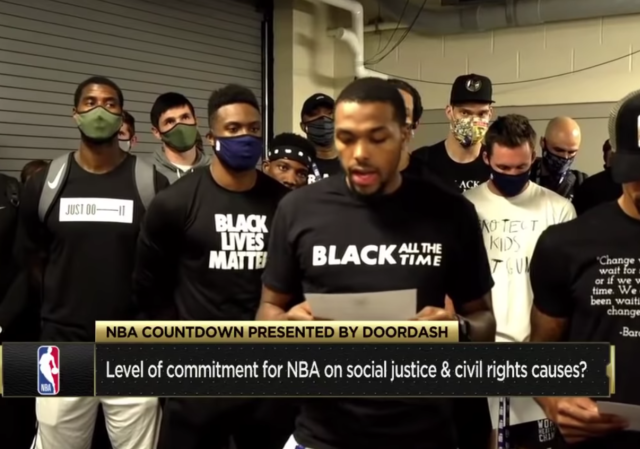 The NBA has become insufferable. As if killing the game weren’t bad enough, they also sacrificed everything enjoyable about sports in favor of social justice messaging. And it backfired, giving the league record low ratings and 68% drop in viewership for the NBA finals.

The Black Lives Matter messaging painted all over the court will be “largely left off the floor” as commissioner Adam Silver said the league is going back to “normal” next season.

NBA Commissioner Adam Silver made an appearance on NBA Countdown earlier this week to talk about the social justice messages that the league has on their basketball courts, as well as on players’ jerseys.

Silver says these messages will be “largely left off the floor” next season.

“We’re completely committed to standing for social justice and racial equality and that’s been the case going back decades,” Silver said in the interview. “It’s part of the DNA of this league. How it gets manifested is something we’re gonna have to sit down with the players and discuss for next season.

Silver continued: “I would say, in terms of the messages you see on the court and our jerseys, this was an extraordinary moment in time when we began these discussions with the players and what we all lived through this summer. My sense is there’ll be somewhat a return to normalcy, that those messages will largely be left to be delivered off the floor.

“And I understand those people who are saying ‘I’m on your side, but I want to watch a basketball game.’”

Who is the NBA? Why do we care?

notamemberofanyorganizedpolicital in reply to MarkSmith. | October 8, 2020 at 1:36 pm

“NBA to Stop Pushing BLM Message” NBA is too late, since I dumped cable TV, I no longer have to hear even one peep of their BS. BLM has severely injured NBA, it may be fatal.

My question is, do they understand people who say, “I’m not on your side, and I also don’t want to watch your basketball game?”

I’ve never watched professional sports. I don’t get the attraction and never will. I hope that catches on. Most of the athletes are dullards who wouldn’t amount to anything outside of the sport arena. Yes I know there are exceptions, but the exceptions don’t make the rule.

The SJW stuff has changed me from “don’t care” to “don’t like.”

Same here. I’ve never cared about sports and wouldn’t care if ALL professional sports just died out altogether. Luckily, I’m married to someone who feels the same way, so there’s no conflict over it.

Sports are to play, not to watch other people play.
I also don’t watch food shows, same reason.

I am so gone from all major league sports. They have lost me for good. I am now focusing on marathons and ultramarathons for my sports entertainment. So far, the shoe companies haven’t corrupted this sport but they are surely working on it.

We don’t watch anymore after the pro sports went into the SJW mantra. The generations that would normally follow and produce income for these teams are dead or dying. Why would you do that in any sane world? I literally threw out my Lakers shirts a few years back.

A few years ago, when the NFL was suffering from the Kneeling Epidemic, the ratings dropped for a season and came back up the following year after the shenanigans stopped. The NBA may be hoping for a similar experience if they tone it down a bit next season.

My question for NFL and NBA fans is: do you like being played for suckers? Because as soon as the two leagues feel financially safe the Wokestapo will be back.

Semi literate jocks, they have been pampered and scholarshiped through life, now promoting racist falsehoods and want to be respected!?! Not in this lifetime.

Jocks, ad blacks in general feel they deserve respect, and often feel they have a right to assault or even kill when it is not forthcoming. Don’t forget their rights to riot and loot.

It is past time to reset their expectations. Snipers at riots would be a good way to fix this.

This is a monumental teaching moment. This what happens when you incorrectly identify your customer base as being limited to 12% of the population and tell the other 80% they are evil colonial oppressors. The “evil colonial oppressors” change the channel or stop buying season tickets. They’ll watch soccer or curling instead.

And, the “talent” in the sport is also largely responsible. These cretins seemingly have no idea about the business that they are in. Professional sports are entertainment. And that means that you have to keep the fan base happy. While some comedians and Parisienne waiters can make a living insulting their audience, most performers can not. have never understood the attraction of the best two-minute sport in the world.

It’s just a change in marketing strategy. BLM didn’t work. Time to try something else.

Hopefully the market has a memory… but I doubt that. The irony is that both the NBA and NFL functioned on merit,skill and performance and, if modified to their political demands, would cease to exist.

You can hear by the way he hurried when talking about this, that he’s nervous whether he can get the players to stop the SJW messages on the court.

Don’t worry Mr. Silver, it won’t make a difference to me.

Is it Slow Joe who would tell them all to get out of that business and learn to code?

I have wondered for some time if dumb people are more likely to be a jock, or do they become dumb one blow to the head at a time.

I have also observed that the vast majority of jocks, regardless of skin tone, have the same issues as Affirmative degrees.

No you don’t, at least many of the players don’t. You hate many of your (probably former) fans. But it wasn’t so obvious until now, when so many players and coaches have spoken out. We heard you loud and clear.

The NBA finally achieved equality. Their ratings are now the same as the WNBAs!

Further to Mac45s comment about how the NBA decided its entire audience, not just its core audience, was limited to 12% of the population.

I haven’t been to an NBA game in person for well over a decade, maybe a bit more. A Warriors game in Oakland. It was obvious they didn’t want me there. All the entertainment was hip hop turned up to 11. It isn’t like I expected a remix of the Country Music Awards but it was ridiculous. Basically, the NBA was telling me, “Basketball. It’s a black thing. You wouldn’t understand.”

The only reason I went was a I was visiting family on leave and a friend had an extra ticket. Since then I wouldn’t even go to an NBA game if the league gave me a free ticket and paid for my beer.

“And I understand those people who are saying ‘I’m on your side, but I want to watch a basketball game.’”

The arrogance of these bastards! Yeah, we’re all on their side. NOT! Their side is a pack of lies. There is no such thing as “systemic racism,” “white privilege,” “mass incarceration,” and there certainly is no “epidemic” of racist cops gunning down blacks simply because they’re black.

Speaking of “mass incarceration,” when I say there is no such thing I meant in the U.S. But the Chinese communists are running exactly such a system. It may seem ironic, even hypocritical, that I’m opposed to the CHICOMs incarcerating en masse vast swathes of the Muslim Uighur population in western China. After all I vehemently oppose, in fact have contempt for, the creed of Islam. But I believe people who post and comment here can make the same distinction I make between people and ideologies. Ideologies do not have rights (and Islam is first and foremost a supremacist political ideology promoting conquest and subjugation of inferiors i.e. non-Muslims). Individual people have rights. It doesn’t matter if they’re Muslim or Christian or atheists. I insist on asserting the rights of the Uighurs the CHICOMs are oppressing for the same reason I insist of asserting the rights of Christian, Jewish, Zoroastrian, Yazidi, etc., minorities the Sharia supremacist Muslims are oppressing.

The NBA? They’re not interested since it interferes with making a buck in China. So they’re on the CPP’s side.

F%$# the NBA. No, I’m not on your side, LeBron and the rest of you narcissistic greedy hypocrites. And no, I don’t want to watch a basketball game.