One law enforcement official said the girl “should be the poster child for white privilege, growing up on the Upper East Side and another home in Connecticut.” 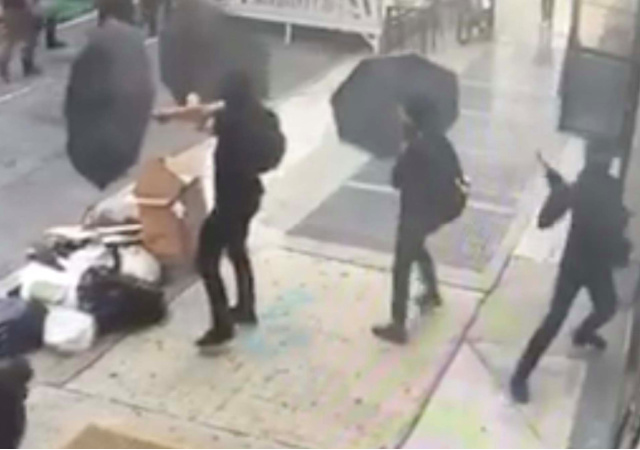 People went on a rampage over the weekend, smashing windows and causing hundreds of thousands of dollars in damage in Manhattan.

Authorities arrested eight people, including a white wealthy woman from the Upper East Side.

The group of people called themselves the New Afrikan Black Panther Party and Revolutionary Abolitionist Movement.

But one woman who allegedly took part in these riots is the daughter of an architect and child psychiatrist.

Clara Kraebber, 20, is one of eight people arrested Friday night after a roiling, three-hour rampage that police say caused at least $100,000 in damage from Foley Square up to 24th Street.

“Every city, every town, burn the precinct to the ground!” the group chanted as it moved up Lafayette Street while busting the plate glass facades of banks, Starbucks and Duane-Reades.

Virginia Kindred, Clara’s mother, runs Kindred Arch.Works. Her firm “has designed spaces for Columbia University and NYU, and worked on numerous school and business spaces throughout the city.”

Her father is Dr. Markus Kraebber, who also teaches at Columbia University.

Kraebber’s family bought an apartment for $1.8 million in 2016. They also own “a 1730 home — featuring four fireplaces, according to property listings — in tony Litchfield County, Conn.”

But this is not Kraebber’s first time acting out in the name of social justice. She participated in a rally in 2014 in Manhattan on behalf of Michael Brown from Ferguson, MO.

Kraebber attends Rice University in Houston, TX. She is a member of Rice Young Democrats.

One law enforcement official told The New York Post that Kraebber “should be the poster child for white privilege, growing up on the Upper East Side and another home in Connecticut.”

Kraebber now faces “a maximum of four years prison on her top charge of first-degree riot.”

The destruction caused more outrage from already frustrated business owners. It’s bad enough that it’s hard to reopen due to the pandemic, but now the lawlessness spreading throughout the city:

“I’m sick of this f—ing bulls–t!” raged Kevin McGrath, owner of the Five Points Academy boxing gym across the street from a beseiged Starbucks at Lafayette and Grand streets in Soho.

The java giant was among several businesses damaged Friday night by BLM demonstrators during a planned protest march north from Foley Square to Chelsea and across to Flatiron, resulting in what authorities said was $100,000 in damage to stores and banks.

“What they’re doing is not helping anyone,” said McGrath, 52. “I’ve been in this neighborhood for 18 years, I’ve been frustrated business-wise many, many times in my life, but I didn’t pick up a brick out of frustration and break somebody else’s small business.

“It’s completely wrong . . . They all should be put in jail, as far as I’m concerned. I thought this s–t was over!” he added.

notamemberofanyorganizedpolicital in reply to n.n. | September 7, 2020 at 5:26 pm

Can mommy and daddy pull some strings for her? I’m sure it is just a big misunderstanding.

It was all done in the name of “social justice.” There is no greater love.

This is what a good swath of “Gen Z” looks like — infantile, coddled, spoiled-brat ingrate-narcissists with no intention/desire to earn an honest living, but, who are fully-versed in the all the latest Dhimmi-crat “social justice” fashions (i.e., bullying totalitarianism), and, who seek meaning, fulfillment and relevance in life, by attaching themselves to sundry totalitarian movements, e.g., Socialism/Marxism, “Submission,” “trans” totalitarianism, etc.

These are empty, miserable and soulless people. They only know how to destroy, but, they are incapable of creating anything, themselves, even as they enjoy the fruits and comforts of others’ efforts.

They also sound like this, even when they’re older.

Listen to this recording and hear the amazing ignorance and arrogance of these psychopaths:

“Genocidal maniacs” sounds about right. That is not hyperbole.

On a Vernon Law baseball card I got in the 1960s Law stated a wisdom which has stayed with me ever since reading it,

“Life’s a tough teacher. It gives the test first, then the lesson”

Little Clara stands poised to learn some life lessons from the bull dykes she’ll be meeting in prison.

As an aside. So much did I appreciate that little bit of Law wisdom that, two years ago, I looked up Vernon Law, found he was still alive, got his address, and wrote to him about that quote, expressing my appreciation. To my surprise he wrote back, enclosing a signed baseball card along with a personal note. This one I won’t lose. In addition to his Cy Young award he was the winning pitcher for two of the Pirates’ four wins in the 1960 World Series when the Pirates beat the juggernaut of the American League.

“Little Clara stands poised to learn some life lessons from the bull dykes she’ll be meeting in prison.”

A nice thought, but I kind of doubt she’s on her way to prison. We’ll see if the DA even takes the case.

First, wishing rape on anyone is reprehensible. I had a family member in the slams and it was sheer terror for them. He made the error of being white and defending his property in an election year.

Second, people like her end up in a Good-Time house and is closely watched.

Thanks for the memory, fscarn.

In addition to his Cy Young award he was the winning pitcher for two of the Pirates’ four wins in the 1960 World Series when the Pirates beat the juggernaut of the American League.

Nicely put. I’m a life-long fan of that juggernaut. Just 3 days short of my 11th birthday, I learned my bit of wisdom for a lifetime:

You have to wait until the ENTIRE contest is played out before you know who actually wins. (Thats another variation of, NEVER GIVE UP.)

By the way, I had the real joy of working in the Stadium during juggernaut games as a beer vendor.

There’s a lesson in the 2016 election that can be drawn from that 1960 World Series. Viz., baseball’s own version of the Electoral College. The first team to win 4 games is baseball’s champions. The 1960 WS is a memorable example of how baseball’s EC works. It was a modern day David-Goliath battle. All the polls (i.e., the baseball press) had the line down; the NYY would take the Series.

But the unexpected happened. The Pirates reached 4 games first, to the Yankee’s 3. Though the Yankees won the popular vote, wildly outscoring the Pirates, 55 runs to 27, following the established rules of MLB, the Pirates became the undisputed crowned “Champions.”

It seems you may have read “Math Against Tyranny,” as good an explanation of the purpose and value of the Electoral College, and which uses baseball as an analogy.
https://www.discovermagazine.com/the-sciences/from-the-archive-math-against-tyranny

No, I hadn’t ever seen that 1996 article, but I’m appreciative of your bringing it to my attention. Thanks.

“Even Natapoff, who grew up in the shadow of Yankee Stadium, conceded that Pittsburgh deserved to win. ‘Nobody walked away saying it was unfair,’ he says.”

And I bet that even the then residents of Chappaqua, New York, those who lived there in 1960, agreed.

60 years on, and significantly 4 years on, Chappaqua hosts a very bitter individual who probably doesn’t even like baseball or its rules.

“Experience is that thing you get right after you needed it.”

I had a teacher named Mills in junior high around 1969 who was formerly a pitcher for the Pirates. He was missing most of one finger. Not sure if that took him out of the game, but he was older and may have played in the late 50s or early 60s. Familiar with him?
He was teaching math, but I only had him for home room.

It looks like Mommy and Daddy’s plan of shipping Clara off to Texas for college, and well away from them, did not work out quite as planned. Some plans just refuse to come together.
Tsk, tsk, tsk…

PS. Holy cow! On a lark, I tried the preview button… and it worked! How long has that been going on?

Thanks, amatuerwrangler, for the heads up on the now working Preview button. Woohoo!!

gingers have no souls.

It most certainly is not! Gingers totally have souls.

In fact, every time they consume a soul, they gain a freckle.

Drat, blast,shucks, and darn! You learned our secret!!!

heh heh I was onto you right from the start LOL

Throw her in the slammer. AND make her pay for all the damage she’s done. Let her pay it from her inheritance.

Daughter of a child psychologist? That explains everything. Poor kid. No wonder she grew up so confused.

No kidding. Knew one of those and mom was always: “Use your words, sweetie”.

If only she’d had a Y chromosome she could have been Leonard from “Big Bang Theory” instead.

I grew up in a very well-to-do area. The most messed, dysfunctional family I knew was headed by a prominent and successful psychiatrist. Poor kids.

IIRC almost all of the Weather Underground members in the 1970s came from very wealthy families.

Their parents gave them the idea they did not need to exercise self-control and behave responsibly.

Things have not changed.

Same with the 9/11 terrorists. All upper middle class (or better) and educated. So much for poverty and lack of jobs as a driver of terror attacks.

Pfffft, if she sees real jail time I will be amazed. There is a two tier system these days, the DA’s friends and his opponents.

Don’t be surprised if DOJ indicts her. Does t matter that her home state is NY. If she crossed state lines to participate in a riot, she’s toast. DOJ has already started down this path. This would be a good case to make her an example in NY. Maybe it doesn’t stick, but her parents will have to shell out their retirement to defend her.

All she has to do now is a little pornography and she’ll top paris hilton and kim kardashian.

And wind up in Congress.

She deserves jail, but in NYC she’ll get off Scott free.

Actually, the worst thing about this story is a “law enforcement official” using the demeaning, pejorative term “white privilege” — to me that is completely inappropriate.

Give her a good public flogging. Singapore style…

A mother and father, in the biological sense, yes. But, no parents.

I sure hope she doesn’t miss any school!

Not to mention the autumn dinner parties at the country club.