#WalkAway Founder Chased By BLM Mob: “This was the most terrifying moment of my life”

#WalkAway Founder Chased By BLM Mob: “This was the most terrifying moment of my life” 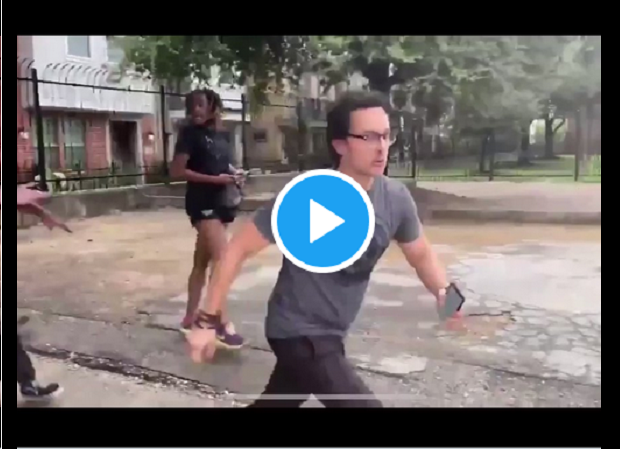 Back in 2018, I wrote about Brandon Straka and the #WalkAway movement that urges people to walk away from the Democratic Party.  His movement’s success has inspired other Dem Party exit groups such as #Blexit.

I had just spoke at and left this rally…. so glad my friends are safe! But this must stop @GovAbbott!!! https://t.co/xixdypeNXQ

Before that happened, Straka reports that another incident happened at the event itself:

Are the police on our side on not?

They haven’t been so far.

I think it depends on individual cops and where you are at.

Problem is that police are caught between a rock and a hard place.

They have to follow orders from above from idiots. At the same time even if they arrest the rioters no one is prosecuting the rioters. It’s turned into catch and release.

Look at cities that don’t have problems and you see that the politicians and the local DA let the police arrest and the DA prosecute the arrested.

Do your freaking job!

They too took an oath to defend the constitution!

I don’t know who said this but:

“If there is nothing you are willing to die for, you probably have nothing to live for.”

This is the time to stand for what you believe in. If if being a cop is just a job, then you have no one to blame for how your life sucks. That oath isn’t just a jumble of words you have to recite like a monkey.

Unfortunately much of police leadership, within both departments and civil government, believe that the oath is just so many words. I direct your attention to the several police officers who recently announced their intentions to abide by their oaths who were fired or otherwise relieved of their duties. Governments insist commissioned officers and other officials take the oath as a condition of employment, but they have no intention of permitting the oath takers to abide by it. They would probably prefer to eliminate the oath, but that would give away the game.

I live outside Dallas and the PD is getting reamed a new one by the district attorney and city council for how they handled protests earlier this year, overtime money will probably be cut, etc. I don’t know if this had anything to do with the pressure on the PD, but it’s sickening.

Why would anyone want to be an officer today? Or stay on?

Forget the worthless Dallas PD. What is Greg Abbott doing? He looks so weak and ineffective he might as well be a Democrat.

Depends on who governs your city, doesn’t it.

I’ve never understood why police were ever called “pigs”. They are more like dogs. They obey those who feed them (sign the pay check).

If the time comes to herd us into trucks, it will be the police screaming “raus! RAUS!” Not the military.

Kaiser’s Maxim: “The Left will always, eventually, resort to violence, threats of violence, or glorification of violence to advance its agenda. Always.”

The vile, violent Left end game is not intersectionality, PC language, racial justice, income equality, or political systems. The end game is TOTAL POWER AND COMPLETE DOMINATION by any means necessary. See: ‘How to Overthrow the State’

We are at war. Prepare accordingly.

The saddest thing is that a lot of people on our side are still not pursuaded that we are at war.

The left’s plan now is full revolt even if PDJT wins by a landslide.

Agreed. Kamala Hahreese even admitted as much in a recent interview with some slope shouldered mediocrity in media:

I learned a valuable lesson in Sunday school from the book Esther about the Jewish holiday of Purim: When someone threatens to kill you, believe them (and prepare accordingly). Sadly, far too many are far too comfortable with ‘the fog of war’ to prepare accordingly.

We have been at war since at least the ’60’s. Only one side is fighting.

If they’d been fighting for their right to sleep with underage boys ANTIFA would like them just fine.

The rioters are vicious. ANTIFA has been chattering amongst themselves about bringing guns to the “peaceful protests,” and they sure as hell don’t mind harassing people and hurting them. There have been a lot of injuries to both civilians and police targets.

I am glad I live in an area where the mayors and city councils know that their function is to keep the peace.

Antifa/BLM have been bringing guns to “peaceful protests.” There were guns in the CHAZ, Kenosha, Portland, Austin, St. Louis, Chicago, etc.

One can thank the crappy Dallas City Council which just defunded the police by 7 million. When Dallas had riots, police stood down. My building had some people who went out by the pool with rifles and BLM and Antifa bypassed my building and broke windows and doors across the street.

Definitely ugly and inexcusable. But with no pun intended, they were walking away. That was not running.

I have to wonder what would be left if BLM insisted that all its so-called white supporters just Go Home.

Would that he had a gun, perhaps a scalpel, a car to escape his persecutors.