In one incident captured on video, a protester grabs a diners beer and chugs it. 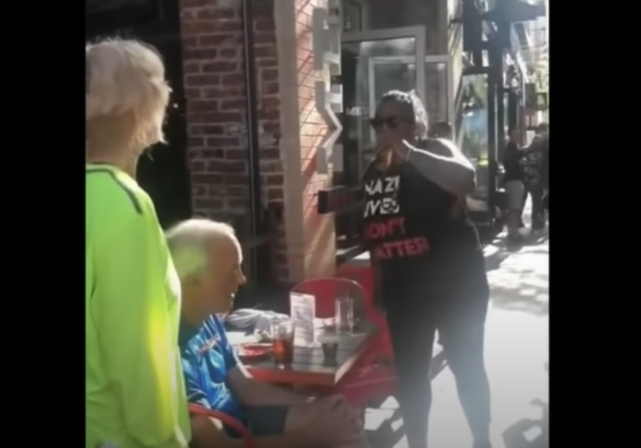 In Pittsburgh, three Black Lives Matters protesters have been charged after law enforcement identified them as the individuals harassing local diners. In one incident captured on video, a protester grabs a diners beer and chugs it.

Pittsburgh police filed the charges Monday against Shawn Green, Kenneth McDowell and Monique Craft in connection with an incident that took place two weeks ago on Labor Day during a protest march in the city’s downtown, Pittsburgh local media reported.

The restaurant was identified as Sienna Mercato.

One of the videos shows Craft, in a T-shirt that said “Nazi Lives Don’t Matter,” walking up to an outdoor table where an older White couple was dining. The video showed him grab a glass of beer off the table and chug it.

Craft, 35, who identifies as nonbinary, was charged by summons with theft, conspiracy and simple trespass, the Pittsburgh Post-Gazette reported.

The paper quoted Craft as saying the videos only show one side of the story and that she was offered the beer.

McDowell, 33, was charged with possessing instruments of a crime, conspiracy, harassment and two counts of disorderly conduct, according to the paper.

The complaint said he swore at the White couple at Sienna Mercato and gave them the middle finger, the station reported.

Craft has a November court date to answer the charges.

Curiously, the very same video shows Monique begging the white fellow to punch xir lights out. Just listen hard, some of it is subtext.

The judge in this case should impose a million dollar bail on these thugs, as did the judge in Lancaster PA.

Criminal action is great, but what’ll really get them is the civil lawsuit.

Against whom? These people presumably have no money worth going after.

Well there was that sorority girl at a very expensive private college who was arrested in Lancaster. Probably, some of these people have assets worth going after.

You can garnish any income (including tax returns) they make for the rest of their lives if you sue them in civil court and win. You will have a nice little side income if they ever buck up and have a real job. someday they will actually have to try doing that.

“Craft, 35, who identifies as nonbinary”

He’s lucky not to identify as room-temperature — which is undoubtedly why they don’t pull these stunts more often in redder communities.

Weird how the non-binary can have such binary views about everyone else, such as “America is racist” and “there are no good cops”.

The key word is “identifies”. Not that it does not say the person “is” non-binary. Even Bill Clinton knows what the meaning of the word “is” is. Simply identifying as something means nothing. It is just fantasy, nothing more. Therefore it should say “misidentifies” as non-binary.

Wait a second…him? “He” took a beer. I don’t think so. Not exactly the paragon of feminine virtue but not a man.

Born a man = always a man. Even if the man “identifies as non-binary.”

I can actually sympathize with the non-binary part. I tend to think in decimals.
But always remember there are only 10 kinds of people — those who know binary and those who don’t.

Well he sure ain’t no lady.

I was confused by that, until I realized it’s probably journalistic ethiklasms or something that make them refer to a “nonbinary” person equally and alternately using him and her.

The one guy on the bike who was mobbed appears to possibly be mentally incomplete. He wound up his punch like the three stooges. Not too mention he was tiny.

They’ll go after anyone. Savages.

I was thinking that was staged but you may be right. 3 stooges lol.

Is that a man of the lesbian persuasion? I swear “he” is wearing a bra.

This is all fine and well, but have they run this past the DA? Is the DA a woke type who will drop all charges because Black Lives Matter?

The paper quoted Craft as saying the videos only show one side of the story and that she was offered the beer.

According to the TV news clip, she told the reporter “The lady told me ‘Go ahead, you can have it.'”

Exactly the sort of thing someone wanting to avoid a fight will say when some brute barges in and grabs your food.

I don’t know about you, but I certainly wouldn’t want it back after s/he had drunk part of it. So yeah, go ahead, finish it off.

I should add: race has nothing to do with it. I’ve had whites pull that crap on me too and, being raised Midwestern nice, I responded the same way this Pittsburgh lady did.

… and I’ve never wanted to finish a glass my own *children* have drunk from either. My ex used to offer me some of her drink and I always declined. It’s just too gross, even worse than double-dipping the salsa or the guacamole!

I’m sorry, but when the woman with whom I’ve been swapping bodily fluids for decades wants to try my drink or wants me to try hers, I don’t even give it a second thought.