Joy Reid Called Out By Liberals for “Islamophobia”: Says Trump Supporters Are Acting “Like Muslims Act”

Joy Reid Called Out By Liberals for “Islamophobia”: Says Trump Supporters Are Acting “Like Muslims Act”

Muslim Advocates: “Hate and bigotry should not have a home on MSNBC” 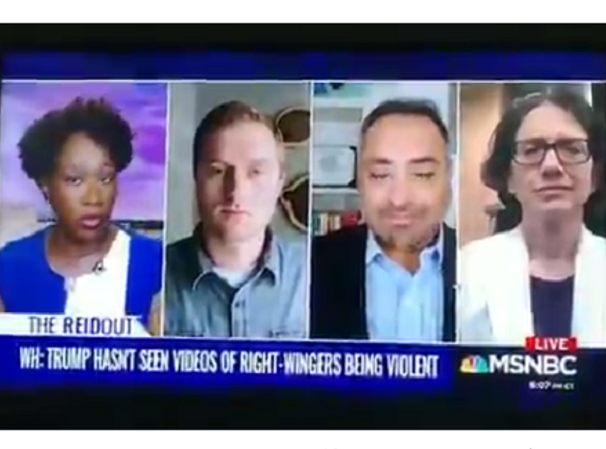 MSNBC personality Joy Reid is infamous for her 9/11 trutherism and for anti-Semitic and homophobic statements.  We can now add “Islamophobic” to the long list of her offenses, and the left is not happy.

In an attempt to attack President Trump, Reid engaged in what the left likes to call “casual” [insert ism/phobia].  In this case, it was casual Islamophobia.

It’s been a while since I suffered through a Reid clip, so I had forgotten how sluggishly her brain seems to work and how inarticulate she is.  While her goal was to zing Trump for “radicalizing” his base, she ended up stepping in it with Muslim members of Congress and various groups by using the radicalization of Muslims as her illustration of how she sees Trump’s influence working on his base.

Setting aside the inherent problems with this comparison of Trump supporters to radicalized Muslim terrorists, Reid is now facing a barrage of demands for an apology.

Reps. Ilhan Omar, D-Minn., and Rashida Tlaib, D-Mich. have called on MSNBC anchor Joy Reid to apologize after she suggested Monday night that President Trump has radicalized his supporters in the same way that “Muslims act.”

“Leaders, let’s say in the Muslim world, talk a lot of violent talk and encourage their supporters to be willing to commit violence, including on their own bodies, in order to win against whoever they decide is the enemy,” Reid said on her new show “The ReidOut.”

. . . . Reid did not mention the issue on her show Tuesday night, which prompted criticism from the civil rights organization Muslim Advocates.

“Hate and bigotry should not have a home on MSNBC,” Muslim Advocates added. “Joy Reid and MSNBC must take responsibility for what they have unleashed by apologizing on air and agreeing to meet with Muslim leaders to ensure this does not happen again.

Indeed, Reid is facing a great deal of pushback from the left.

Honestly, this kinda of casual Islamophobia is hurtful and dangerous.

We deserve better and an apology for the painful moment for so many Muslims around our country should be forthcoming. https://t.co/megnZyL9dd

Words matter and these words feed into the harmful anti-Muslim rhetoric & actions that we continue to see in this country. It is even more painful to hear it from someone I admire.

We deserve an apology. https://t.co/Ei1R4FojZJ

Last night @JoyAnnReid said on air that Muslims are violent extremists. This anti-Muslim smear invites white nationalist violence against our community. Reid and MSNBC must apologize and commit to meet with Muslim leaders: https://t.co/65R3k17B7H

Nearly 1/4 of the world’s population acts how? https://t.co/jOta8uNHsZ

These remarks are pretty appalling. Joy Reid's subtext is more or less that Trump is "radicalizing" his supporters, just like barbarians abroad do – "the way Muslims act" is racism plain and simple. https://t.co/HB9eQc2MyC

From the Daily Beast:

While receiving little attention following its airing, the liberal host’s remarks eventually sparked outrage when a video clip of the segment was widely shared Tuesday on social media by journalists and activists. The “how Muslims act” remark specifically drew complaints that she trafficked in “dangerous” anti-Islamic tropes, stereotypes, and generalizations.

MSNBC and Reid did not immediately respond to requests for comment.

Zakir Khan, board chair of the Council on American-Islamic Relations in Oregon, said the MSNBC star’s remarks were “so unbelievably Islamophobic it’s ridiculous,” asking whether she planned to apologize for the way she “stereotype[d] an entire group of Muslims.”

Reid will likely weather this as she has so many other instances that have gotten less-deranged lefties cancelled, but the writing is on the wall.  An apology of some sort will have to be made, but if MSNBC is smart(!?), someone more “woke” will write it for her to read on the air.

Joy Reid has stepped on his crank like this dozens of times. Whitey would never get so many passes.

Conclusion? MSDNC and progs in general are flaming racists.

Joy Reid is a perfect example of why we need a minimum IQ standard to hold office, say 110.

How about for television personalities?

If she wwre straight she’d be just as silly.

“Reid will likely weather this as she has so many other instances that have gotten less-deranged lefties cancelled, but the writing is on the wall.”

Meh. She is black Communist female, and I’ll bet that combination outranks Muslim in the Victim Olympics. I doubt if this will cost MSNBC a single viewer or sponsor.

This is pretty much my take, too. In the intersectional hierarchy, Reid checks more boxes and gets a pass. Again.

notamemberofanyorganizedpolicital in reply to Recovering Lutheran. | September 3, 2020 at 12:24 am

The Friendly Grizzly in reply to notamemberofanyorganizedpolicital. | September 3, 2020 at 2:03 pm

If she were straifht, she’d be just as silly.

You see, they don’t like to admit it, but they know, in the inner recesses of their shriveled little hearts, they know that we’re right on all the moral issues.

As examples, they know that,
— Islam’s not a religion of peace but instead is a cruel, murderous cult
— socialism and communism, along with every other collectivist systems, are evil and have always resulted in the death of millions
—welfare handouts blunt personal responsibility
—and on and on. Add your own; examples abound of how wrong the left is

And most importantly, they KNOW, just like we know, that it’s a child, an unborn child, and that they are sponsoring murder in the womb. They know.

On the other hand, Muslims seem to have a slightly better work ethic. We are all supposed to embrace diversity, even when doing so is not our, and especially in our children’s best interests.

“While receiving little attention following its airing…”. It’s MSNBC. No one watches them.

Whipping out my hanky to dab at my crocodile tears.

Hey, how dare she slime Muslim terrorists that way.

I can’t tell which half of the comparison Trump’s objecting to.

Some of them have just gotten on the payroll and haven’t gotten up to speed with the talking points yet.

They can’t tell the difference. But reality is that if allowed to do so, Muslims will turn blacks into an even smaller minority, and I guarantee that they will not have sympathy for blacks.

“”….the inherent problems with this comparison of Trump supporters to radicalized Muslim terrorists,””

Because any right-thinking leftist knows that Muslims would never engage in honor killings or suicide bombings while screaming “God is great!” the way those ultra-extremist right wing Trump supporters do.

All the names we’ve been called …

Rolls off the tongue, doesn’t it? 😉

Another black person that thought they could get away with saying anything they wanted. Welcome to your own woke dungeon.

Who called of a political candidate to be disappeared? Who called for blood in the streets?

(Hint: the name of these people are well-known, and they are Democrats.

Hate and bigotry ,is Reeds strong point. It’s what she is.

Joy Reid is pelosi without the hairdryer.

It was inevitable. When you make every class a victim class, eventually you will always step on someone’s balls.