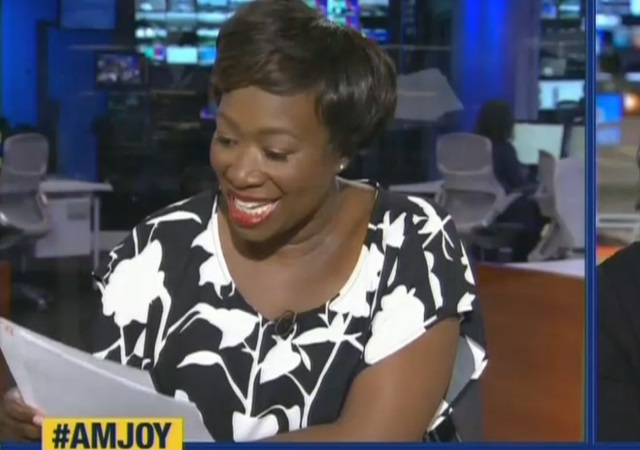 Joy Reid’s old blog is a gift that keeps on giving. In April, homophobic passages from the site were revealed. Reid said she didn’t write them, a claim that even many of her liberal colleagues don’t believe. Then it was reported that she promoted a 9/11 “truther” movie.

Now there is a new controversy involving a vile depiction of John McCain.

Joseph Bernstein and Charlie Warzel of BuzzFeed have the story:

The October 2007 post, titled “Baghdad John Strikes Again,” discusses the infamous claim from McCain, then the GOP presidential nominee, that he would “follow Osama bin Laden to the gates of hell.” The image appears at the end of the post, which was apparently penned by Reid.

The McCain post is the latest in a series of archived items from Reid’s blog that have embarrassed the AM Joy host and her network. Though Reid apologized for several anti-gay posts last December, she later attributed others to a hacker.

You can see the image in the tweet below:

New from @Bernstein and me: Joy Reid Published A Photoshopped Image Of John McCain As The Virginia Tech Shooter On Her Old Blog https://t.co/KMkHh8XgIf pic.twitter.com/QZiLgUXCWE

How bad is this? This bad:

Ok. I’m truly over it with this mess. First the homophobic posts, then the 9/11 “Truther” posts, and now this nonsense with manipulating images. And watch @JoyAnnReid blame this on a hacker… or better yet… Ambien. It’s time for her to go too. https://t.co/MDttdpM50p

As if all of that isn’t horrible enough, it has also been revealed that she once agreed with Iran’s Mahmoud Ahmadinejad that Jews should be made to relocate from Israel to Europe.

Bre Payton writes at The Federalist:

In Old Blog Post, MSNBC’s Joy Reid Attacked Wolf Blitzer For Being Too Nice To Jews

In a post from The Reid Report dated December 5, 2005, Reid said that Mahmoud Ahmadinejad, then-president of Iran, was really onto something when he suggested that the “Zionist regime” of Israel should just relocate to Europe.

“God is not a real estate broker,” the blogpost reads. “He can’t just give you land 1,000 years ago that you can come back and claim today.”

You can read the whole thing here. The short version of Ahmadinejad’s proposal is to make all the jews pack up and leave the Middle East so they can hide out in a German province somewhere and leave everyone alone.

What does it take to lose a show on MSNBC?

What would Joy Reed be doing for a living, were it not for the need to fill quotas under affirmative action?

Hmmm… Her attitude is her greatest asset. She could easily run a string of call girls and enforce the rules at the same time; even perhaps an entire house. She could run a few gaming tables in a big city – she does dress up nicely, but there’s a LOT of bulk on her frame. It’s not her fault, it’s all genetic! ROFL She could become a crooked union steward, terrorizing both management and the union members. She’d make a great back-hoe operator, especially in the middle of winter with a 30/mph wind blowing @-15F degrees.

2) Set minimum IQ standards for both jobs and political office.

3) Maybe we should have minimum IQ standards for reproduction 🙂

She could do a duo act with Dnesh D’Souza. They could take turns lying, fabricating and resembling in the service of their warped ideologies.

D’Souza would get top billing.

dissembling in the service

Or the left could do their push for pedophilia sooner than later. I’m sure you’ll come up with some reasoned explanation why this is good for America.

https://twitter.com/AnOpenSecret/status/1001614348681347074?ref_src=twsrc%5Etfw
ABC / Disney hires convicted child molester Brian Peck to work on children’s TV show ‘The Suite Life of Zack and Cody’ Just 1 year after he is released from prison. Fires Roseanne and cancels her #1 show within hours, for a tweet.

She’s a Leftist, normal rules of civility and behavior do not apply.

Donald Trump follows the normal rules of civility and behavior? I guess he must be a leftist.

Yes, you got it in one. Finally.

Couldn’t happen to a nicer jacka$$.

Support for a republican is ‘what it takes’

I would think that at least half of these talking heads felt the same way as Joy Reid. Remember the DNC released emails and the content they included?

The left is filled with people who are “homophobic”, bigots, racists, and so forth, probably to a greater extent than the right is. I think the right is probably more leaning toward “I don’t really give a S**T about what these people do in private.”

The left just pretend well, in large part, so they can get the votes. It may explain why they are so fine with support of Muslims, as their beliefs have areas that coincide with their each other.

I expect a slap on the wrist, her coming out as being enlightened now, along with finding her “hacker” (which will probably be her alter ego or something), and then all will be forgiven because the left is oh, so compassionate. Hate Trumps Love, or something like that.

The bigots on the left also think everyone’s really like them, except that Republicans must be slightly worse, because they’re right-wing, and that means bigoted, doesn’t it? They don’t believe there’s anyone who’s really not bigoted, and not just pretending.

re: “What does it take to lose a show on MSNBC?”

Becoming a Trump supporter should do that job nicely…. OR….having an image of Mike Pence tattoo’d on her chest, then showing it to everyone who walked into the studio….OR….start saying really positive upbeat things about what ‘white people’ do, like getting married and going to work, etc.

Oh heck, all you would have to do to be permanently banned from MSNBC is to say “you know I think all of this Russia Collusion stuff is mostly made up, and it looks like if anyone colluded with Russia, it was Hillary.”

BAM! Anyone saying that would be cut off and thrown out of the studio as fast as the security guards could get there.

I better start scrubbing everything I ever posted online.

Criticizing Republicans no matter how vile the form of criticism certainly won’t hurt her at MSDNC and agreeing with critics of Israel would most likely enhance her status there.

If the anti-gay posts didn’t knock her out it is highly unlikely these latest revelations would.

“As if all of that isn’t horrible enough, it has also been revealed that she once agreed with Iran’s Mahmoud Ahmadinejad that Jews should be made to relocate from Israel to Europe.”

I don’t think we should force jews to do anything, but I would welcome having them come to America, especially if it was an exchange program where people with Joy Reid’s mentality were sent to the Middle East. They have so much in common with Palestinians 🙂 Dull witted, poor child rearing, corruption.

Somebody save Aiken’s tweet for when it’s his turn at the stake. It’s going to be fun when these Identity Tribes start turning on each other.

I agree with Dennis Prager that if the entire world made an effort to live by the Ten Commandments, it would be a far, far better place. Joy’s behavior may be prohibited indirectly by some of the commandments, but it would be nice if there were a specific commandment to cover this kind of stuff: Thou shall not be a hypocritical, lying scumbag. Or words to that effect.

And your point is? In the hypocritical lying scumbag stakes he may be a runner, but he’s lagging far behind, and losing ground fast.

It makes no sense for the Jews to relocate to Europe; soon ALL the Muzzies will be in Europe and the Jews will have their homeland all to themselves.

Jews need to follow palestinians suggestion that someone needs to be driven out of the area.

Joy Reid’s success in liberal media hasn’t come despite these ugly old posts, but rather because of them.

Some hacker should add Reid posts that attack Obama, Hillary, and violate Progressive Fascist ideology. See how long it takes for her to be fired.

Those darn hackers.
Why won’t they leave poor Joy alone?

Joy and Samantha, on the other hand…

I understand that MSNBC has cleared Reid, claiming that she has evolved over the years and has become a different and better person. In other words, they finally came out with the version Reid should have come out with in the first place and saved herself a very considerable amount of trouble.

The fact it lives down to what us cynics were pointing out in the first day or two is neither here nor there.

she has evolved over the years

So was she an ape before?

Did she evolve and change over the years to become a better person? It wold seem her knee jerk response to blame unknown hackers instead of taking responsibility for her actions would indicate otherwise.