Is it any wonder police forces nationwide are experiencing mass retirement and resignation? 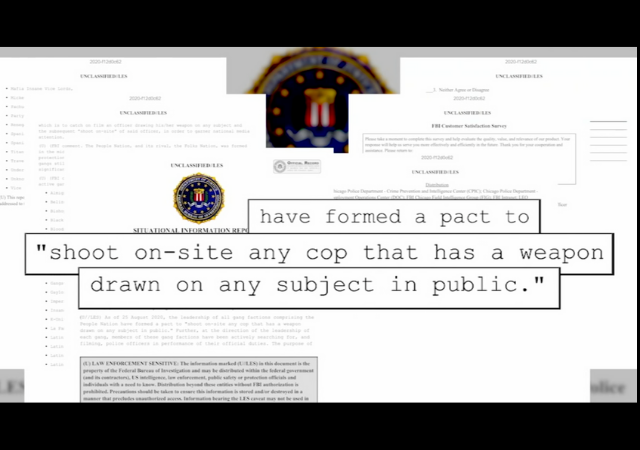 According to Chicago local news, a cabal of some three dozen gangs have formed a pact to ‘shoot on-sight any cop that has a weapon drawn on any subject in public’.

A federal intelligence alert obtained by the ABC7 I-Team has gone out to Chicago-area law enforcement with an ominous warning: nearly three dozen cold-blooded street gangs “have formed a pact to ‘shoot on-sight any cop that has a weapon drawn on any subject in public’.”

The “situational information report” from FBI officials in Chicago dated August 26, 2020, states “members of these gang factions have been actively searching for, and filming, police officers in performance of their official duties. The purpose of which is to catch on film an officer drawing his/her weapon on any subject and the subsequent ‘shoot on-sight’ of said officer, in order to garner national media attention.”

Alerts based on police intelligence, no matter how unspecific, are frequently distributed to law enforcement agencies according to investigators, especially when they involve threats to officers. The FBI’s “Potential Activity Alert” is from “a contact whose reporting is limited and whose reliability cannot be determined.” That could mean the information came from a police street source, a cooperating witness in an ongoing case, or from discussions overheard on a wiretap or other surveillance recording.

For CPD Superintendent David Brown there is an overall “sense of lawlessness” currently being dealt with by those who serve and protect. Although not commenting directly on the FBI alert, Brown on Monday said the danger to police officers is real and increasing.

This comes after a gruesome weekend in Chicago in which 54 people were shot including two Chicago police officers. The CPD officers are expected to live but ten people died from gunshot wounds during the time span.

A national movement to defund police departments and a lack of support for their law enforcement efforts has led to a mass departure nationwide.

Seattle’s Police Chief resigned in August after a defund effort was passed by city council.

Applications to join police forces are also at frightening lows.

I don’t know about Chicago. But, the NYPD has reduced officer involved shootings from over 700 a year to around 80 in just 20 years.

I get the feeling that trend will be reversing now.

In light of the gangs publicly announcing this, can police start taking those gang members in feet first?

No, although this is the result the Democrats at the national level seek.

But… but… this is the result I seek as well. Now I have a cramp in my voting muscle.

Officer-involved shootings in San Diego had also dropped like a stone over the last 3 years. That did not prevent the local “activists” from claiming that “nothing has worked” and that we needed “protests” against “police brutality” in San Diego county.

The only riot in San Diego County this time around was in La Mesa, and for the second La Mesa “protest” the whole county mobilized, along with local citizens, to make very sure the protest remained peaceful.

Much of the drop in police shootings can be attributed to the overall drop in proactive police work. Call it the “Ferguson effect” if you want, but when it was robustly demonstrated that even when officer Wilson was cleared of wrongdoing in the death of Michael Brown, he was vilified and had to leave his job and relocate his home. The lying left uprooted his whole family. This did not go unnoticed by police officers nationwide.

Self-initiated activity dropped off significantly, which meant that officers were avoiding those activities that deterred crime to avoid confrontations that might lead to a use of force. This was self-preservation. Confrontations with criminals went down and crime went up.

In a round about way, the left did do something to reduce shootings, at the expense of the citizenry who were now at the mercy of the criminal element.

He didn’t have to leave his job. I don’t understand why he did. If they wanted him gone he should have made them compensate him for all his potential earnings for the rest of his career, since he’s never going to be able to work again.

No. He did need to. If he had remained, he would have been a lightning rod for every a complaint every time he even looked at someone, or even wrote a parking ticket. He would have been “dead meat” if he ever encountered someone who resisted and he had to do as much as put an arm bar on him.

I don’t know your experience in such matters, but it certainly is much different from mine.

I thought I read somewhere that Officer Wilson found employment as leo with a department in Montana even before all the legalities in MO were over. I’m hoping anyway as he seemed like a regular guy forced into a impossible situation by a thieving thug.

A background article about Officer Wilson and his wife.

Their civil rights, have been and continue to be violated.

Isn’t it annoying how many resources we have to waste to be sure these infants behave during their temper tantrums?

So 1930s history repeats itself.

That may be a best-case scenario. We could actually be heading towards having armed militia (street gangs) becoming the de facto government in deep blue hellholes like Chicago, New York City and Portland.

Cue the media and progressives to try and change the language of murderous gangs to “social justice protesters”.

The result: get pulled over for even a broken taillight and you’ll have to sit and wait until more cops show up.

Actual felony stops are already a light show to rival any rock concert, but now every stop will be a potential felony stop, just in case.

Reach for your registration and insurance card very smowly or risk getting shot.

Lightfoot’s Chicago is rapidly going down the tubes.

Following some twitter accounts that report the violence reveals that many once relatively safe parts of the city experiance violent crime almost every day now. Often multiple times in a day. In broad daylight.

Mayor Lightfoot’s may not be as dire as former Somali President Ali Mahdi Muhammad, whose actual authority did not extend beyond the control of a few city blocks in the capital. But give it a few more years, particularly if the Communists seize power in November and ram their destructive economic policies down the nation’s throat.

Time to get the black churches involved.

That may have worked while there were two parent homes, not so much now.

The Left wants a Kent State incident that matches the narrative they promote. They almost got it in Kenosha, but people of the wrong skin tone got shot. I think they want to escalate things in a way that provides them with a win no matter what happens in the election. If they can escalate to a point where Trump has to puts in major cities and those troops have to start shooting, they can blame Trump. If they can get armed white civilians to do some vigilante work, they can blame Trump. If Biden wins in the midst of armed rebellion, they can go full on gun grab.

The problem is that we’re getting very close to armed insurrection with people being shot at in vehicles and people gunning up on both sides. Throw in the street gangs deciding they can turn their guns on the police and on anyone walking down the sidewalk and the Left will get what they want, which is pushing Trump to go “dictator” to restore order. Once that happens, they will show you what they really want.

As for Chicago, it is close to being lost. Downtown is an ongoing mugging and armed carjacking zone. You’re a fool if you go down there. This stuff is happening in broad daylight. And the State’s Attorney can’t let the perps off fast enough. It is truly sad that we’ve devolved so far so fast.

Evolved. The fitness function has changed.

Progressed. Everyone has a right to define how monotonic change is qualified.

And, of course, liberalized or diverged, wildly, catastrophically.

I used to work in Chicago’s loop area. Downtown to the unfamiliar. Place would be crawling with tourists, shoppers and beach goers. No more. The taxes lost by CGO are going to be billions. Sales tax, hotel tax, cta fares all revenue cut in half and yet the imbecile of a mayor tells President Trump FU.
Any sane citizen who goes there especially after dark takes a huge chance of being a crime victim.

I wonder who’s buying everything up cheap?

“Throw in the street gangs deciding they can turn their guns on the police and on anyone walking down the sidewalk and the Left will get what they want, which is pushing Trump to go “dictator” to restore order. Once that happens, they will show you what they really want.”

But the day that happens will be the last day anybody gives a squat about what the Left wants.

That – and not true Communism – is what the Antifa/BLM brownshirts are creating, whether or not they want to admit it.

The vultures have come home to roost. However, how can we welcome the fleeing citizens from these cities knowing the political contagion they carry? The Obama Admin wanted to build low cost housing in suburbs … no need now.

Cops out there, stay safe and God bless

Three dozen gangs… That phrase alone should point out what a failure Chicago governance has been.

Seattle’s police chief resigned when the cuts to the police department budget included cuts in her own salary. I suspect she might have stayed on, despite the lack of support from the City Council and the restrictions they’d placed on the police force’s ability to do its job, if only they’d left her salary alone.

She was, after all, hired after many of those restrictions had already been enacted in response to previous BLM complaints about the department’s methods. So she’s always been OK with hands-tied policing. But this time it was personal.

Chicago Police are going to have to be more strategic–and stealth–in how they deal with these gang members.

Perhaps better to go head on raids, guns blazing? Maybe start the raid with a few RPGs, and then take down what is left as they are fleeing?

Laquan McDonald would probably argue that the Chicago Police Department is a gang itself.

If the gangs make war on the police, one can only expect the police to hunt down the gang members and eliminate them.

I and many others will have a blind eye for this. Civil society and the law work only when the vast majority of the citizens uphold the law. When elements start hunting the police, or anyone else, they will become the hunted.

seems the gangs are setting the roe’s in chicago–so be it–they draw a weapon in response an an officer fullfilling his/her duty, the gang members die right there

cost-effective–no hassle with arrests, investigations, catch and release policies of bought/paid for prosecutors, just a quick exit for the perp(s)