Sen. McSally: “They are going to ram through the most radical left agenda we’ve seen in history” 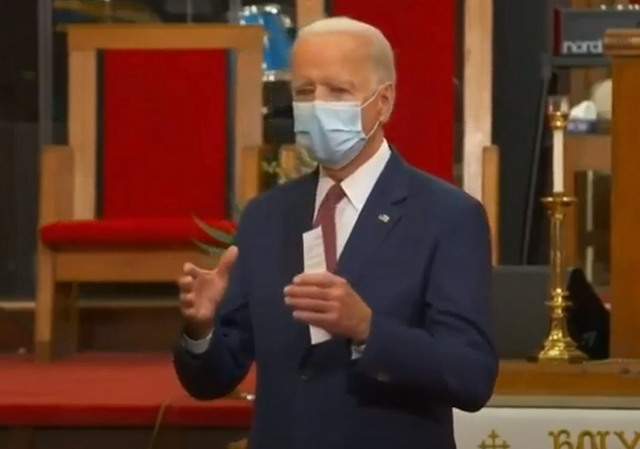 Back in 2013, then-Senate Majority Leader Harry Reid (D-NV) eliminated the Senate filibuster on all executive nominees and on all judicial appointments below the Supreme Court.

As Professor Jacobson pointed out, the only reason he didn’t include SCOTUS was that there was no pressing reason to do so at the time.  Had there been a vacancy on the Supreme Court, Reid would certainly have used what has come to be known as the “Reid Rule” to fill it under Obama’s watch.

Since then, Democrats again found themselves in the minority and expressed regret over Reid’s 2013 decision.  There has also been much gnashing of teeth over the Republicans’ decision to extend the Reid Rule to the Supreme Court, though there’s not much they could really say about that since Reid is the one who set the whole train careening off the tracks.  So they’ve watched in horror as Senate Majority Leader Mitch McConnell has filled hundreds of court vacancies over the past four years.

Democrat regret was fleeting it seems, as they are now plotting to eliminate the filibuster altogether in order to pass a “progressive” legislative slate of horror should they win both the White House and the Senate in November.

Democratic insiders are assembling a coalition behind the scenes to wage an all-out war on the Senate filibuster in bullish anticipation of sweeping the 2020 election and passing an ambitious progressive agenda.

Veteran party operatives, activist groups and supportive senators are coordinating message and strategy to dial up the pressure to quickly end the 60-vote threshold early next year, fearing that preservation of the rule will enable Republicans to kill Joe Biden’s legislative agenda in its cradle.

They’re consolidating that effort under a coalition called Fix Our Senate run by Eli Zupnick, a former communications director for No. 3 Democratic Sen. Patty Murray, D-Wash.

And of course Reid is urging this action from somewhere in Nevada.

In an interview, Reid predicted that Democrats will sweep the presidency, Senate and House, and urged them to kick off the new era by scrapping the 60-vote rule.

“If President Biden wants to get things done, he can’t play around with the filibuster,” Reid told NBC News, arguing that Americans will no longer accept a supermajority Senate threshold for action. “So I think that should be the first item of business with a Senate majority which is Democratic — to get rid of the filibuster.”

Biden describes his “progressive agenda” as “a bold, transformative platform for our party and for our country.”

So what does this “progressive agenda” entail?  Presumably, the Green New Deal—repackaged as Biden’s “Build Back Better,” blanket amnesty, socialized medicine, gun confiscation/enforced “buy backs,” crippling and job-destroying climate policies, and a host of other horrifying—and routinely rejected by the American people—items that will destroy our great country and every American’s liberty.

They know that they can’t get this “bold, transformative” platform passed without getting rid of the Senate filibuster, but they want to seal the deal this time and shore up the Senate in order to minimize the chance they’ll ever again lose the Senate majority.

Obama laid out that plan in his eulogy for Rep. John Lewis: urging a 2021 Democrat Senate to abolish the “Jim Crow relic” filibuster, he said that one of their priorities should be granting both Washington, DC and Puerto Rico statehood.

This, Democrats believe (quite rightly), will ensure that they gain four reliable Democrat Senate seats.

Sen. Martha McSally (R-AZ) warned last month that this was exactly what they intend to do.

McSally warned that if Democrats win full control of Washington, they will vote to give Puerto Rico and D.C. full voting rights on Capitol Hill via statehood, making it impossible for Republicans to ever regain control.

“They’re going to make D.C. and Puerto Rico a state and get four new Democrat Senators. We’d never get the Senate back again,” the Arizona Republican said.

“They are going to ram through the most radical left agenda we’ve seen in history,” McSally told MSNBC’s Vaughn Hillyard.

They’ll also add more Supreme Court justices and grant amnesty to all the illegals, making Americans minority foreigners in their own country.

The only option after that will be civil war.

They are planning for it except they call it a revolution. I googled it 750k dead and our population was 1/10 of what it is today. Sounds crazy.

i grew up just a few miles from where the shooting in Compton took place.

cheating with fraudulent ballots is easy.

civil war, not so much.

after all, they lost the last one.

It’s hard to believe that half the country falls for this crap.

It’s hard to believe that half the country falls for this crap.

It’s hard to believe the dems have any chance of winning anything, at all, after they just put almost everyone under house arrest for a bad flu-type disease and then went on to help loot and burn all the major cities and make a total mockery of civilized society.

How anyone could even think of voting for the dems after that is really beyond imagining – except for the America-haters and seriously demented d-bags.

Trump should have had the feds out there unapologetically shooting looters and insurrectionists, which would have been the right thing to do. The mayors who were co-conspirators in the destructions of their own cities will probably all get re-elected, too … just like Mayor Nagin did.

Beginning to feel sorry for you Americans..

We’re still better off than the rest of the world, and if/when the marxists gain power and try to enslave us, then the law no longer binds us to anything civil. We’ll take back what we lost in the 2nd American revolution.

If they were Christians they might call floating this plan a “Hail Mary” to increase turnout.

The desperation evident in these ploys is delicious.

Unfortunately for McSally, she’s running on that and hoping Trump gets enough votes in AZ to win and enough people also vote GOP downticket to drag her across the finish line. And she isn’t the only sitting GOP senator who has to hope the same thing in his/her race. McSally, though, needs Republicans who dislike her, and there are quite a few, to hold their noses while voting for her.

If Biden wins and Democrats flip 3 seats in Senate, the Dems will have the majority because of the VP and Angus King will be the most powerful person in the place because he’ll stand between 51-49 and 50-50 with the VP breaking a tie. If Biden wins and the Dems flip 4 seats King is irrelevant.

If Trump wins and the GOP loses 3 seats to go 50-50, there’s Pence for the ties and to give the GOP a majority and even then there won’t be much done for 2 years. With a Trump win and a Democrat Senate, it’ll be two years of the bare minimum of legislating, lots of hearings into the Trump admin, and at least one more impeachment if the Dems hold the House.

At this stage, the Dems flipping 3-4 seats is not unreasonable. Besides McSally, you have Gardner in CO and Collins in ME, among others, at risk.

Add Sen. Thom Tillis, NC and perhaps Sen. Lindsey Graham.
After this round of having to support them, let’s all try to get real conservatives in.

Indeed. This is the very first time I have seen McSally address an existential political issue important to her constituency, instead of diddling away her time policing VA facilities, writing public land and water rights legislation, and playing footsie with her Democrat Senate colleague.

DC statehood is never happening and I’d be really surprised if Puerto Rico got any traction either. Current events suck enough already without adding extremely unlikely events to the talking points.

I was stationed in PR in 1980-1981. My take: cut it loose. Roosevelt Roads and Sebana Seca are closed. We don’t need them anymore. Pharma makes pills in China; software is not pressed on CDs anymore.

We don’t need them.

Perhaps Trump could counter by pushing for a NorCal/SoCal split into two states, if only to enjoy the predictable and hypocritical squawks of outrage.

Or, Coastal and Inland. Inland gives us two conservative Senators.

We may need the ports.

Not once has Pertinent RICO voted to become a state in any of the plebiscites it has put on the ballot. In fact, they want the opposite—no responsibilities for statehood but American taxpayers baili8ng them out.

I’d prefer both houses require a 2/3 majority to pass anything. The less laws that Congress makes, the better and more free we all are.

Plotting isn’t the correct description. Statehood for DC and PR have been open goals of the d for years.

PR has voted against statehood many times. They don’t want it.
However, maybe a trade could be made for D.C.

D.C. expands back to it’s original boarders which includes part of N Virginia. Throw in a bit of Maryland along with the commuter counties of N Virginia and problem solved.

In exchange, the West coast State of Jefferson along with maybe inland empire CA become another State.

Of course this would mean Jefferson would be solid red and it would turn the remainder of VA red by joining the blue N Virginia counties with DC. I very much doubt that the d would accept this. They don’t believe their platitudes about the residents of DC they simply desire power.

WRT DC, the solution is simple but would be hard to do. Rezone all of it non-residential. Leave over 5 years. Nothing but Federal buildings, parks and museums. That’s it.

Never mind that it would require an amendment.