Biggest lesson: ALL the races this November are important, local races most of all. 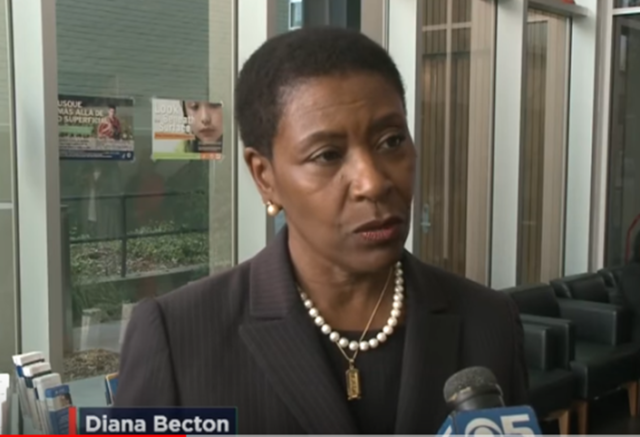 Last week, I reported that California law enforcement had arrested several people on charges of looting. The alleged crimes occurred as firemen and homeowners had fled the state’s historic wildfires.

This week, one of the region’s district attorney says that law enforcement should weigh looters’ needs before charging them with looting.

The new mandate, set forth by Contra Costa County District Attorney Diane Becton, makes it tougher to prosecute looting cases in the county, which sits just outside San Francisco.

In making that determination, they must also consider five other factors, including “was the theft committed for financial gain or personal need?

Becton, was a judge in Contra Costa County for over 20 years. She was elected DA in 2017, becoming the county’s first female and African American to serve as the county’s chief law enforcement officer.

Not surprisingly, not everyone is down for this new approach.

Her new policy drew strong rebukes from Antioch Mayor Sean Wright and the president of the Antioch police union.

“When I read the policy, it was disturbing,” Wright told East County Today. “I understand the difference between protesting and looting. Peaceful protesting is okay, looting is not.

“For the District Attorney to put out that kind of plan is irresponsible and where do you exactly draw the line on need because these are people’s businesses that are being impacted and livelihoods that are being destroyed.”

Becton has the social justice bona fides that you would expect.

Becton has also garnered a name for herself in co-authoring an opinion piece for Politico alongside district attorneys Kim Foxx of Chicago, St. Louis’ Kim Gardener and two two others, writing:

“Our criminal legal system was constructed to control Black people and people of color. Its injustices are not new but are deeply rooted in our country’s shameful history of slavery and legacy of racial violence. The system is acting exactly as it was intended to, and that is the problem. We should know: We’re Black, we’re female, and we’re prosecutors. We work as the gatekeepers in this flawed system. And we have some ideas for how to fix it.”

Reports indicate that Becton received the support of billionaire George Soros, and had a troubled path to her position.

Soros has waded into the Contra Costa County DA’s race to the tune of $275,000 backing interim Democrat DA Diana Becton.

…Becton, 66, was chosen as Contra Costa County’s interim DA last September among five applicants to the position, in a narrow 3-2 vote by the county’s board of supervisors.

The choice by the board of supervisors came despite the revelation that the former judge plagiarized significant portions of her application and unlike other candidates, including Contra Costa County District Attorneys’ Association endorsed Paul Graves, has no prosecutorial experience.

One of the biggest lessons in this story is that ALL the races in November are important, local races most of all.

notamemberofanyorganizedpolicital in reply to 94Corvette. | September 4, 2020 at 4:14 pm

Soros is really getting his money’s worth, with these dopes. A few DA’s installed across the country is all it takes to begin to inure citizens to this kind of criminal-coddling lunacy.

I agree about jurisdiction, but what makes you think that Soros and other won’t funnel money via stooges?

“was the theft committed for financial gain or personal need?”

“Judge, I needed that 72″ TV. And what’s TV unless you have a lot of liquor to go along with it.”

notamemberofanyorganizedpolicital in reply to pfg. | September 4, 2020 at 4:15 pm

JusticeDelivered in reply to notamemberofanyorganizedpolicital. | September 4, 2020 at 8:28 pm

How about getting a bus, collecting homeless people, giving them small tents, and telling them they are her guests.

Smash down her door and tell the homeless to help themselves to anything they “need”. So will she consider their “needs” or call the cops?

Persistent rumor suggests that there are no rental vans and trailers to be had in many places in California, especially the big cities. Demand is high for a reason. With DA’s like this D.A., that reason is obvious.
.

notamemberofanyorganizedpolicital in reply to DSHornet. | September 4, 2020 at 4:23 pm

JusticeDelivered in reply to notamemberofanyorganizedpolicital. | September 4, 2020 at 8:29 pm

DSHornet in reply to notamemberofanyorganizedpolicital. | September 5, 2020 at 10:56 am

That may be an exaggeration but even if it’s half that figure, that’s a lot of people who are willing to escape The City no matter the cost.
.

” but eyes be needin’ that gucci handbag! “

It is a time-honored legal tradition that all looters are to be shot on sight. No command to halt, no questions asked, no arrest. When that went by the wayside I’m not sure, but now we have looters. They have become brazen about it because nothing is done to stop or punish them.

The DA is calling this the Jean Valjean Act.

The legal system is too heavily biased against crime. Not only is some crime tolerable but acceptable per this DA. Such a statement should be grounds for dismissal.

Black is thicker than justice

I don’t see a non violent way out of this…

I agree, when we finally start clamping down on these people, they will probably up the ante, and it will be necessary to kill rather large numbers to make them understand.

This particular interpretation is wrong, as is the DA.

However, from the perspective of a National Guard soldier patrolling the streets of say a flooded New Orleans, the saying went.

There is a difference between looting and scavenging.

A looter is a guy coming out of Best Buy with a flat screen.

You help the scavenger and shoot the looter.

Now my experience is dated, but it used to be acceptable to shoot looters.

How much longer before murder is totes okey-dokey because “muh feels are hurt by seein’ the white man ackin’ all rich an uppity”?

This represents the natural evolution of the attitudes of Dhimmi-crat attorneys at DOJ, under the vile Obama and his equally-vile Attorney General, Eric Holder, a dunce who believed that federal civil rights laws should be selectively enforced, based upon an assessment of the skin pigmentation of the lawbreakers and the victims.

This is exactly why the iron-clad case against the Black Panthers was dropped — because these DOJ idiots couldn’t stomach enforcing federal civil rights laws against black jackboots, for the benefit of non-black victims.

With they also consider the needs of the victims?

No. And, in her case, especially so if the victim isn’t black.

Yes. I went there.

I’m struggling to recall the last time that a Dhimmi-crat DA didn’t coddle criminals and act as a de facto criminal advocate, as opposed to representing the community’s interests.

It is now part of the core Dhimmi-crat ethos that criminals’ needs are of greater importance, and, are to be accorded more attention and deference, than the needs of law-abiding, tax-paying citizens.

I can see where she is coming from, weighing the looter’s needs before charging them is obviously sound jurisprudence. Most of the looters, however, have homes to live in. Homeless people though would fall into the category she is referring to. Those who are truly in need should start breaking into rich homes, such as this D.A.’s home, and taking things they need. Certainly after this, they would be justified in doing so and would have the full support and backing of the D.A.

People do not despise a thief if he steals to satisfy his hunger when he is starving. Yet if he is caught, he must pay sevenfold, though it costs him all the wealth of his house. (Proverbs 6: 30-31)

I don’t see any of these DAs making mention of the “hungry thief” making restitution….

She, obviously, does not use Nancy’s hair dresser.

In her favor, she has not culturally appropriated a While hair style.

Considering a criminal’s needs is exactly what we should be doing. The system should be helping them to deal with the issues that drove them to perform non-traditionally legal acts.

This is why I have long advocated Incarceration Therapy(TM pending). To help criminals and the rest of society, too.

Once they defund the police, then when looters invade your home you can call 911 and they’ll send out a social worker tomorrow to explain how the looters need your belongings more than you do.

If you don’t like them stealing all your stuff and holding you at gunpoint, then you are a racist. Property is theft.

She’ll change her tune when her home and car get looted.

Hey, I need a lot of things, but I don’t toss a cinder block through a store window and grab those things – BECAUSE IT’S STEALING!!!

One thing I never see is looting at grocery stores.

I think it’s unlikely that looters stole bread to feed their hungry children, the Jean Valjean defense. Something tells me it was high end designer goods.

Only the best will do when Shaniqua goes to the welfare office, and Tyrone goes to dah kluhb.

It’s all about replenishing their inventory.

What, you thought they were against capitalism?

There used to be a time when elected officials considered the needs of law abiding citizens over that of common criminals. This is what affirmative action gets you. To hell with incompetent defense attorneys, here we’re talking incompetent prosecutors. Only soros could infest the system like this. That asswipe needs a round behind the ear. This da? Meh. Vote her out and then piss on her.

“ALL the races this November are important”
I believe that’s a racist statement.

It’s a fact that the Gun Control Act of 1968 was “constructed to control black people” by limiting or obstructing access to firearms. Is she in favor of its repeal? If not, she can stuff all her BS.

Go back to square one: Looters will be shot on sight.

Isn’t that what looters need?