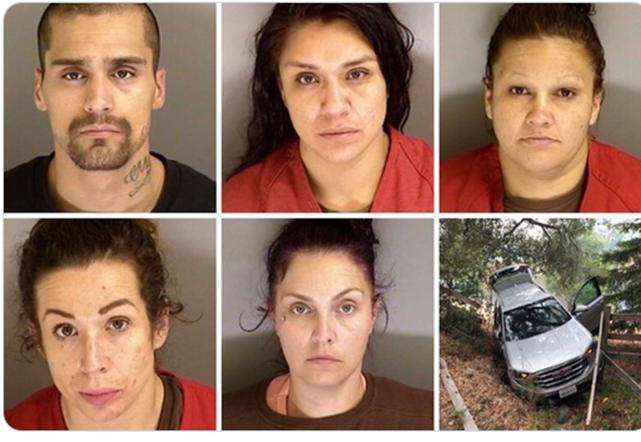 Not only do criminals loot during the fires BLM and Antifa anarchists start, they are now targeting evacuees fleeing California’s historic wildfires.

Thousands have been driven from their homes by the wildfire burning in the Santa Cruz Mountains south of San Francisco and authorities say criminals are taking advantage by burglarizing vacant homes.

Eight people have been arrested on suspicion of looting or planning to loot neighborhoods in Santa Cruz County, Sheriff Jim Hart said Sunday. More are expected as the public reports “a lot of looting going on,” he said.

At least 100 officers are patrolling evacuation zones and Hart said he’s ordered his deputies to pull over any non-police or non-fire department vehicles.

“I have no empathy, I have no patience for somebody who’s going to come into our community and steal from people who have been evacuated and victimized and traumatized,” Hart said during a news conference with county District Attorney Jeffrey Rosell.

In one case, a firefighter’s wallet was stolen.

During a separate press conference, California Department of Forestry and Fire Protection (Cal Fire), Battalion Chief Mark Brunton called the incident “sickening” and said the firefighter’s wallet was stolen and his bank account was “drained” while he was at work directing firefighting crews in the area.

“That’s the extent these people have gone,” Brunton said. “Again, this is why we’ve asked for people to evacuate. The sheriff’s department has done a fantastic job in trying to wrangle this, but again, this is what we have as a result.”

Now, in addition to the blazes, evacuees are worried about looters.

“It’s concerning, because we had to leave without getting any of our belongings in order,” Brewster said. “Literally, everything we own is there.”

He said he feels really sad that there are people “in a low enough place that they would prey on others in this way.”

Among the items stolen from houses were firearms and, in one case, an outdoor heating system, officials said.

“These five decided to victimize several of our community members who are already hurting.”

You loot, you go to jail.

These 5 experienced that today.

There is some good on the fires themselves. The weather is now working with the firefighter and not against them.

“The weather’s really cooperating with us,” said Brunton, who is helping oversee the battle against the 78,800-acre CZU Lightning Complex Fire southwest of San Jose, in San Mateo and Santa Cruz counties.

“We are steadily getting a trickle of resources in, and putting them to work,” Brunton said.

Several wildfire evacuation orders and warnings were being lifted in Northern California Tuesday. Sonoma County is allowing many residents to return home, and some evacuations in Napa County were being reduced to warnings, Cal Fire said. All warnings for Santa Clara County were lifted.

This is not hard. Claim to be a BLM/Antifa/Democrat “protester” and all charges will be dismissed. The pattern is clear.

Looks like we need to make an example so this crap stops. Apparently the source can’t or won’t stop it so maybe its time the rest of us took action there.

Once again: Let homeowners and utilities properly clear brush around their property and this wouldn’t be such a problem! It is possible to both protect the environment and let people manage their own property California!

As for the looters: Stands with the sheriff: no empathy for these scum! And if one of them, or more, lose their lives burning to death trying to steal other peoples property well they got what they deserved.

Law enforcement should clearly notify the public that looters and arsonists will be shot on site. The problem ends

Criminals should be a little more careful about attacking people like firefighters who not only have a bunch of hefty friends, but vast swaths of rarely explored forestland and shovels.

When did that stop being the norm, and why?

Wildfires and looting will continue with Democrats in control. Both problems are “evidence” of climate change and social injustice say they. Their obvious solution is to implement a Marxist Utopia that is under their brutal control. Rule of law and intelligent management of the environment are evil Capitalist repressive privileged solutions. Or something. The voters can change this so “vote by mail” is needed to keep the Revolution alive.

“Sheriff Jim Hart said Sunday. More are expected as the public reports “a lot of looting going on,” he said.”

Well thank you Sheriff! Nice to have an eyewitness giving us the blow-by-blow! So what are you guys doing about it?

Why is this only a problem in California?

Because it’s the only place (right now) where the wildfires aren’t in unoccupied wilderness?

This is exactly why I will not evacuate.

Forced evac plays right into the criminals’ hands. Residents forced out, abandoning everything. LE stretched to the max, barely able to staff the check points to keep residents from going back in, leaving hundreds of acres within the zone open to theft.

Residents should be advised of the situation and when evacuation is called for they are notified that if they stay, they are on their own. No resources will be expended to save them from what turns out to be a bad decision.

If you stay you accept the risk and you take on a level of responsibility for your neighbors who leave.

“That’s the extent these people have gone,” Brunton said. “Again, this is why we’ve asked for people to evacuate.”

They tell people to evacuate to that the area is open to looters, or they tell them to evacuate to keep them safe from looters who aren’t threatening them?

With logic like this, I can see why the criminals find it so easy to get the upper hand.

Well, obviously, they’re protesting global warmening, which is causing these fires. So they should be let off and given Nobel prizes.

So far, the demonstrations have been mostly nonflammable.

I’m certainly not going to defend looters or rioters, but I’d appreciate it if someone could point me to the section in California’s Penal Code that makes “suspicion of planning to loot” a crime that justifies arresting someone. What constitutes probable cause for that arrest? If there’s actual evidence that property has been stolen during the existence of an emergency or mandatory evacuation order, that’s a completely different matter, but “suspicion of planning?” Really?

A couple of counties to the north and they won’t arrest people for publicly using drugs, crapping on the sidewalk, or participating in honest-to-God riots, but in Santa Cruz County they’ll actually arrest you for “suspicion of planning.”

I hope that was bad reporting. They certainly could be arrested for “conspiracy to commit…” looting. There are specific elements to that crime.

Well, they already have a law against suspicion of planning to do something bad with your guns, so this can’t be far behind.

At least a couple of those pics appear to show a bit of meth skin.

I went to that hell hole a year or so back… they all voted for this.

governor and prosecutor will let them go in two days. They are repeat criminals.

Shoot looters on site, leave the carcasses as a warning.

Dollars to Donuts there is not a US citizen among them.