BLM Riots Could Cost Insurance Companies Up to $2 Billion

BLM Riots Could Cost Insurance Companies Up to $2 Billion

Riots are still happening, which means “the losses could be significantly more.” 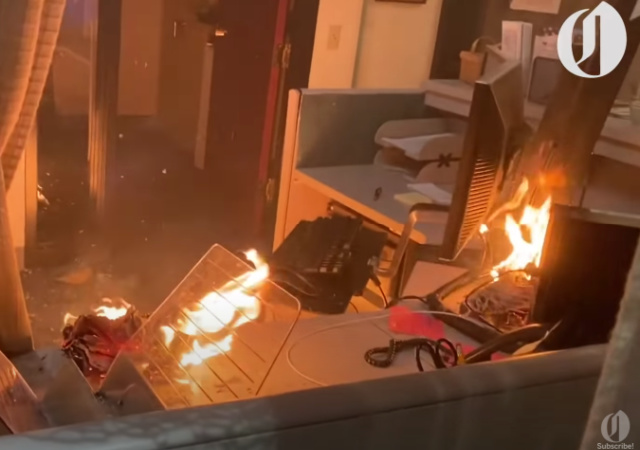 Since the death of George Floyd in late May, riots have plagued major cities across the country.

The vandalism, looting, and damage caused could cost insurance companies up to $2 billion. 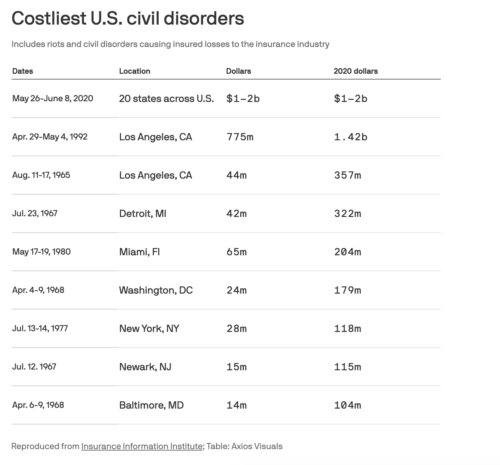 Between the lines: PCS, a unit of Verisk Analytics, won’t reveal an exact dollar figure from this year’s violence because it wants to sell that data to clients. But it says the insured losses far outstrip the prior record of $775 million from the 1992 Rodney King demonstrations.

Loretta L. Worters of Triple-I told Axios the riots “are also different because they are so widespread.”

Plus, riots are ongoing, which means “the losses could be significantly more.”

Worters explained to The New York Post that losses “while severe, would not have [an] impact on the financial stability of the industry.” Hurricanes and the wildfires “could have a considerable impact on the insurance industry.”

Who knows when it will stop. Johansmeyer also noted that insurance companies have started to prepare for any unrest after the presidential election.

Be prepared for rate increases. We all will share in the expense.
.

And it is likely many will loose coverage.

That’s right, it doesn’t “cost” the insurance companies, it ultimately “costs” the premium payers (you and me).

And to UserP’s point, the people it will “cost” the most are those who lose coverage altogether, and most of them will be “people of color” who live and own businesses in the areas being ravaged by these “mostly peaceful protests.”

But hey, “black lives matter” huh? What a load of bullshit.

The insurance companies won’t lose a dime – we’ll wind up paying for it in rate increases and the burden of self-insurance.

Being insurers won’t issue policies for riots, businesses won’t reopen in riot zones: or they’ll build fortresses for stores. But then, there is a trend of rioting while the stores are open.

We have to regain control of our society. Start rounding up the funders: billionaires that belong in prison for sedition.

re: fortresses: I read yesterday that the City of Minneapolis is not allowing business owners to install roll-down security shutters. It creates an atmosphere of “blight” and creates the impression the area is “not safe” they say! Surely the irony can’t be lost on them, can it?

Voters get the government they deserve. Maybe some people in Minneapolis will stop voting for these progressive idiots. If they don’t, it’s another city that will circle the drain for decades to come like Baltimore, Detroit et al.

Simple enough, then–don’t build or rebuild in Minneapolis. Move the economic activity, jobs, and tax base elsewhere and let the city rot.

They will raise rates, restrict coverage, and weasel on paying most claims.

I have had commercial insurance in the past, unless you paid for the civil disturbance rider you are not covered for riots.

“…could cost insurance companies up to $2 billion.”

No, it WILL cost US, the ratepayers, $2 billion or more.

Actually, since most insurance policies carry a rider that specifically exempts acts of G-d, riot or insurrection, they will likely skate out of having to pay a dime.

If I’m an insurance conglomerate, I’m suing the cities for failing to provide any protection and looking the other way. These companies pay federal, state, and local taxes for a reason.

Send teh bill to
George Soros
co The tides foundation.

Better yet: send a SWAT team to arrest him.

I read some time back that INTERPOL was holding European Arrest Warrants for Soros. Why can’t they find him? They found Bin Laden but not Soros! Beats me!

The Tides Foundation (tax exempt) is BLM’s fiscal sponsor and BLM is campaigning openly against President Trump. My understanding (not legal advice) is that that violates IRS regulations for which a Form 13909 complaint can and should be filed.

Bring lawfare to them.

I agree with the earlier comments and think the title of this piece needs refinement. Insurance companies will pass on any increased insured losses – if their reserves allow them to survive – by increasing premiums going forwarded, as is their right. Some carriers will gouge their customers, others will grow their businesses by pricing the risks fairly. That is how free market competition works.

Both the premiums and the customers’ willingness to pay those rates will reflect the perceived risk of continued losses.

To bring the rates back down, it will be necessary to finally break the Soros-funded #Resistance which has led to the destructive riots, the Covid19 lockdowns, and (arguably) the west coast wildfires.

I run a small agency. Here’s what I see happening.

A lot of businesses won’t see the impact until renewal. So that could be as far out as March depending on the timeline of their policies.

The non renewals will be incredible. Carriers will either pull out of markets or decide they aren’t taking risks for retail/contractual obligation. This will be painful to mainstreet.

The carriers who stay will be forced to raise their premiums- and if you don’t know how that works, its often the state insurance commisioner’s office who forces that—though they buy the analysis from people who know finances.

Here in Wa, our DIPSHIT insurance commissioner who is Jay Inslee’s little bitch is having a summit on Climate Change in response to this year’s events.

I am a CPA here in Dallas. I have a few clients that own smaller commercial buildings within 3 miles of downtown. They are stating that they cant get quotes for coverage.

Remember, Dallas shut down the riots within 36 hours vs dem cities lasting 100plus days.

I’ve been seeing moratoriums for Seattle and Portland for riots, though I don’t write in those cities- right now I’m seeing other areas in the NW locked out due to fire.

Those ‘Riders’ they talk about will balloon out to ridiculous amounts just like ‘Flood Insurance’ in flood prone areas and small business will simply not get insurance due to the cost. Decentralize the business to smaller peaceful towns in the nearby rural areas might be their only chance. The city will lose out!

This is exactly what the democrat party wants, on an even larger scale.

probably not possible but if it were, would like to be present when karma presents the tab to soros, or better still, present the tab myself

I’m surprised insurance covers it. An exemption for civil insurrection ought to be standard, because it’s not an insurable event. All your policies go bad at the same time, like flood insurance.

BLM is the biggest scam ever pulled on the American public. OAN has a video of policemen killed inline of duty this year.
https://youtu.be/wCoT332ssjw
Many black police officers

The title of the article should read:

“BLM Riots Could Cost Insurance Policy HOLDERS Up to $2 Billion”

Does anyone here deal with insurance in Portland, Minneapolis, Chicago, or New York? Are any insurance companies still willing to write policies there, even at double the rates?

When people in cities, especially black people, find that they can no longer get insurance, they will be screaming racism.

The insurance industry is one of the biggest legal scams ever invented.

So you propose people buy buildings with anywhere from half a million to tens of millions of dollars in debt and no mechanism to pay that debt if the building burns down?

This “scam” allows you to have a roof over your head.

I propose that people live within their means. They were building houses, mansions and office buildings before anybody dreamed up this shell game. The simple fact that the insurance companies extract tens of billions of dollars for themselves while paying out pennies for claims only proves it’s a shell game.

So drop *_all_* your coverages. Good luck with getting a mortgage or renewing the registration for your car(s).

Conspiracy theories can be fun until they affect the person indulging in them.
.

That’s just the cost to insurance companies, which is only a small fraction of the damage suffered by the businesses.

In Minneapolis, with all the arson on top of the looting, owners are find out out that the estimates just to clear the wreckage is 10x what the insurance companies are paying. Then, they’d have to rebuild and restock. And even then: rioting continues, and the city doesn’t allow steel shutters.

And, on top of all that, is all the lost revenue from being out of business all summer long.

Easy. Don’t pay. Then the communities will die off.

Major American Cities are full of “Ghetto’s” which have shuttered stores and houses and feces in the streets that nobody wants to go near. Ask Queen Pelosi – her little dung hill is a classic example.
When whole swathes of the cities look like downtown Mogadishu, the residents will kick the communists out on their butts! (Maybe)

Tell me what you think about places like Seattle where the Mayor makes the Police stand-down.
The Insurance Companies offered premiums understanding there was a Police force and the place was not an active War Zone…