“I have taken up space as a Black person while knowing I am white. I have used Blackness when it was not mine to use” 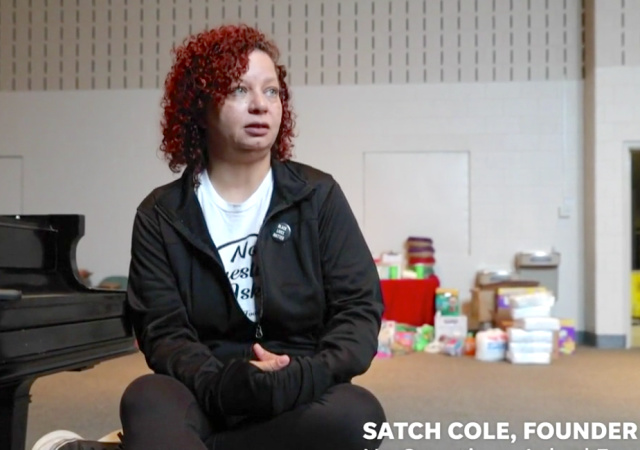 Apparently there are a lot of white, to date only, women running around claiming to be black.  This particular manifestation of racial fraud became well-known with Rachel Dolezal, but since then, we keep hearing from white women admitting that they’ve scammed “the system” by pretending to be/identifying as black.

The latest example comes from Indianapolis where a white woman claimed to be black and worked as a community organizer with Black Lives Matter. She admitted her fakery after she was outed on BlackIndyLive.com.

Satchuel Cole (they/them), born Jennifer Lynn Benton, is a prominent & highly respected BLM activist in Indiana. They have been exposed for pretending to be black. https://t.co/xnVfMbqDPZ pic.twitter.com/NS4A8swZNP

Satchuel Cole, a highly visible community leader advocating for racial and social justice in Indiana, has apologized for misleading people about Cole’s own race, saying “I have taken up space as a Black person while knowing I am white.”

Cole — who uses pronouns they/them — worked with Indy10 Black Lives Matter and Indy SURJ, apologized and admitted lying in a social media post. Cole, who also was active in the LGBTQ community, did not respond to multiple phone messages and emails from IndyStar this week.

“Friends, I need to take accountability for my actions and the harm that I have done. My deception and lies have hurt those I care most about. I have taken up space as a Black person while knowing I am white. I have used Blackness when it was not mine to use. I have asked for support and energy as a Black person. I have caused harm to the city, friends and the work that I held so dear,” Cole posted on a Facebook page under the name Satch Paige.

. . . . Cole’s admission and apology came a day after an expose about Cole’s family and race was published on the website BlackIndyLIVE.com. Laron Anderson, the website’s editor-in-chief, said it was the culmination of long-standing questions he and others had about whether Cole really was Black. Cole had based their racial identity, Anderson said, on a claim that their father was Black.

The IndyStar has a lot more about her activities as a “black” woman, so click over if you are interested.

I realize that might be cumbersome but if ‘they/them’ insist that others use a plural to identify an individual then shouldn’t the same cumbersome language be utilized by the ‘they/them’ as an expression of commitment to their preferences?

Additionally, if an individual believes ‘they/them’ is their appropriate reference, shouldn’t ‘they/them’ be under highly attentive care of a mental health professional until it can be determined which one of ‘they/them’ said individual actually is??

This is what racism looks like in 2020…so few actual racists that white people are stepping up to act racist. Reminds me of Jussie…

Another ugly, stupid, useless person. Some people draw the short straw in every category.

Iowahawk comments on The Twit:
What does this make now, 4? These chicks should all get together and start a singing group called the White Supremes
[h/t Insty]
(https://twitter.com/iowahawkblog/status/1307091298965487618)

Sorry to be a “spelling Karen,” but it’s “Berry Gordy.”

None of these women are smart enough, or have any skill where they could be Supreme.

Now if only the “transgender” frauds would start outing themselves.

This will “learn” all those honkies.

The Friendly Grizzly in reply to notamemberofanyorganizedpolicital. | September 21, 2020 at 2:31 pm

All THEM hankies. Xo it right! /s

Yet another comedy prophecy come true! And not even from the Babylon Bee!

Since race, gender, sex don’t matter, then how can you be a white racist since that class of people do not exist anymore.

BTW, I am hearing “if you were sexual assaulted when in boy scouts and would like to file a claim, even with out proof, call this number” on the radio. “without proof”! Wow, another money grab.

The story about the Boy Scouts will be interesting. Unless this is a case of a white heterosexual male sexually molesting a female Boy Scout (I suppose it is possible) the Joseph Goebbels media probably won’t touch it with a ten-foot pole.

In the reporting on the Catholic Church scandal about the priests who were accused of molesting children, the Joseph Goebbels media almost always featured a female victim. Male victims were rarely shown on TV or written about in newspapers and magazines. I think the idea that some homosexuals could prey on children did not fit the official Communist Narrative of “all gays are victims”.

Don’t you just love the ethics of this part of the law profession!

Is it any wonder that a person like this, who is confused about her gender, is confused about her race? Or is her gender identification another ruse to move her closer to the social justice “action” as her race fakery moved her with respect to the BLM movement? Just being a progressive puts her into a category of people who desire power and authority. Race fakery could simply be a manifestation of that desire.

It’s a need to be “somebody”. She needs the attention you only get from claiming moral virtue and crusading for your religion.
So she “appropriated” it.

munchausen by black_proxy…
outing themselves to purposely cause distress upon themselves by forcing attn onto them.

Interesting take. It appears that these “them/theys love self flagellation. Poor them/they.

yeah its something else alright.
munchausen by blackness would somewhat fit, using identifying as black to gain attn then outing yourself to cause self inflicted harm.
But….always a but.
this “supposedly” also hurts the black community (yeah whatever….but go with it for sake this discussion) so the munchausen by black_proxy sort of fits also like when a child/other person hurt in a munchausen by proxy “normal” scenario.

really both terms fit.
easier to say crazy as shit but labeling it may give ammo. who knows.

Given that they join the fray out of that need for attention, it’s very possible that they give it one last go on the way out the door, to extend their attention for one extra minute.

I can tell from looking at her that she is absolutely, 100%, bat-shit crazy as a shit-house rat. Does anybody take loons like this seriously?

I suspect that the actual black activists figured these people out almost immediately. All it takes is a quick conversation about hair products, and you know if someone grew up with afro textured hair. From there it’s just a matter of seeing if they can keep which of their great-grandparents was black straight. I suspect the leaders appreciated her help, the money she brought in, and only outed her after her behavior became completely unbearable.

She will run for Senator of Massachusetts.

“I have taken up space as a Black person while knowing I am white. I have used Blackness when it was not mine to use”

How about “I have taken up space” and leave it at that.

I must give this sadsack Millenial/ GenZ they/them some credit for possibly knowing who Satchel Paige was. History is not this groups strong suit.
I love her creativity with ,”Satchuel”,

But how can you “use blackness” if only white people have privilege?

notamemberofanyorganizedpolicital in reply to Chewbacca. | September 21, 2020 at 6:40 pm

Shouldn’t it be: Satch Cole, Flounder?