One of the suspects filmed himself calling the incident into police; it did not end well for him. 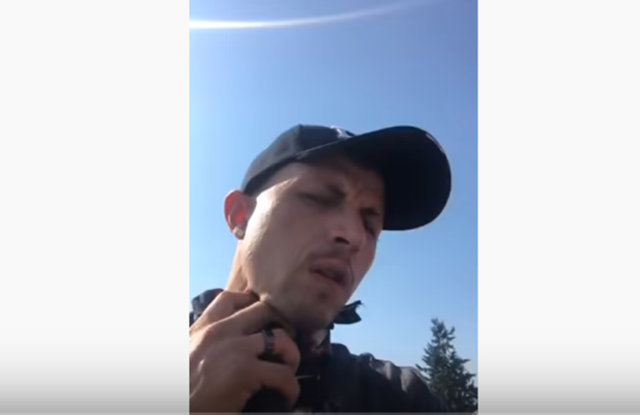 Wildfires have now claimed the lives of at least 15 people across California, Oregon, and Washington as wildfires continue to rage in all three states.

Arson investigations have been launched in two separate wildfire incidents in all three states.

In the first case, arson investigators are looking into the suspicious origins of a deadly Oregon wildfire that began in the town of Ashland and destroyed hundreds of homes and killed two people.

The remains of two victims have been found in ruins from the blaze, which erupted on Tuesday and roared through a third day in the midst of a spate of wildfires across Oregon, according to a spokesman for the state fire marshal.

More bodies are expected to be discovered as search teams comb through the wreckage of dwellings that were engulfed during a chaotic evacuation of populated areas along the path of the swiftly spreading flames, Ashland police chief Tighe O’Meara said.

“We tried to get people out as fast as we could,”[Ashland Police Chief Tighe] O’Meara told Reuters by phone. “Chances are there are going to be bodies in some of those homes. The likelihood of much larger (fatality) numbers is significant.”

Police Chief O’Mara indicated there were “good reasons” for the blaze to be investigated as arson.

Investigators are also looking into a body that was found near the origin of the fire as part of the criminal investigation, KDRV-TV in Medford reported. Officials have not elaborated.

In a second incident, one man has been arrested for starting a blaze in Phoenix,Oregon.

A man is in custody, charged with two counts of arson and numerous other charges after allegedly starting a fire in Phoenix the night the Almeda Fire was raging.

The Jackson County Sheriff’s Office said that deputies responded to the 1100-block of Quail Lane just after 5 p.m. on Tuesday night, to an area off Barnum drive between Highway 99 and the railroad tracks. The 911 caller reported seeing a man igniting a fire behind their home on Quail Lane.

“Due to the impending fire, the witnesses had to flee their home and could not be interviewed immediately,” the Sheriff’s Office said.

In a third suspected arson case farther up north, one man may have incriminated himself in the start of a Washington state blaze via social media.

A man with the exact same name as the one police arrested recorded a Facebook live of that fire saying he reported it to first responders.

Puyallup police told KIRO7 News they were made aware of the Facebook live — which showed his interaction with officers — after the arrest.

A man with the exact same name as the one police arrested recorded a Facebook live of that fire saying he reported it to first responders.

Puyallup police told KIRO7 News they were made aware of the Facebook live — which showed his interaction with officers — after the arrest.

Here is the video posted on Facebook. The man had earlier attended a BLM “protest” he had also filmed.

In the fourth case, Washington troopers quickly followed up with a second arrest.

Troopers said someone saw a man setting fire to grass with a match near State Route 512 and State Route 7 and called police. Troopers arrived at the scene, chased the man, and took him into custody.

Thursday’s arrest comes one day after a 36-year-old Puyallup man was arrested for allegedly starting a large brushfire which temporarily shut down state Route 167 and several ramps near Meridian Avenue.

We got another one! Great job Trooper Morefield. A pedestrian decided to match light the grass at SR-512 and SR-7. Citizen observed and alerted 911. After a short foot chase, one is in custody and on his way to jail. #Justice #Beatrooper @CentralPierce pic.twitter.com/ePJMHU4tUd

Meanwhile, in California, A 55-year-old transient was arrested Monday evening on suspicion of multiple counts of arson in Marin County.

Officers joined the Novato Fire Protection District in responding to a report of a tree on fire in the 1500 block of Novato Boulevard. Another fire was discovered in the area of Diablo Avenue and Novato Boulevard, which officers attended to using fire extinguishers from their vehicles, police officials said.

As fire crews worked to contain both fires, officers searched the area and located a suspect lighting a fire on Front Street. Officers detained the suspect, identified as John Davies. Fire crews responded to a third fire, and successfully contained and extinguished all three fires. No structures were damaged and no one was injured.

I find it interesting that in January of this year, Australian authorities arrested 24 people in connection with that nation’s massive wildfires. While a combination of poor land management decisions, urban sprawl, and drought are the leading causes of the historic Western blazes, Americans should be concerned about the number of arsons identified and the motivation of any convicted of these crimes.

We go through the same thing every year and eventually, it is reported that the great majority are man-make by either negligence or outright arson (most of them IMO).

But Mother Earth made them do it to protest global warmening!

notamemberofanyorganizedpolicital in reply to henrybowman. | September 13, 2020 at 2:41 am

THIS is the CREEPIEST video I have ever seen! Governor Newsom
@GavinNewsom
is smiling like a PSYCHOPATH while speaking on the California Wildfires. #ArsonExposed

No better confirmation possible no?

Pettifogger in reply to notamemberofanyorganizedpolicital. | September 12, 2020 at 12:18 pm

I yield to none in my disdain of Antifa and BLM specifically and the Antifada generally, but these reports do not seem to support blaming them for the fires. They are not the source of ALL evil in the world.

“Common things happen commonly”. In any list Antifa, BLM, Islamists are right up there along with pyromaniacs. Want to nudge the climate change agenda? Add Greenies.

Antifa = Greenies = BLM = Marxists = Nazis
All evil, no other distinctions are relevant.

notamemberofanyorganizedpolicital in reply to alaskabob. | September 12, 2020 at 1:22 pm

Are we to believe all the cities burning since May were torched by Republicans?

From the very first line of this article:

“One of the suspects filmed himself calling the incident
into police; it did not end well for him.”

CorkyAgain in reply to notamemberofanyorganizedpolicital. | September 12, 2020 at 6:38 pm

The deputy sheriff in that video has been put on administrative leave while the sheriff’s office investigates his “potential violation of policy.”

I’m not sure what exactly needs to be “investigated” here. What policy was potentially violated? Letting the public know things they shouldn’t be allowed to know?

Or is the “investigation” to decide what punishment they think they can get away with imposing on this deputy for speaking out of turn?

snopercod in reply to notamemberofanyorganizedpolicital. | September 12, 2020 at 1:57 pm

Many of these started on 9/11. Coincidence?

The wa fires were before 9/11. News is finally making it out of the local outlets.

But wait, I thought Gaia was angry at us and started these fires as a warning.

Her Choice? Yes. However, it’s probably premature to anthropomorphize the 3rd Rock, and to impute an em-pathetic reaction.

Giai moves in ysterious ways, and apparently through homeless disciples.

In Wa, BECAUSE not all of the arsonists are associated with antifa, they are trying to quash the rumors that this has been their doing.

Many were arson, but they won’t catch who dunnit. Many of the local fires in Wa were homeless as well (some just flipping a cig in dry grass), which has been happening big time.

I’m not above understanding that many people are off their rocker and doing sick stuff, especially THIS year, but the BLM/Antifa link is strong in a lot of these fires.

Hwy 167 intersects Hwy 512 at Puyallup in Pierce Co. It a bit north of Lacey WA where law enforcement shot that dirt bag BLM/Antifa murderer of the Patriot Prayer member. Quite a mix of folks down that way. Olympia, Evergreen, and Joint Base Lewis McChord (JBLM).

Drove a friend down to Lacey a few weeks ago to pick up a new ATV and while at Olympic Motorsports, a couple ZZ Top looking guys came in wearing masks, the big one in black with white letters “F*CK INSLEE”. Hadda larf at that – portly me at 65 and hardly looking like the biker type in my polo shirt and loafers together with my comparatively diminutive neighbor and friend.

Normally we have a view across the Strait of Juan de Fuca to the San Juan and Gulf Islands – even to Whistler mt. in BC. Today the sky is thick with smoke – yellow – and can’t see beyond our neighbor’s house below – about 300′. Air quality is rated “very unhealthy” right now. No rain in the forecast until Wed for the north Olympic peninsula.