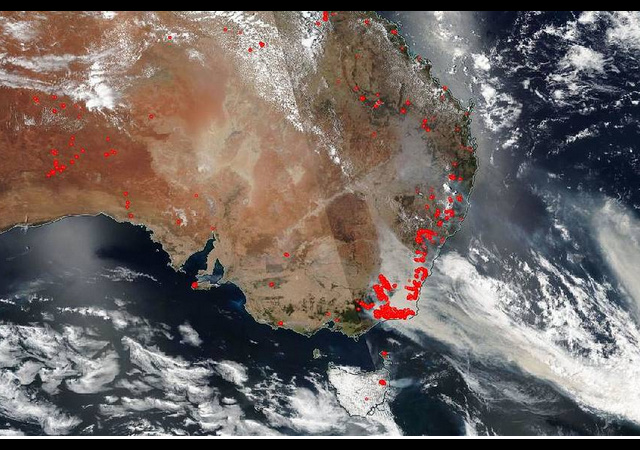 Last week I noted that the apocalyptic wildfires burning in Australia were due, in part, to several arsonists who intentionally ignited the desiccated land.

Fortunately, my sister-in-law and her family have safely returned to their home in Bega. The fires are already burned 10.2 million hectares (25.2 million acres) and have claimed 27 lives. However, it looks like there will be just a little respite from the high fire danger in the near future.

A cold front is currently moving across the south-eastern parts of the country and will continue to track across Victoria and New South Wales (NSW) during today 11 January. The south-westerly wind change behind the cold front will be gusty, particularly around the fire affected areas.

According to the EU Joint Research Centre’s Global Wildfire Information System (GWIS), the fire danger forecast, although temporarily slightly improved, will remain considerably high to extreme across eastern Australia from 11-12 January and up to 15 January. The fire danger will improve in South Western Australia and will be medium to high, especially in the coastline where a large number of active fires is still present.

Australian authorities have now charged 24 people with arson in connection with some of the blazes that contributed to this disaster.

Police have charged at least 24 people for intentionally starting bushfires in the state of New South Wales, according to a statement the New South Wales Police released Monday.

NSW Police have taken legal action against 183 people, 40 of whom are juveniles, for fire-related offenses since November 8, the statement said. The legal actions range from cautions to criminal charges.

Out of those 183 people, 53 have received cautions or criminal charges for failing to comply with a total fire ban and 47 are accused of discarding a lit cigarette or match on land, according to the police statement.

However, in their efforts to minimize the role that these crimes played in the wildfires (and refocus attention on “climate crisis causes), the mainstream media is promoting the idea that these numbers are #FakeNews:

The hashtag #ArsonEmergency began trending shortly after the new year. Queensland University of Technology researcher Timothy Graham says he identified troll and bot social media accounts that tried to shift the narrative about the fires as being the work of dozens of criminals.

“We studied about 300 Twitter accounts driving the #ArsonEmergency hashtag to identify inauthentic behavior,” Graham said Friday in an essay for The Conversation, which he co-wrote with fellow researcher Tobias Keller.

“We found many accounts using #ArsonEmergency were behaving ‘suspiciously,’ compared to those using #AustraliaFire and #BushfireAustralia,” they said. “Accounts peddling #ArsonEmergency carried out activity similar to what we’ve witnessed in past disinformation campaigns, such as the coordinated behavior of Russian trolls during the 2016 US presidential election.”

So, every story the press doesn’t like comes now comes from Russian trolls!

Some Australians are now promoting controlled burns in the future, similar to the practices attributed to the aboriginal peoples.

For thousands of years, the Indigenous people of Australia set fire to the land.

Long before Australia was invaded and colonised by Europeans, fire management techniques – known as “cultural burns” – were being practised.

The cool-burning, knee-high blazes were designed to happen continuously and across the landscape.

The fires burn up fuel like kindling and leaf detritus, meaning a natural bushfire has less to devour.

Since Australia’s fire crisis began last year, calls for better reintegration of this technique have grown louder. But it should have happened sooner, argues one Aboriginal knowledge expert.

I sure hope social justice warriors don’t nix these management practices because of “cultural appropriation.” Then again, the Australians could take the #ExtinctionRebellion approach:

I’m waiting for the media to explain that their acts of arson was caused by “climate change psychosis”.

Or workplace violence, because Trump . . .

This isnt the first time this enviro-whackos didn’t think nature was working fast enough and took it into their own hands.

And in other news, Al Goreis plotting to go polar bear hunting, because their population growth is making him look stupid…

There have been 183 people arrested or charged with lighting fires nationally – and police fear that figure will climb. .. Muslim Teen: Fadi Zraika (and brother) starting fires in Australia laughs as the migrant leaves court… Arrested yes, but many of them are now free to start new fires..

Catch and release is bad for future victims.

Apparently, back in the early 70’s (the peak of Global Cooling) they had a burn about 4X the size of this year.

A local news station (WFAA in DFW) did a story on it last night and interviewed David Dessler at Texas A&M – a fairly famous GW scientist activist. Of course he and the reporter blamed the fires on global warming/climate change. No mention of arsonists or land management practices possibly contributing to the fires. Very frustrating.

Facebook disappeared one of my posts that linked an editorial on the subject. Snopes said it was “fake news” because arsonists hadn’t set the fires, they were due to global warming. I remember the one I linked to was in a New Zealand or Australian paper, but this link to a Canadian one is the same editorial: https://canadafreepress.com/article/put-foresters-back-in-the-forests

Another reason Facebook should be treated as a common carrier or be held responsible for anything anyone posts. Can’t have it both ways…

Another reason Facebook should be treated as a common carrier or be held responsible for anything anyone posts. Can’t have it both ways…

This is nonsense. Those are not the only two options. Section 230 of the CDA specifically created a third category, “interactive computer service”, which can remove user-contributed material without thereby becoming responsible for content they have not removed. Without that section sites that depend on user-contributed content such as this very forum on which we are discussing it would not be able to exist. You are demanding the repeal of that law, which means you are demanding the closure of this forum. Is that really what you want?

The Global Warmenists are not claiming GW started the fires, they’re claiming it created the conditions in which the fires were able to spread so far and do so much damage. In a cooler and wetter year they would have been put out much sooner and easier, or have gone out on their own. And that is true, except that there’s no good evidence that GW or “climate change” is responsible. Yes, this is one of the hottest and driest years on record, which is why the fires have been so bad this year; but the summer of 1938-39 was hotter and drier, and the fires were accordingly worse, and the same is probably true of the summer of 1891-92, although the records from then are not good enough for us to say for sure.