The lie that there was a police shooting death of a black man traveled halfway around Minneapolis before the truth could get out that the man committed suicide. 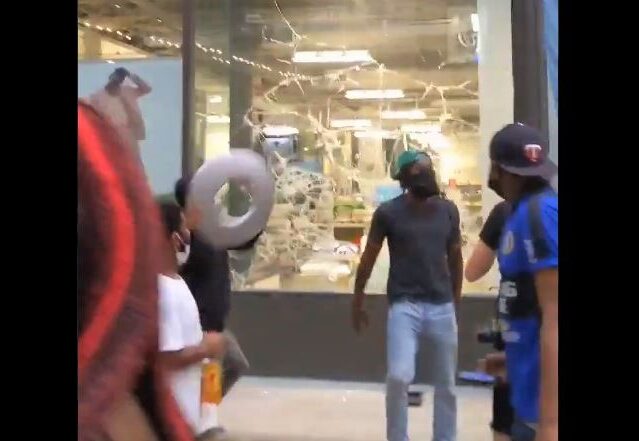 A curious thing happened yesterday in Minneapolis. Rioting and looting is old school (circa May 2020) at this point, so that wasn’t curious.

What was curious was that the rioting and looting was based on a demonstrably false claim that police shot dead a black man. In fact, as video quickly released by police showed, the man in question — for whom there was an arrest warrant –committed suicide as police approached. The police never fired a shot.

But the lie that this was a police shooting of a black man traveled halfway around Minneapolis before the truth could get out. The result was the type of rioting and looting we have seen in dozens of cities and towns around the country in the name of the Black Lives Matter movement.

Looting and violence has erupted in Minneapolis after a man shot himself as police approached him. How is this the fault of the police? pic.twitter.com/hkvYlMIIqv

Looting in downtown Minneapolis. Haskell’s liquor store and Medical Arts building included. This is all linked to alleged suicide of suspect in earlier homicide. Crowds down here were convinced he was shot by police. pic.twitter.com/zaIKUw8IlC

Rioting and looting before the facts are known is not new. We saw it after the Trayvon Martin and Michael Brown shootings, where false narratives were spun for an activist agenda, though the hard evidence later showed that these were lawful self defense (Martin) and use of force (Brown).

In some cases, the immediate reaction proves correct, in many cases either incorrect or at least questionable. But no matter to the rioters and looters, and the people instigating the violence. Facts don’t matter to them.

Yet more proof that this is an insurrection against the US government, not a protest. Any excuse will do to keep burning down the house and looting.

These people don’t give a crap about anything or anyone, other than themselves and a chance to enrich themselves off the backs of others. They know the local government is a joke, no consequences will come from their actions, and so the government they want to overthrow has capitulated to this mob.

The rioters need to be declared terrorists, along with Antifa. Every one of them need to be investigated right down to every single dime of their income and trace that back to the funding sources. Those funding this should be arrested for funding terrorism and an insurrection.

I am all in for investigations of those caught after their dirty deeds, but I really think that those caught in the act should die then.

notamemberofanyorganizedpolicital in reply to JusticeDelivered. | August 27, 2020 at 9:40 pm

I’m convinced lots of the DEMS funding for this is from illegal drugs and sex trafficking.

“The U.S. Marshals Service (USMS) held a press conference today to announce the successful rescue and location of 39 children from sex trafficking rings…”

Real quick people in the area are going to figure out that they can’t live around a population of people who act that way at the drop of a hat. One side or the other has got to leave.

THis will be just like the last exodus which started in the early sixties. All those poor ghetto dwellers will pick up a bunch of nice housing for a fraction of its original value. There will be a staggering transfer of wealth.

I am really tired of these shakedown artists.

It won’t be a transfer of wealth; it’s a destruction of wealth. Those gentrified neighborhoods will be slums again for decades, maybe forever.

For the people who need to move, it is destruction of their wealth. I remember clearly when my parents lost all of their equity, about 15 years worth. What happens to neighborhoods in this situation is not about their an the property’s age, it is all about the nature a wave of rift raff which descends upon the neighborhood.

In fact, it was intentional, where one family, called blockbusters would move in, and intentionally act in a manner to get the rest of the neighbors to sell cheap.

It was a huge, intentional scam, very much like quite a few other scams being conducted today.

notamemberofanyorganizedpolicital in reply to JusticeDelivered. | August 27, 2020 at 11:46 pm

Then the real estate agencies were in on the scam too.

The Narrative was correct but the facts were wrong. So naturally the Narrative takes precedence.

I’m sure all those people looting the Target just wanted food for their starving children. That’s why they ignored the groceries and headed for the electronics.

This is one of those rare times I am on the side of the crooks. Target is one of the more-commie-than-thou super-woke corporations who donated heavily to BLM. So they were paying the brownshirts to rob them.

Think of it as repetitions paid by those who are promoting slavery, bloodshed and genocide. Loot, Baby, Loot!

notamemberofanyorganizedpolicital in reply to Recovering Lutheran. | August 27, 2020 at 11:50 pm

But no matter to the rioters and looters, and the people instigating the violence. Facts don’t matter to them.

How long till they don’t even need a false trigger.

“Hey, they won’t do anything to stop us, let’s go loot some stores in the mall. I need some new shoes!”

“How long till they don’t even need a false trigger.”

Look at their normal crime rate, over sevenfold. Looting comes naturally. Entitlement is ingrained in culture.

So these scumbags are supposed to ask questions THEN riot?

We all know they’re in it for the money: many of the rioters are paid by the hour, and those not on the payroll are on the grab-what-you-can plan.

They really should be shot down like the rabid dogs they are.

“So these scumbags are supposed to ask questions THEN riot?”

Exactly. Whether used as a reason or excuse or trigger or whatever, facts or lies are irrelevant to criminal acts. Facts matter in logic and rule of law but we have neither in this insurrection and criminal rampage.

Evil is “triggered” by the existence of the good.

To consider whether their “trigger” (or “reason”) is a fact or a lie is to accept the rhetoric of a criminal and to give him cover.

I’m surprised they found anything worth looting in Target. All cheap junk.

That’s why they have to con….er, hype it with things like Oprah………

Give credit where it’s due. Around here Target is the only retailer with fire extinguishers worth having in the house. Everybody else—Lowes, Home Depot, the hardware store chains—have the crapola ones which should void your home insurance if anyone was paying attention. Walmart sometimes has decent ones, sometimes not. I get much better ones from the dreaded Amazon, but Target’s would do.

What did he know about the clintons?

No worries. It fit the narrative, and that is premier.

The rest of us are just a bunch of racists.

this has been the SOP of the left since the 1960s

The Trayvon martyrdom hoax (Dhimmi-crats canonizing a belligerent and violent criminal who brutally assaulted and attempted to murder George Zimmerman), and, the Michael Brown martyrdom hoax (Dhimmi-crats canonizing a belligerent criminal sociopath who assaulted and attempted to murder a police officer) represented the plainest demonstration that the vile Dhimmi-crats don’t care about facts, legal standards or truth — they have poisonous, contrived and fallacious narratives of alleged “pervasive” and “institutionalized” racism to peddle, and, damned if they let such quaint notions as inconvenient and contradictory “facts” and “law” get in the way of that mission.

Zimmerman’s case was the first cancel operations I was aware of.

It was a huge mistake allowing it to flourish. It was a scam, an insurance shakedown. It, and what is going on now is both civil and criminal RICO actionable.

Leaders need to be held accountable, including Chump esquire, who in my opinion has much in common with Avenatti.

The triggering event is unimportant. We know this because exactly the same thing can happen after relatively routine events like power outages. Remember NYC in the mid-1970s? Widespread looting even though no police outrages, real or imaginary, were involved; just a power failure.

So mollifying this particular population will never be successful, since anything and everything can set it off on one of its periodic sprees. It’s not a political or technical problem, it’s a law-enforcement problem. No political “progress” can have any real effect.

BLM instantly cries “racist murder” every time police shoot a black thug, so it’s no surprise they’d do the same in this case too.

How long before the vile Dhimmi-crats and “Black Lives Matter” radical-jackboots declare that the death of any black person, regardless of causation, is the fault of the police?

It’s a good day for redistributive change per chance to break things and intimidate people.

While watching hurricane damage in the Caribbean, I noticed that looters, I mean undocumented shoppers, were taking flat screen televisions. I could empathize with them because I know in the mist of a major emergency where water, food and electricity are nonexistent, I always look for a flat screen.

I can only assume that Blacks in America in the existential fight for their lives, will be doing the same thing, or perhaps some furs or cellphones, but you gotsa have some Air Jordans so you can out run the Antifa.