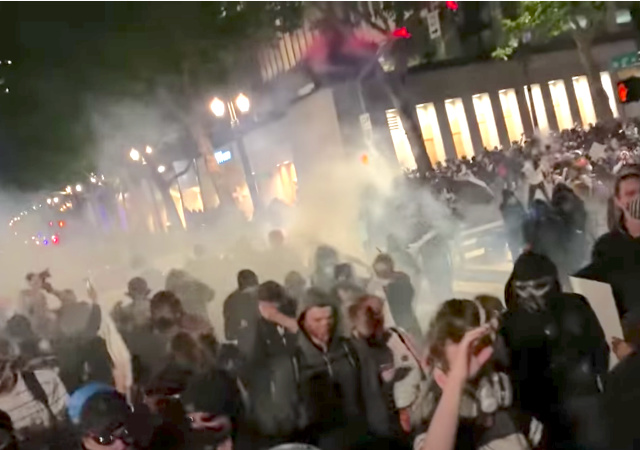 How effective has the federal agents’ tactics against the Portland anarchist mob been?

One clue that federal forces have been managing the mob it faces daily well is that the leftist protesters are now claiming that federal decontamination of properties after their antics may be polluting the municipal water system.

Oregon environmental regulators are requiring the city of Portland to test stormwater around the federal courthouse and parts of downtown, citing the “unprecedented amount of tear gas” used by local and federal law enforcement agencies since May.

The Department of Environmental Quality sent a letter Thursday to Portland’s Bureau of Environmental Quality outlining its expectations. The city must send a monitoring plan to state officials within the next three weeks describing how it will monitor for specific heavy metals and chemicals that regulators believe are likely associated with CS gas, a strong form of toxic tear gas used against protesters for months.

City officials said they are aware of the letter and are working in conjunction with the state to do more than just monitor for the roughly half dozen metals required by the state. Diane Dulken, a spokesperson for the sewer and stormwater agency, said Portland is working to “prevent the pollutants from getting into the Willamette River.” She said the agency “regularly” tests for contaminants at locations along the river but will now test specifically near the courthouse, two public parks and Justice Center due to the extensive tear gas used there.

But Portland also raised an alarm bell: It doesn’t know much about tear gas or its residue, and it said those materials are likely already in the sewer system. Dulken noted that tear gas residue is in the trees, on the ground and likely throughout the area near the courthouse and justice center, which has been the centerpiece of nightly protests for months.

“Maybe these materials aren’t hazardous, maybe they are,” Dulken said. “We’re researching that. There isn’t a lot of information.”

I would suggest that if the leftists were so worried about tear gas and the environment, they would truly assemble peaceably. However, leftists are only interested in a clean environment when it can be weaponized.

However, in 2016, when they protested against economy-enhancing pipelines that will make petroleum transportation safer while providing jobs, the progressive activists staged “Midwest Burning Man” and generated tons of garbage that was truly an environmental threat. Now, in 2020, the left has organized “Northwest Burning City.” Good job!

It is clear that there is a search for an angle to inhibit the ability of federal agents to respond with one of the most effective crowd-control tools in their arsenal.

After video surfaced of federal agents hosing contaminants off of the Mark O. Hatfield federal courthouse—where tear gas and pepper spray have been deployed—the Portland Bureau of Environmental Services said the discharge technique is “not permissible” and that the city agency is currently investigating.

NOT allowed – hosing off contaminants into the street and to storm drains,” BES wrote in a tweet responding to a video posted of agents hosing off contaminants. “There is no permit because this kind of discharge is not permissible.…We do not expect to have additional information for some time as we continue this investigation.”

The impact that chemical riot control agents like CS gas and pepper spray have on the environment are largely unknown. The city’s stormwater flows into the sewer system.

Thank you all for your video reports. There is no permit because this kind of discharge is not permissible. As we look into these incidents, here are a few general rules for preventing pollution while cleaning sidewalks and other pavement:

NOT allowed – hosing off contaminants into the street and to storm drains. Instead, pollution prevention practices must be in place:

As an added bonus, the left is also throwing in a little COVID-fear to stem the use of tear gas.

Dr. William Lambert is an environmental epidemiologist with Oregon Health and Science University and Portland State University’s School of Public Health who studies the effects of air pollution on respiratory infections. He said exposure to tear gas can promote infection and the transmission of COVID-19 in two different ways.

“It’s a double whammy effect if you will. First off, the use of a strong irritant like that, that causes coughing, sneezing, people to remove their masks because of the extreme discomfort will release aerosols into the air and to the people around them,” Lambert said.

So, if someone at a protest is infected, he said that person could infect someone else by coughing or sneezing near others as a result of being tear gassed.

If that is true, then I suggest that the “protesters” stop the types of activities necessitating the use of tear gas. These thugs are the real polluters and super-spreaders. The good news is that these reports suggest Portland’s band of “peaceful protesters” are realizing they have bitten off more than they can chew.

I would love to see the feds spray canisters of aerasolized COVID solution onto the crowd. But who am I kidding, it wouldn’t do a single thing to 99% of them.

How much longer are we going to let them throw a tantrum on the store floor?

Essentially, that is all they are doing, throwing a tantrum. It is televised, a good spin is applied and then broadcast to the masses for daily consumption

Real ammunition will put a stop to this immediately.

How do they feel about, zay.. mustard gas? Phosgene?

You are too kind. But then… a little suffering before the end is good for the soul.. if they had one. Now about Ricin… lingering a few days as the cells fall apart… so many options…

Much of the mainstream press is presenting the federal law enforcement agents in Portland as a latter-day Gestapo, and musing darkly about “maybe it can happen here.”

Yet even as lawless mobs commit political violence in the streets with seeming impunity, they apparently see no threat from de-facto rule by street thugs. Because (of course) the “protesters” are mostly peaceful, or something.

I’ve found it increasingly difficult to understand this worldview, that the threat to democratic rule somehow comes from federal agents and not from these lawless mobs.

Do they really see these mobs as “peaceful,” and if so, would they dare test the proposition by arguing with them? Do they truly not see the threats inherent in removing lawful authority from city streets?

In any case, an easy way to distinguish between protesters and lawful thugs is to take photos of them. For protesters always love cameras, for who would bother protesting in secret? It was, after all, televised videos of Bull Connor’s dogs and fire hoses, and of the ugly mobs surrounding Little Rock Central High School, that finally won the day for civil rights in the (formerly) segregated south.

A ‘peaceful protester’ will always love a camera, especially if it promises national media exposure. Just as surely as street thugs will always hate them.

I wonder what kind of pollutants are spread by …

Open Flames, Feces, n Fireworks (Colors in fireworks are metals; the propellants n explosives contain metals. Unmanaged burning of buildings releases all manner of stuff. What’s in bad-sanitation zone feces is a big list, but we know COVID19 is found in feces, even to being one method for detecting community presence of the disease.)

I am certain that Oregon state environmental enforcers are looking at these additional sources and more, as this search for health hazards is of course an honest public health exercise, not looking to ban, sue or at least smear the feds by other means. (/sarc.)

This is the same group that is convinced singing in church is a crime against humanity, yet “nuts to butts” unmasked rioting crowds raping, murdering and looting is just swell.

notamemberofanyorganizedpolicital in reply to Recovering Lutheran. | August 2, 2020 at 4:11 pm

Lockups for thee but not for DEM…..

Our screaming-D friends demonstrate ever more vigorously they are nor responsible actors, nor reliable negotiators or honest brokers.

If they agreed to it, they won’t.

If they did it, they took something while doing it.

If they made a plan, it won’t work.

If they have an approach, it’s for the appartcheks, not what it’s supposed to do.

If they have a concern, it’s a way to hamstring you.

These people cannot be entrusted with the power to wipe their own buttocks, which they would use to secure feces to fling about rather than dispose of.

If these criminals would conduct themselves in a legal and moral manner, these non lethal job control measures would be unnecessary!

“…the use of a strong irritant like that, that causes coughing, sneezing, people to remove their masks because of the extreme discomfort.”
This is utter BS. In pre-COVID days, whenever protesters are hit with CS they apply masks and kerchiefs to their faces in an effort to defeat the gas. I’m sure everyone here is familiar with photos taken in earlier times of rioters covering their faces with anything on hand whenever they were hit with gas.

Militaries around the world expose their troops to it in training, sometimes to get them used to wearing protective equipment, and at other times exposing them without the equipment to convince them of how nasty that shit can be. Enough CS in a closed environment can suffocate a person, but when used outdoors, and with opportunity to remove oneself from the affected area, CS is fairly innocuous.

Also note there are two types of “tear gas”: CS and CN. CS (aka “combat smoke,” although the name actually comes from its chemical composition) is a non-persistent effects agent, meaning that the chemicals break down in a very short period of time (in most conditions – but CS can settle in windless conditions and lower temperatures and can cause irritation hours later if disturbed – ask me how I know) and lose their irritant effect. CN is a persistent effects agent, and, as the name suggests, lasts longer in an area and can deny the area to unprotected personnel for a longer period of time than CS.

How effective has the federal response been to the attacks by insurrectionists in Portland. Not very.

look, the whole purpose of a society establishing laws and enforcing them is to allow that society to run peacefully. Once the leaders of a society allow certain groups to violate the law, with impunity, the fabric of society breaks down. Groups of people become their own little societies with their own rules and penalties. This is tribal ism. And, it never works out well.

The insurrection should have been put down swiftly. It was not. Now it will take longer, cost substantially more and be even more uncomfortable for the members of society. Some civil leaders, somewhere, are going to have to get off the pot, gird their loins and take care of business. Otherwise this nation will revert to the tribal wilderness that it was in the 17th century.

Also, perspiration and masks that collect and direct a viral load to your eyes, nose, and mouth.

They say their right’s in the Constitution

But if they would leave there would be no pollution.

Just use the water hoses first

(do they worry about human waste being hosed down the storm sewers?)

I wonder how much environmental damage is caused by graffiti and the cleanup associated with it.

Can someone please realize that there is no pandemic and get on with things?

Pepper is good for the heart. Right up there with garlic, ginger and turmeric.