Legal Insurrection reader David runs his family roasting business specializing in rare and exotic coffees. My kids ordered a one-year subscription for me, and the first batch just arrived. 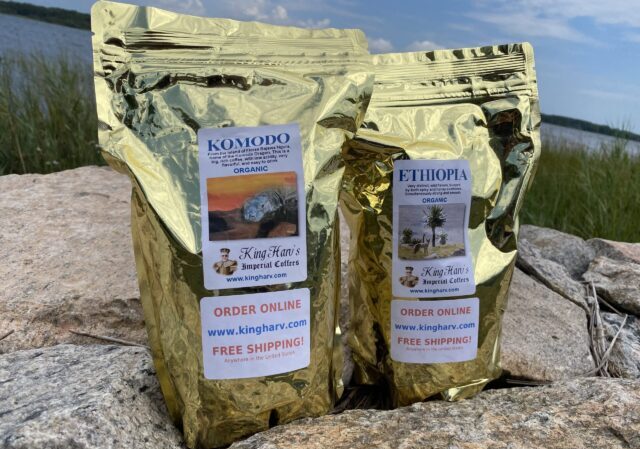 You may recall that in June 2018 I wrote about a shipment of coffee I received from reader David, who run’s King Harv’s Imperial Coffees, a family business. King Harv’s specializes in exotic and rare coffees, not the sort of bean you can get even from most specialty roasters.

Read all about the history of King Harv’s and see photos of his roasting operation at my prior post, All Hail the King Harv’s Imperial Coffees:

I have been known to be drink $4 Ithaca lattes, if visiting Legal Insurrection readers pay.

So when reader David threw a pity party for me after Amazon dumped us, and offered to send me some coffee from his family business, I was like: If you insist.

Wow, he didn’t just send me coffee, he sent me the mother lode. 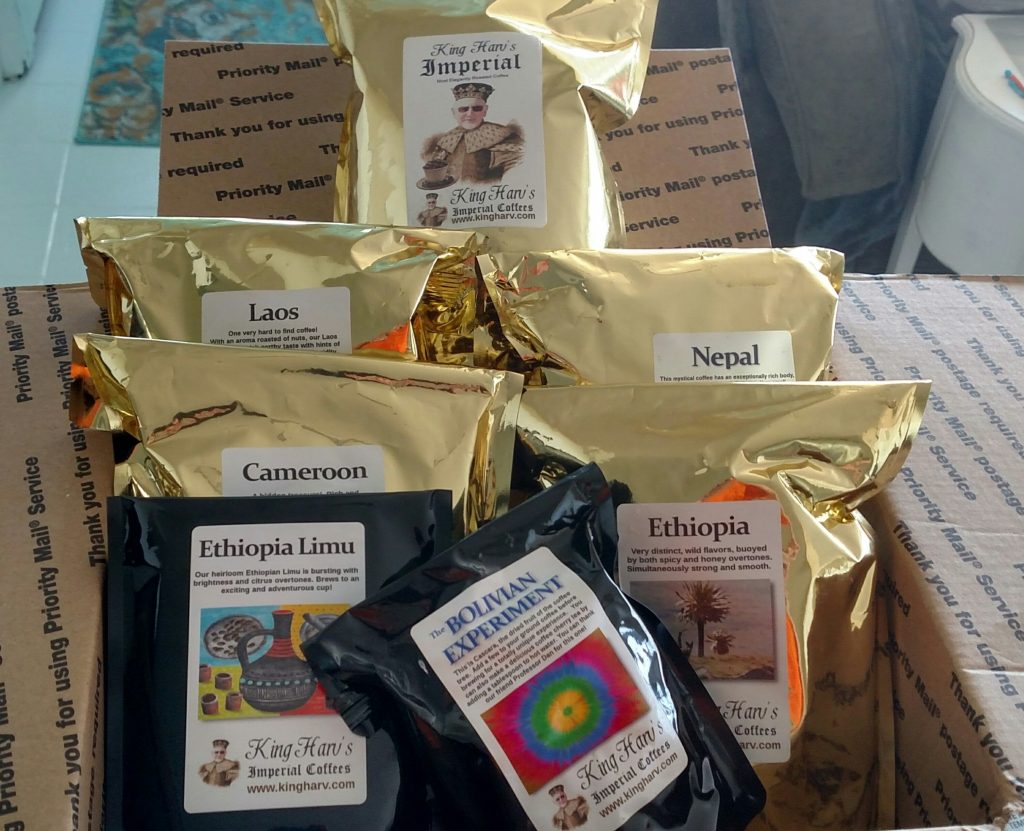 So fast forward. The kids (all grown, but still called “the kids”) decided they wanted to do something special for me (because I’m just THAT good), so they ordered a year subscription from King Harv’s, one lb. each of two different coffees shipped each month for a year. David did the selecting, and the first shipment just arrived of Komodo and Ethiopian beans. [See Featured Image]

In following months, different beans will be shipped, so by the end of the year subscription I will have tried almost two dozen types.

I’ve tried the Komodo, and it was quite good. As I mentioned in my prior review, I usually shy away from bolder roasts because they are bitter, but as before this bolder roast was not bitter at all.

King Harv has done it again.

(In case you were wondering, we are not paid for this post and the kids paid for the coffee. I’m writing this because I like the coffee and want to call attention to this Legal Insurrection reader’s business.)

[Featured Image: My first shipment at our sea wall in Rhode Island]

Better than a cup of Joe ( Biden ), eh? And, a fitting way to give you a boast for all the crap you have had to deal with in the last few months, Sir.

You deserve it Prof. Jacobson! So, go ahead and sip away into many luxurious moments of pleasure.

Thank you King Harv for making our day too by supporting one of our finest heroes with your fine brew!

My wife fresh grinds 8’oclock whole bean coffee for me every morning. Its managed to keep us married for 20 years.

Coffee is a big part of my day, and evening. I will give them a try out. I myself also enjoy espresso, so strong coffees and bold roasts are the normal for me.

I strongly believe that freshly brewed coffee, delivered to your spouse’s bedside, upon waking, is a powerful marital aid.

Sounds like an amazing business! I must investigate, as I currently grind my own beans (mostly Trader Joe’s varieties) and make coffee in an excellent Bodum “pour-over” drip device.

I will use this occasion to encourage others to buy whole bean coffee and grind their own beans in a small electric spice or coffee grinder — it takes a few extra seconds of work, and, the flavor and aroma of the resulting brew are necessarily far superior to coffee brewed from pre-ground beans, which loses aroma, essential oils and flavor immediately after being ground.

I’m a heretic. Trader Joe’s Breakfast Blend, run through a $49 burr grinder and brewed in a <$50 drip maker.

That’s nothing. Lady Pitts doesn’t drink coffee and shies away from hot beverages in general. So as the lone coffee drinker in the house I go through 100 K-cup pods in about one to three months, depending on the time of year.

I do prefer dark roast, because apparently caffeine isn’t my primary reason for drinking coffee.

cool.
I’m a simple guy, never could get into all the blends, just a folgers guy here and often instant coffee.
but glad you are enjoying it and glad he’s able to run a business he seems to enjoy.

I bought a coffee roaster 8yrs ago, and roast coffee beans for myself (a 1 lb each week). After reading this I decided to purchase 3 lbs from King Harvs. Looking forward to trying the Komodo, Haitian Blue & King Harv’s Imperial soon.

placed an order on the 25th, shipped immediately, and it arrive via USPS yesterday afternoon. Tried the Haitian Blue this morning. I think I’ll stick to roasting my own coffee.

Nice coffees, but wow, those prices!
This is a great coffee vendor who hires challenged employees and their coffee is great –
https://www.bittyandbeauscoffee.com/

oops. 12 oz bags and they charge for shipping.

By the way, there is no “subscription” link on the King Harv website.

They are not able to process subscriptions through the site, main page say to contact directly ([email protected]). I’m looking forward to it- Bravo Zulu, Professor!!

Being a lifelong fellow javaholic on an eternal quest for that perfect cup, I think I’ll look into this myself. Thanks for the reminder and enjoy your brew(s).

I’m amazed at folks who can drink the same coffee for a lifetime. As if my body needs to remind me every once in awhile that it’s changing (read: falling apart), coffees I enjoyed for years suddenly taste foul to me. Mom and Dad were drinking Brim when I first started drinking coffee in high school in the early 70’s. Always bought what was on sale: Folgers, MJB, Hills Bros, canned store brands. They always seemed mealy to me – but what choice was there back then.

We’ve just changed again, after 2 years of drinking pod coffee from a Keurig (Paul Newman’s Own special blend, Peets Major Dickason) … tallied up what we were spending on coffee and while we can afford it, the Keurig became incontinent and forced our hand. Present coffee habit is Community Coffee (from Louisiana) – their morning blend is pretty nice. It’s reminded me of what is missing from pod coffee – body / mouth feel.

Never understood the affinity of people here for Starbucks … it’s bitter, too hot and made by snoots. That’s funny to me … some kid who makes coffee being all aloof while serving a rocket science guy – retired, a lawyer or business person. Tully’s makes better coffee than them by far, and without the woke culture BS.

I no longer go to Stsrbucks. Yet, in the many years of goung, and to locations all over the nation I:

Never got a race lecture.
Was never made subject to snootiness.
None were ever rude.
Never found used drug paraphernalia in rest rooms.

As long as this subject has come up:

My father was a bigger javaholic than me and was addicted, for lack of a better word, to Old Judge medium roast, a popular brand in our neck of the woods in Indiana when I was growing up. The regional wholesaler dropped it one year when I was in about 8th grade and it was simply not available locally after that. My dad wasn’t putting up with that, so he worked a direct deal with the Old Judge company in St. Louis to have 4 dozen of the large coffee cans shipped direct to us every couple of months, an arrangement that lasted until he died almost 10 years later. Apple didn’t fall far from the tree.

Hi everyone, this is David from King Harv’s Imperial Coffees. A little about us. King Harv’s is a family business in Apopka FL, named in honor of my Dad Harvey, who the family has alway’s referred to as “The King”. We’ve been roasting coffee since 2002, and love searching the globe for rare and exotic coffees. All of our coffees are full pounds, 16oz, and have free shipping. (Not to be argumentative, but a lot of other roasters ship 12oz bags, and charge for shipping) When you do the math, we come out pretty darn good. Also, about subscriptions. We put a note on our website that we do do subscriptions, but our website is not capable of processing them so we do it via e-mail to [email protected] Discounts are from 10% to 30% for subscriptions. We have over 50 coffees to choose from. Thanks for reading. http://www.kingharv.com

Thank you for providing some background on your business, your Majesty! Much appreciated. 🙂

Cheers and all my best.

Endorsed. Green Mountain used to market a light roast Yirgacheffe that was sublime, especially when brewed espresso style. Can’t find it any more but it was great while it lasted. Other brands of Yirgacheffe have come close but not enough. I’ll have to check out gobena.org. Thanks for posting.

My wife refers to my dark-roasted Keurig cups as “tinted water”. As you might guess, she’s into stronger coffee. I’ll have to look into King Harv.

If you find the darker roasts to be bitter. Try lowering the temp of the brewing water to 198-200F. The compounds that tend to lend bitter qualities to the brew become more prevalent at higher temperatures.

My grandparents were coffee fiends, but neither my parents nor I inherited that gene. I’m still not old enough to drink coffee, and at this rate I’ll never be.

And Thanks, Professor, for a little lighthearted distraction from the lunacy all around us.