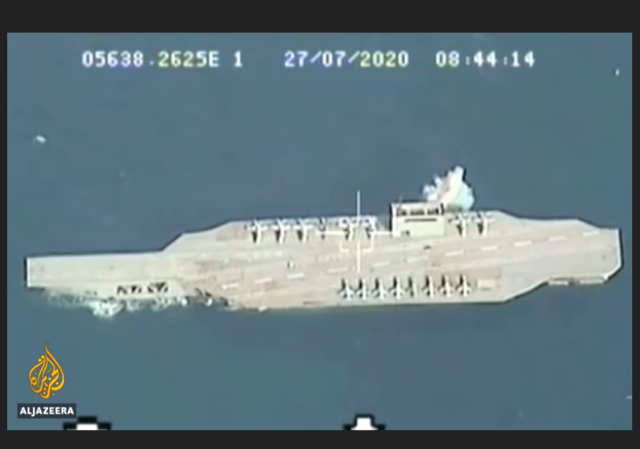 A propaganda stunt turned into a major embarrassment for Iranian military after it accidentally sunk a fake U.S. aircraft carrier, blocking the country’s main waterway, satellite imagery shows. “A replica US aircraft carrier that Iran struck with a barrage of missiles in a propaganda video less than a month and a half ago appears to have capsized in the Strait of Hormuz,” Times of Israel reported on Friday.

The ill-fated naval drill, named ‘Prophet Mohammed 14th’ war games after the founder of Islam, went awry when the fake carrier capsized at the wrong place, blocking the approach to Iran’s main port Bandar Abbas. The dummy carrier, made to resemble a Nimitz-class aircraft carrier, was designed to be reusable and was being towed away after the drill when the mishap happened.

Forbes magazine was among the first to report the embarrassing mishap:

The saga of Iran’s fake aircraft carrier, intended as a propaganda coup, is turning into an own goal. The Iranian armed forces, particularly the IRGC-N (Islamic Revolutionary Guard Corps Navy) delight in attacking the mock U.S. Navy aircraft carrier. It makes their war games more dramatic. And it may be intended to symbolize that they could, if called upon, sink an American carrier. The carrier itself, actually an elaborate target barge, is not intended to sink, however. It is meant to be reusable and has been symbolically ‘destroyed’ twice already. But now it really has sunk. And in very much the wrong place.

The stricken carrier can be seen, capsized, in commercial satellite imagery. The dramatic view above has been shared by Aurora Intel and shows PLEIADES satellite imagery (material © CNES 2020, Distribution Airbus DS, all rights reserved. Acquired through ShadowBreak Intl). The image is taken from above, and shows that the carrier is listing at about 90 degrees. The starboard (right-hand) side is facing upwards. As you look at the image, the carrier was heading from right to left of the image when it succumbed to the waves.

It began to sink when it was being towed back to Bandar Abbas after being attacked. Sebastien Roblin wrote for Forbes on July 31 that the vessel was “listing steeply to one side, with nearly half of the flight deck submerged.” Since then the situation has deteriorated.

The carrier is very large, but still much smaller than the U.S. Navy super-carriers it is designed to represent. We know that it is meant to symbolize U.S. carriers because the mock aircraft have U.S. Navy markings painted on them. It was built in 2013-14 and then dramatically ‘destroyed’ during war games in February 2015. Recently it has been repaired in Bandar Abbas and towed back out to sea. It was then attacked again on July 28 as part of the ‘Prophet Mohammed 14th’ war games. It was circled by speed boats, likely including some of the 100 new vessels unveiled in June, and hit by missiles.

Besides knocking down defenseless dummies, Iran’s Islamic Guards (IRGC) is skilled in going after unarmed women and children. IRGC and its Basij militia massacred over a thousand protesters who took to streets in last year’s anti-regime demonstrations.  They used snipers and machine guns to shoot into crowd, cell phone footage and other evidence showed. Basij enforcers regularly patrol Iranian streets compelling women to wear Islamic headscarves, or hijabs. Women refusing to wear hijab are threatened with rape, torture, and long prison sentences.

This is the second major blow for Iran’s Islamic regime in recent days. The Tehran-backed terrorist organization Hezbollah has come under suspicion after 2,750 tons of ammonium nitrate stored in a Beirut port exploded, killing more than 150 people and wounding thousands. Ammonium nitrate is Hezbollah’s ingredient of choice for making bombs and IEDs.

It takes a special kind of talent to lose by an own goal against a team of cardboard cutouts.

I guess we could sweeten the deal. We could retaliate in kind for sinking a faux image of one of our carriers by dropping Patton’s faux army on them if the English still has it in storage.

“The property of pronounced and pathological incompetence particular to Arabs that results in failure despite numerical superiority or access to workable tools.”

There is a word for this pathology: inshallah.

Iran doesn’t seem to understand that in a real fight the ship and it’s aircraft would be kicking the living crap out for them. And there would likely be cruise missiles and maybe even ICBM’s raining destruction and death.

In a real war situation, the carrier would not be sailing close enough to the coast for helicopters and artillery to reach it. And would have a fleet escort to defend it from direct naval attack.

(No sure what the gadget input for a thumb-rating. ‘Pologies if it’s a down).

Carriers are fat, juicy targets. We have countermeasures, but it’s impossible to get a carrier to jump out of place in few seconds and pretty much impossible to shoot down a supersonic missile capable of maneuvering, which is what exists now.
A half-dozen small, concrete busting warheads on the cooling pumps/tanks at their plutonium-producing nukes, followed by even smaller weapons to crack any containment domes would send quite a message. They’d have enough time to shut down the reactors. Should they restart, the just-a-message strike is replaced by a meaner one.
Where there’s enough will …

I was thinking a special kind of stupid. Your description is much more charitable. These clowns either have no shame or they think the rest of the world is just as stupid.

As a result, Iran’s oil exports will be blocked until the Straights of Hormuz are cleared. That is a pretty good definition of shooting oneself in the foot!

Iran was so flush with cash they could spend money on a mock carrier. I wonder where all that spare cash came from? At least the US Navy can strike a president’s name from the roster for ships. The Iranians already graced theirs as IRN Obama.

There had never ever be a USN ship named after that great mistake.

Proving once again that the best and brightest of the Indo-Europeans were not the ones who migrated to the east and south.

Persia was one of the great empires of the ancient world. There may have been a culture change after 1400 years of fascist islam.

those damned jooos making us blow up our own replica and sinking it…..
mark my words israel will get blamed as soon as this news spreads more.

“The life-size dummy …” – No.
“The carrier is very large, but still much smaller than the U.S. Navy super-carriers it is designed to represent.”

(In all honesty, it could be three times the size and not be a good fit for wargames; the dummy ship just sits there, no air cover, no fight back. It’s a propaganda stunt, not a military activity. That said, you’re right, and I’ll fix!).

No worries. With everything being designated “fluid” theses days and math being too “white” .. size is a just a “construct” also. Let’s just relish that the Iranians made it big enough to matter.

We don’t know that for sure since it was “running silent”, no communications to intercept. It could have been a Trojan Horse filled with US or Israeli troops preparing to launch a ground invasion. Could be why the IRGC decided to sink it. Those Joos are so-o-o sneaky!

So the cancels (Suez and Panama) are under threat

So the cancels (Suez and Panama) are under threat

that supposed to be canals or is there a cancel culture meme I am missing?

There something going on with the Panama Canal as well? Because the Suez and Panama are on pretty opposite sides of the world. This accidental sinking is only affecting the Straight of Hormuz, interfering with Iran’s ability to access the seas.

So “dummy” applies to the Iranians as well.

“Fanfaron” (much fanfare) is the Italian word for a fool swishing around trying to look big and important. Fits Abdul and his ilk to a T.

Only the klutz Iranians could manage to block their own port with a poor copy of an American aircraft carrier.

Wait, isn’t this the allegedly “peaceful” nation that the sainted Obama played footsie with, in a vanity-driven capitulation farce of self-congratulatory naivete/foolishness, that was laughably presented as an allegedly grand and sagacious statecraft “deal?”

What did we just unleash? I love you.

There are 3 causes of catastrophic failure in battle.

They are working on number 3.

I misread the story. I thought it was about the upcoming boxing match between Mike Tyson and Roy Jones Jr. You know, they tow away the old bodies after the match on the mistaken assumption that they are “reusable” but instead they capsize.