Can Higher Ed Be Saved From ‘Cancel Culture’?

Can Higher Ed Be Saved From ‘Cancel Culture’?

Our appearance on Fox and Friends promoting tonight’s panel discussion. 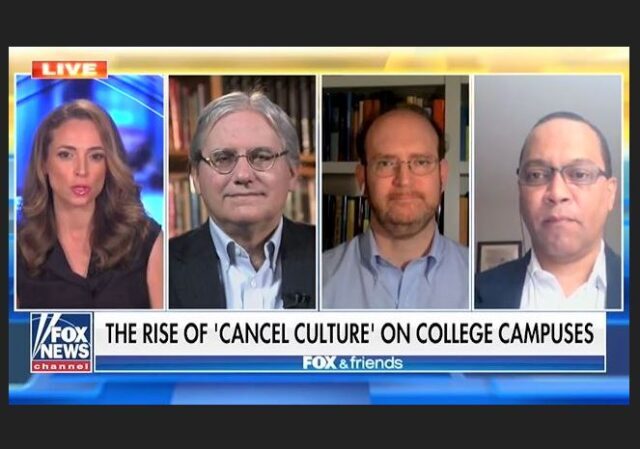 Tonight, Sunday, August 30, 2020, at 8 p.m. Eastern, we will have our panel on Saving Higher Ed From Cancel Culture. Registration is required, sign up here. We will close registration, which now exceeds 500 people, no later than 5 p.m. today.

Three of our four panelists appeared on Fox and Friends this morning to discuss the topic.

This is just part of the swamp that needs to be drained. This didn’t start in 2016 or even in the 20th century. It’s not going to be solved in one election.

notamemberofanyorganizedpolicital in reply to 2smartforlibs. | August 30, 2020 at 3:11 pm

Time to Cancel all public education.

Think this article would apply to college also.

Let It All Burn (Or Not)

Having worked in the Intelligence Community for over 40 years I have seen this before.
A Russian Defector in the 1970’s, Yuriy Bezmenov, revealed that the Russian KGB began infiltrating the US Education system in the 60’s which would take a generation to be put in place.
In the 80’s we would debrief Russian Defector’s and used Bezmenov’s statement for vetting. Unfortunately the Government did not see Bezmenov’s warning as an imminent threat.
If not familiar with Bezmenov below is a short (13 min) you tube interview from the 70’s.
https://www.youtube.com/watch?v=bX3EZCVj2XA

I’m working tonight, so I won’t be able to participate. But work is 5 minutes away and I come home for dinner every night.

It isn’t clear … can someone who isn’t registered and participating still watch the proceedings for a little while?

Jason Hill has it all figured out.

TheFineReport.com in reply to notamemberofanyorganizedpolicital. | August 30, 2020 at 10:04 pm

What a mind, huh?

Looking forward to hearing some perspective from the rapidly-dwindling, sane and courageous members of academia who have not given in to the Left’s obnoxious, bullying and jackbooted totalitarian antics.

Hopefully the panel discussion won’t just be more hand wringing; I’m pretty sure we all know what the problem is. What I would like to see are some ideas on how to _force_ colleges to stop indoctrinating our children. I’m not sure cutting off their federal funding would help much; For example, we’ve seen numerous media outlets demonstrate that they would rather go bankrupt than change their editorial content. Statism is a religion for these people. Ayn Rand wrote that it is a moral “sin” to support those who would destroy you, and clearly some of these colleges and universities want to destroy their students’ ability to think.

I can only think of one thing that could be done legislatively to stop the harassment of people like Professor Jacobson: Amend Section 703 of the Civil Rights Act of 1964 to read:

It shall be an unlawful employment practice for an employer…to fail or refuse to hire or to discharge any individual, or otherwise to discriminate against any individual with respect to his compensation, terms, conditions, or privileges of employment, because of such individual’s race, color, religion, sex, national origin OR POLITICAL VIEWPOINT.

But if we can’t change the behavior of these colleges, at least we could identify which colleges support Reason, Free Markets, Free Exchange of Ideas, the Individual over the Collective, IOW, all the ideas that used to be called “Western Civilization” – and which ones don’t. A rating system could be developed and published – similar to the American Conservative Union ratings – so at least parents and students could steer away from the worst offenders.

State legislators/DoE (rightfully) don’t seem to have a problem with me getting fired if my politics enters my teaching. Apply the same.

Just left the Zoom presentation: it was excellent.

The speakers were so very impressive.

Like Navin Johnson said (1979 movie starring Steve Martin), everyone’s looking for their ‘special purpose’… Our nation’s youth have been told so many times that we should honor our “greatest generation”, and that the various civil rights icons should be heralded as “heroes”. John Lewis even has an enormous mural of his face on a downtown Atlanta office building (visible from the downtown connector) with the caption “HERO” above it.
When the unaccomplished who desire hero status see these things, it isn’t unexpected to see them gravitate to groups that adopted a ‘struggle’, especially if the group presents itself as altruistic and “for the greater good”. Except that now, the activist groups are operating in an environment that protects their safety and legal status, very unlike the environment described in Seeds of Discontent, by J. Revell Carr.
The bottom line is (and I think the participants are aware of this also), most activists today are so comfortable and have it so good that they need to manufacture a cause to fight for in order to satisfy their inner desire to have a special, romantic, socially acceptable purpose. Unlike the folks that participated in the civil rights marches of the early 60s, today’s protestors are the ones throwing the bricks.
It probably isn’t as explainable as that, but SWJs typically don’t have a very clear answer when asked why they are protesting whatever their group is protesting on any particular day. Like Mr. McCarthy of National Review stated, “a triumph of distorted narrative over critical thinking. They are ill-informed, or [willfully] uninformed, about the phenomena they claim to be animated by.
It begs repeating: The Left ruins everything.