What would happen if the seated woman were to complain about her treatment? She would be told that she just doesn’t like being criticized. Anyone who thinks that’s what’s going on either doesn’t understand the dynamic of mob rule, or is part of the mob. 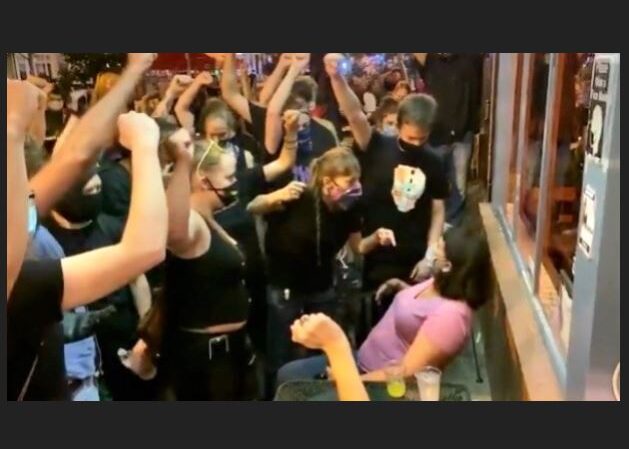 A video of Black Lives Matters protesters targeting white diners in D.C. with demands to raise their fists in solidarity has gone viral.

The WaPo videographer noted that while those in front were all white, that was at the request of black protesters who told their white allies to move to the front:

6) Given many comments regarding protesters’ races, it’s worth noting that a young Black woman leading the protest Monday asked White protesters to step forward, as seen here. This direction was given more than once. pic.twitter.com/NEj7z7hdLj

Watching the video, and also preparing for our event on Campus Cancel Culture next Sunday, it struck me that the harassment and image were a perfect metaphor for campus culture.

The D.C. mob wasn’t on campus, but it was the same dynamic. It’s something I’ve discussed before, the migration of campus culture into the larger culture.

The boldness of those participating in a mob. The demands for conformity to their agenda. And the insistance that silence will not be permitted.

One other thing. The person seated refusing to raise her fist in solidarity. What would happen if she were to complain about her treatment? She would be told that she just doesn’t like being criticized.

Anyone who thinks that’s what’s going on either doesn’t understand the dynamic of mob rule, or is part of the mob.

If you want to understand what campus culture is like, this image is a perfect metaphor. The person sitting down will be accused of just not liking to be criticized. pic.twitter.com/bATN3jTOAQ

Everyone should see this.

The DC mayor has finally come out and condemned the “protesters” (Brown shirts). Many democrats have suddenly decided to condemn the rioters after months and sometimes years of silence. I guess the DNC handed down talking points after the latest polls were released.

She said what happened to the diners was “inappropriate” and possibly against the law if it was on private property. Not a great condemnation.

Intimidation isn’t democratic. It is bullying. The very thing we are trying to teach our children they should never suffer at school. The thing we are supposed to have zero tolerance for.

Now, here in these protests both by BLM and by those who vilify Trump supporters in their cancel culture too, we are witnessing the rise of untouchable Bullies — The Bully Mob — who do not fear us.

Taking a stand and fighting back will cost us more the longer we don’t fight back against this tyranny.

Excellent point. The mob in this image would agree that children should never be bullied. If told that bullying was precisely what they were doing, they would disagree, because reasons, and then tell you to shut up and raise a fist in solidarity or else.

If I had been there, I would have gladly told these idiots that I don’t submit to ideological purity tests applied in public by goose-stepping, totalitarian fascist-bullies, and, told them all to go F themselves.

I wouldn’t raise my fist.

But I would raise a finger.

I’d be inclined to raise my fist……to administer five in the chops!

Most of these protesters appear to be white suburban Marxists.

The most insufferable and obnoxious sub-species of coddled, spoiled-brat, Dhimmi-crat-ingrates, I submit.

I would add well fed… at least the women are.

Let’s see them try that at a biker bar.

This thuggery reminded me of this:

The only difference that i know of between today and this from history is that if someone didn’t salute the memorial, the SS scum would beat them. But be patient. That will come soon enough.

If this were to happen to me, I would simply get up from my table and notify the closest staff member of the restaurant that these cretins were spoiling my meal. Then I would tell them that I am now going to leave without paying.

If they don’t like that, I’d suggest to them that they just call the police, and see how that works out for them.

Nothin’ to it but to do it.

This behavior bears striking similarity to Sodom. While BLM is not physically raping people, they are committing a kind of personal / spiritual rape. All the while democrat governors and mayors, like the king of Sodom, are either ignoring the behavior, enabling and even encouraging it.

They clearly have no regard for the living temples of God’s presence (1 Cor 3:16, 6:19). I wonder how long before He has had His fill and smites them again?

If “words are violence,” then this looks like a deadly assault to me. A physical response would be appropriate.

This is simply a variant of the privileged AIDS activists who used your “inaction” as proof of your complicity in “the plan” to wipe out all homosexuals. “Silence = Death” was the symbol, found on T-shirts, posters, and especially decals which they pasted every where.

“White silence is violence” was the chant used to yell at diners the other night. Expect that tactic to continue. You will be made to care. “If you don’t join us, you’re an enemy deserving of death.” How Islamic, how Muslim-like: If you refuse the offer to become Muslim, you’re an enemy.

A white fist is surely the “white power” salute.

Even on campus, the genesis is the anti-Israel campaign, and the tactics and results much the same.

The thought of these people having power is revolting. Authoritarian know nothings, pretending they know all, so no more may be said.

Can we STOP calling these BLM “protests.”??
In these past months, BLM has done more to increase racial divide to allow racism to rise further than decrease. These riots will not allow healing or allow conversations for the change they scream about.
BLM “players” ONLY want to engage in war games and they ARE enjoying every minute of terrorizing people, destroying communities, feel “big” and steal. stuff. What we are watching are violent criminals. Period.

The Democrats are either tolerating or encouraging this behavior. The Police are not protecting the citizens per the Democrat Party plan. That leaves only two options: Surrender to the Marxists/Democrats are fight back. However, the thugs are working in Democrat territory to minimize the resistance coming from the citizens.

The game plan appears to be to draw Trump into deploying federal police or the military into these cities. The Democrats must already have their CNN talking points ready. And, they think it will be a November win for Kamala (Biden will step aside after a few months).

What to do until November? The only options appear to be active resistance from the citizens and open (and maybe active) support of the Police. And, it must be as members of groups as in Soros bought territory, citizens will be prosecuted if acting alone. We must help each other. Is not that the foundation of this country? We have enemies within and they are fighting.

Deranged white people attacking only white people under the banner of BLM with the premise that all white people are racists. All of us. It just doesn’t get much more demented than that.

These people are sick and self-destructive. Perpetually angry people looking for any reason to lash out.They are always present but now our own government has provided them with that reason. Useful tools. If they succeed, the black shirts will eventually kill off these brown shirts once they are no longer useful. They have a better chance to come out of this alive by losing.

Where was the restaurant owners. I’d call over the owners to deal with this. If they didn’t, I’d walk out on my bill. It’s their responsibility to make my meal enjoyable.

“The D.C. mob wasn’t on campus, but it was the same dynamic. It’s something I’ve discussed before, the migration of campus culture into the larger culture.”

Spot on. The photo instantly reminded me of the scene outside Brett Weinstein’s office at Evergreen College.

Convince me. Crowding me like that, the answer’s “no”.

I, personally do not as yet have experience with exactly that sort of public beratement. I do have post-stroke experience with medical folks, admin folks and helpers on a mission who think they’ll push me into what they want right now.

“If I feel crowded, the answer’s no.”