“Our downtown properties have sustained significant vandalism and a number of employees and contractors have been assaulted in recent months.” 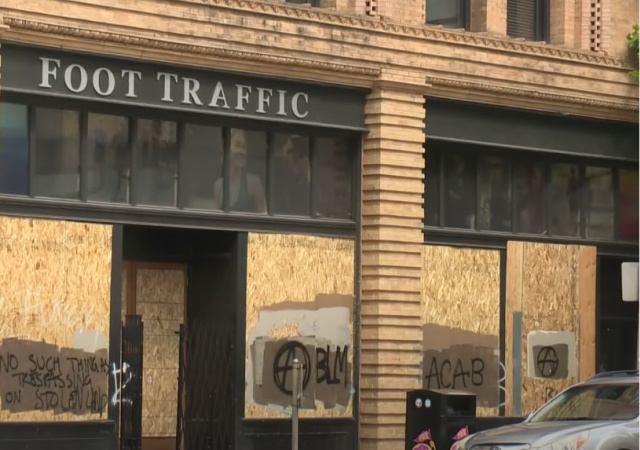 The violence in downtown Portland has escalated in recent days with one reporter describing it as a war zone.

Thanks to the unchecked mob showing up amid a global pandemic, several companies have decided to either move out of downtown or have employees work from home.

The Standard Insurance Center at 900 SW 5th Avenue is part of downtown Portland’s cityscape and until this spring, was home base for most of Standard’s 2,100 Oregon employees. Nearly all of those employees are working from home now because of COVID-19.

“Our downtown properties have sustained significant vandalism and a number of employees and contractors have been assaulted in recent months,” Speltz said in an email.

But even after the pandemic ends, Standard Insurance does not know how many employees will return to the building. It all depends if the “conditions in the neighborhood improve.”

In a survey reported in July, an unnamed business lost $20 million:

The protests, combined with the pandemic, was found to have caused several million dollars in either damage or lost revenue, a survey administered by the Portland Business Alliance found.

One of the responding businesses reported losses of more than $20 million alone. The company wasn’t named in the findings, however the staggering number is said to still be growing.

‘The financial consequences to the downtown corridor are a running calculation that is almost impossible to wrap your mind around. The financial impacts of physical damage is one thing, and that continues to increase,’ the organization’s president and CEO, Andrew Hoan, said in July. ‘Then the ongoing loss of revenue to the business community who cannot operate their places of businesses is also a number that continues to rise.’

The whole situation will likely get worse since the riots have leaked into residential neighborhoods.

A week ago, rioters went into the Kenton neighborhood after police pushed them back. Residents expressed frustration on social media, demanding protection for everyone and small businesses.

[Business owner Terrance] Moses said business owners in the area are already struggling because of COVID-19 and this is only making matters worse.

“Nine businesses in the Kenton district is black and minority owned and one of them was spray painted and we put thousands of hours putting together that plaza so Black-owned businesses can expand outside,” Moses said.

Moses’ message to those causing damage is plain and simple–he wants the violence to stop.

“My message to you is stop, let’s regroup and have a plan other than destroying things for destroying’s sake,” Moses said.

This video is from July, but the message is still relevant:

Run away, fast, and don’t look back.
Plenty of America is law abiding and open for business.

Just don’t bring those marxists or their ideas with you.

It seems like the Portland politicians are trying to force people to resort to vigilante justice. The mayor is encouraging the riots and forbidding the police to fight back against violence. The rioters throw weapons and fire explosive devices at the police, but the police aren’t allowed to shoot back.

When the police arrest violent rioters, the DA is refusing to press charges, so the rioters act with impunity. The governor refuses to call in the National Guard, and shamefully opposed the presence of the Feds to protect the federal courthouse.

The justice system has been subverted by politicians to cater to their anarchist supporters. People with businesses in the area and people who travel through the area will have to take security into their own hands. Otherwise, there is no end in sight.

Only problem is that in Portland they will prosecute self defense. Look up Micheal Strickland. An Antifact mob was going to beat him. He drew his Glock and pointed it at them. No shots fired. Now he is looking at prison.

There are lots of weapons which could be used to put down Antifa and BLM clowns which are not easy to trace.

How long should this lawlessness be allowed with complete impunity? At some point the perps need start being put down. As far as I can see, no one in a position of authority is going to do anything.

>>It seems like the Portland politicians are trying to force people to resort to vigilante justice.

I think that you may be on to something. Recall how early in the Minneapolis riots the Progressive politicians and media tried to either blame it entirely on “boogaloo right-wing” factions, or create equivalence by claiming that they and Antifa were responsible.

That didn’t last long. But at the time I wondered if they were hoping to make it a self-fulfilling prophecy.

If “right wing” groups (if any really exist) start acting up, it would serve Progressive ends by helping to neutralize the Antifa-BLM riots as a campaign issue, since it could be spun as “both candidates’ supporters are violent” instead of just Democrat supporters.

As well, there are certainly more dedicated revolutionaries under the Progressive-Democrat umbrella who would like to escalate the current cold civil war into a hot one.

Speaking of umbrellas, I think these might be the Penguin’s henchmen. https://www.youtube.com/watch?v=mgq31LYgySc

The proper and moral vigilante justice would not be against the mob, but against the obstructionist city leaders.

“…certain unalienable Rights, that among these are Life, Liberty and the pursuit of Happiness. — That to secure these rights, Governments are instituted among Men, deriving their just powers from the consent of the governed, — That whenever any Form of Government becomes destructive of these ends, it is the Right of the People to alter or to abolish it…”

I think the end game for the Left is to push people into self defense and get bodies of all sorts splattered on the ground. They want lawlessness because it will eventually provoke someone into mass shooting with a definite racial angle. Carried far enough, you may see vigilante justice. If the Left is in control, you’ll see an immediate pivot to their style of “law and order”. Gun and property confiscation via kangaroo courts, coupled with “re-education camps” for those who won’t spout the party line, all run by your friendly neighborhood thugs.

On the other hand, if they can’t intimidate people into sitting out the election (assuming it can’t be outright stolen), then they are creating a lot of Trump voters.

I know a man, a native Portlander, who said a few years ago he was considering moving to the Phoenix area. He recently pulled the trigger. I can’t say I blame him. He’s a great guy and shouldn’t have to worry about being accosted by miscreants.
.

If only someone could have seen this coming…. sarc.
LIBERAL PLAYBOOK: Never think past the knee jerk.

The United States closed most of its mental hospitals. Apparently, many of the inpatients ended up in Portland. Some of them even serve in Government.

Actually it’s drug addicts – Portland stopped arresting drug addicts many years ago. I was at a business meeting in Portland in 2018 – I was shocked at the number of people laying on the sidewalks. Needles everywhere. The night we got to Portland, the city was holding a free needle give away.

I lived in Salem from 1999 til 2016, always like portland, its place along the river and would put my boat in there. But the drug addicts, transients, and homeless vagrant youth who had money for phones, drugs, cigarettes etc, who were living on the street was a terrible sight.

Mayor Wheeler own this as does Mayor Groot in Chicago. They pandered to criminals and destroyed their cities.

I travelled to Portland a lot on business trips from 1985 to 2005. I liked to stay at the downtown Heathman Hotel–it’s an old hotel but has kept its high end “luxury” status. That’s the same hotel where Al Gore was trying to let out his “second chakra” with a hotel masseuse. She wasn’t interested in helping old Slimbeball Gore’s chakra out of his pants or wherever.

That said the Heathman is avery nice hotel—but it’s less than a quarter mile from the Federal Courthouse in Portland–just a three minute walk. I can’t help but think that their business is way off.

That distance is either far less than 0.25 mi, or you’re a hell of a speedwalker.

The heartman hotel website shows no rooms are available from today until Oct 1st. Their calendar has everday X’d out for August and September.

guess they expect riots to continue for 45 more days.

Riots or the epidemic, same effect on many lodging calendars. We’ve shuttered until November.

I guess this stops the Portland WNBR through downtown portland.

The lesson for businesses everywhere&dash;rent your office space. Resist the urge to build your own office block “headquarters” just a little bit taller than your competitors’. Leave yourself an out. Your people just shuffling papers files can do it better from home. Your Internet connection will survive BLM and antifa; it was designed to survive nukes. Put your warehouses and production facilities out where square footage is cheaper . . . and far safer. Although some functions should be concentrated, it’s obvious that decentralization is the future, although the old weakness of misplaced “corporate ego” will have to be overcome.

I didn’t see this coming.

Who cares? You didn’t build it.

All these people complaining should look in the mirror as to whom to blame. They voted for the bozos now in office. They are now reaping what they have sown. Will they change how they vote in the next election? I have my doubts.

Does anyone know whether Powell’s Books is staying?

99% of PDX is unaffected by the riots except that police services have been diverted. The much bigger issue is homeless drug addicts which account for probably 90% of the petty crime. The voters passed a $250M/yr homeless initiative which will not fix anything and ultimately double the population of people seeking handouts. I am currently salting a few areas with birdseed to keep away daytime, and ultimately, nighttime campers by having them compete with crows, squirrels, and rats for that parking strip. And we have more birds in the neighborhood, which is nice. They didn’t say whether it was Nike or Columbia Sportswear who were affected by the reduction in downtown trade, but Columbia has been on the verge of pulling out of Portland for some time now due to the homeless issue. We are clearly SF-lite in that regard.

We just picked up another rattler last night. It’s not quite frozen yet. Send me your address.

Went through Portland a year ago.Homeless vagrants everywhere. And an administration that was proud of it. They counted vagrants and criminals like merit badges.

Merit badges is precisely what they are.

A conservative looks upon a declaration of mental illness as a detriment.

A progressive looks upon it as a merit badge. It’s something to be proud of, it gives you street cred. They put it on their resumes, for heaven’s sake. You’re now a certified victim, a member of the club.

Study: 56% of Liberal Women Under Age 30 Have Been Diagnosed as Mentally Ill

Cut your losses and get out.
Do not rebuild, relocate.
But please stay in Oregon.