“How did we get to this point where so many people are callous and indifferent towards human life?” 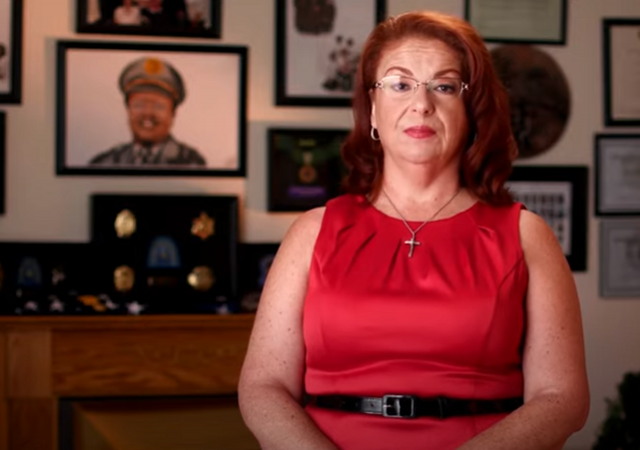 A few months ago, retired St. Louis police chief David Dorn was killed by a rioting mob while trying to protect a small business. His death was live-streamed on Facebook.

Last night at the Republican National Convention, his widow Ann Dorn recalled her loss and endorsed Trump. It was a powerful segment.

The widow of retired St. Louis police officer David Dorn delivered an emotional speech at the Republican National Convention, recounting the moment she was told about her husband’s death.

“The chief of police was standing outside. I wondered why Dave had not answered the door. It wasn’t uncommon for him to be up watching TV at this time. I called out to him several times. There was no reply. He just wasn’t there,” Ann Dorn said. “I let in the chief, and fighting back tears, he said the words every officer’s spouse dreads.”…

Ann Dorn said that David Dorn’s own grandson watched his grandfather die during a Facebook livestream, “not realizing he was watching his own grandfather dying on the sidewalk.”

“As I slept, looters were ransacking the shop. They shot and killed David in cold blood and then livestreamed his execution and last moments on Earth,” she said.

“How did we get to this point where so many people are callous and indifferent towards human life?” she asked. ”This isn’t a video game where you and commit mayhem and hit reset and bring all the characters back to life. Dave is never, never coming back to me.”

Watch the whole video below, this is powerful:

Pollster Frank Luntz noted the power of this moment on Twitter:

Hands down, the best video of the entire 4-day convention.

I’m crying in my chair watching Ann Dorn. May God Bless her.

Ann Dorn has me in tears and she hasn’t yet gotten to the moment that broke the heart of America.

I'm so glad she got the platform she deserves.

Ann Dorn’s speech is the kind that makes you stop whatever you’re doing to listen.

Please find a way to get family members, neighbors and friends to listen to the powerful words of Ann Dorn.

Its the elixir our nation needs right now. https://t.co/HLowY1uMvy

My heart breaks for Ann Dorn. This is a message that everyone needs to hear.

An incredible moment, in a convention that has defied expectations.

Obviously the words of a White supremacist.
Right?
/sarc

“‘How did we get to this point where so many people are callous and indifferent towards human life?’ she asked.”

It happened because we have #Resistance political leaders, journalists, academicians, artists, sports figures and other “intellectuals” who deeply and truly believe that they – and they alone – have the right to rule. They are willing to lie, cheat, deceive, murder, and destroy to achieve those ends, and all the while loudly celebrate their own supposed moral superiority for doing so. The more cruel and destructive they are, the more virtuous they feel.

Black on Black violence doesn’t count… don’t you know? Make that a cop shot in the back and then it REALLY doesn’t matter. The Left has juiced up the race card with the tacit reminder that obedience to the Party and Cause is the only way to avoid trouble.

Civil wars leave no room for bystanders. When the Left says “silence is violence”, they drag everyone into the battle by fear and force.

And Jackdon and Sharpton and Waters and Farakhan and Rush (Bobby not the radio guy) and Jackdon-Lee and goimg back in time Rap Brown, Clever, wt al.

The DNC Riots have shown us what is on the other side of The Thin Blue Line.

And, what the world looks like when the line is reeled in by Democrats.

His Black life does not matter to the Black Lives Matter Activists.

There are laws regarding harboring a fugitive, aiding and abetting criminals, etc.

At this point, it’s clear the so-called “peaceful” protesters are being used as cover by the ones doing the damage. With regard to harboring, aiding, abetting – generally speaking ‘providing cover for and enabling’, shouldn’t every protester in the area of assault, arson, property damage, etc. be arrested and charged with the lesser crime of enabling?

I’m asking only because I can’t wrap my head around the notion that the bad guys have to be identified by eye-witnesses and video evidence after the fact and then only the bad-guys get arrested if they can be found – while the crowds that surrounded them, gave them cover, and whose presence enabled and protected them, are given a pass.

Where they are peripherally involved, they share in the cost of damages – why not freeze assets, impound vehicles, and if living with parents, roll it up on the parents if the protester is claimed as a dependent?

Guess I think the law enforcement agencies are going at this like a surgeon trying to cut out a cancer – when a broader-scale chemo approach is called for.

I may feel differently after another cup of coffee. But this morning I’m a real grouch.

Ann Dorn is why Marxists/Democrats put people into abstract groups where lives are statistics rather than human beings.

Do they talk of George Floyd as a human being? He was a “black male killed by a white cop.” A group attacking a group. No humans involved. All politics.

Ann’s story is human. Her pain is human. It must be ignored and minimized by the left because she exposes their evil lies.