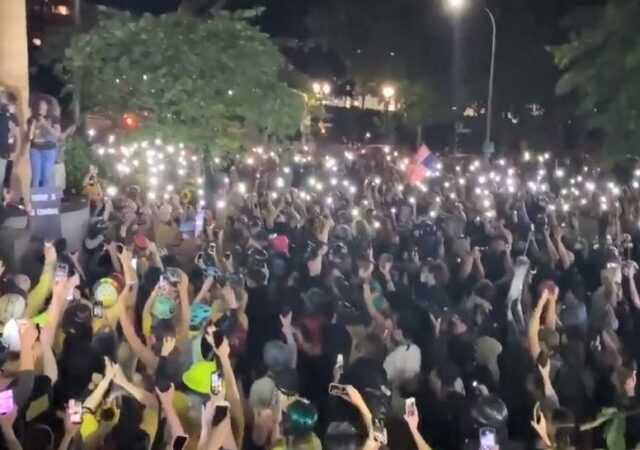 Trigger Warning: This Post Contains Insensitive Truth Telling. Proceed at your own risk.

Hey, remember all the way back to the first week of June 2020? It seems like it was 7 years ago, but it was only 7 weeks ago. Oh my, how much has transpired.

That week, as riots, arson, and looting spread in major cities after the death of George Floyd, crowds chanted “Hands Up, Don’t Shoot.”

I pointed out that that slogan, foundational to the Black Lives Matter movement, was not a real thing, Reminder: “Hands up, don’t shoot” is a fabricated narrative from the Michael Brown case.

The Black Lives Matter movement was born of the Michael Brown shooting in Ferguson, Missouri. While the BLM founders started their organizing after the prior Trayvon Martin case, it was Brown and Ferguson which launched the BLM movement into the public spotlight through the protests and riots in Ferguson.

Nothing was more associated with the BLM movement than the chant “hands up, don’t shoot,” based on the narrative that Brown had his hands raised and said ‘don’t shoot’ when shot. That same chant drives protesters and rioters ripping up cities after the George Floyd killing.

I know the history of BLM and how it shot to national fame after the Brown shooting. I followed it closely and wrote about it at the time in 2014. I documented the violent instigators, many of them cross-over anti-Israel activists. See my October 25, 2014 post, Intifada Missouri – Anti-Israel activists may push Ferguson over the edge.

More than anything, BLM seized on the claim that Brown had his hands raised in surrender, saying “don’t shoot,” at the time he was shot by officer Darren Wilson. “Hands up, don’t shoot” became the signature slogan of BLM.

But it was all a lie. Brown wasn’t surrendering and didn’t say don’t shoot. And he wasn’t a victim of police misconduct. Rather than the “Gentle Giant” he was portrayed at in the media, he sucker punched Wilson while Wilson sat in his police car, tried to grab Wilson’s service pistol, and was shot when he charged Wilson a second time.

I linked to the Obama-Holder Justice Department report confirming the above.

For me to state and document the fact that Michael Brown was not shot with his hands up and didn’t say ‘don’t shoot’ was considered an act of heresy. It was considered “deeply upsetting” by some students. You know some of the rest of the story.

To quote Ben Shapiro, facts don’t care about your feelings. To quote another saying, wrongly attributed to George Orwell, “in a time of universal deceit, telling the truth in a revolutionary act.” [I warned you about possible triggering, so don’t blame me it you can’t sleep tonight.]

In the past seven weeks, many others also have pointed out that “Hands Up, Don’t Shoot” never happened. Yet, BLM and other protesters still are chanting that slogan.

Just a few days ago in Portland, a large crowd of Antifa “Moms” and others, who definitely were not socially distancing, chanted “hands up, please don’t shoot” with their phone lights on.

Portland crowd singing “hands up, please don’t shoot me” with their phone lights on. pic.twitter.com/dqOgRJrM3Z

“Michael Brown never said these words. But in a cult, none of that matters. Narrative not truth, remember?”

Hah, just wait until they try to cancel Sullivan. Oh wait, they already did that, even before his latest comment:

What has happened, I think, is relatively simple: A critical mass of the staff and management at New York Magazine and Vox Media no longer want to associate with me, and, in a time of ever tightening budgets, I’m a luxury item they don’t want to afford. And that’s entirely their prerogative. They seem to believe, and this is increasingly the orthodoxy in mainstream media, that any writer not actively committed to critical theory in questions of race, gender, sexual orientation, and gender identity is actively, physically harming co-workers merely by existing in the same virtual space. Actually attacking, and even mocking, critical theory’s ideas and methods, as I have done continually in this space, is therefore out of sync with the values of Vox Media. That, to the best of my understanding, is why I’m out of here.

Two years ago, I wrote that we all live on campus now. That is an understatement. In academia, a tiny fraction of professors and administrators have not yet bent the knee to the woke program — and those few left are being purged….

See, if I made up a false but catchy slogan, tied it to a ‘social justice’ movement, and got enough people to believe and chant it, I too could be popular on campus.

Welcome to the post-truth world.

There is one positive coming out of this. Hundreds of young otherwise-foolish people have been informed that in the event of a police encounter, putting your hands up and not grabbing for unknown items will extend your lifespan. With that in mind, even if the police have to endure being yelled at with “Hands up, don’t shoot” during the entire encounter, they should be appreciative that other dangerous reactions to their presence are being suppressed. (This also prevents them from spitting profanity, screeching about how their rights are being violated, and calling the police officers names)

notamemberofanyorganizedpolicital in reply to georgfelis. | July 24, 2020 at 10:53 pm

Yeah, we need to pass legislation to fund these little assholes

He’s right on that

I keep wondering: when will all of this either really blow up into full-fledge live-ammo street battles, or end?

I don’t think enough people on the other side of this are willing to do much push back other than voting.

Don’t count on the GOP for ANYTHING other than stabbing us in the back.

On the plus side, the Hands Up, Don’t Shoot Mike Brown scenario is the easiest to conclusively disprove.

Obama sent an army of FBI agents and US attorneys to “get that cop.” The facts were so clear that even they gave him a pass.

The family hired (with whose $$?) their own forensic specialist who also confirmed the police officer’s story.

But the media ignored all that and repeats this lie forever and ever.

And where is Darren Wilson now? Last I heard was years ago, when he was unemployed and unemployable, and having to live in hiding. So it looks like, evidence or no evidence, they “got that cop” all right anyway.

I never understood why he voluntarily resigned his job, with no payment. It didn’t make sense. If they wanted him gone they should have had to pay him his entire expected earnings for the rest of his working life. They should also have had to provide him with protection for as long as he was in danger, just as they do to others who get death threats.

IMO- it’s no coincidence that cases peaked in the weeks leading up to pandemic UI running out. and so many false positives and so many non-covid deaths being labeled. I call bullshit, chains are being yanked to extend the pandemic UI benefit.

I guess the phone thing makes them peaceful. You know like the movies? Like ‘Deck the Halls’?
That is what this is about. A photo opportunity orchestrated by the Democrats now that the riotous looting violence is leaking out of the seams of the MSM censorship lock box.

To be honest, Downtown was already ruined by the homeless several years ago. I am a couple of miles east of the river and it is hard to tell wheter the occasional bang is the po-po or post 4th fireworks. The kids are treating it like a huge party because they are bored. I hear the governor is going to order bars closed at 10PM so the rioting can get an earlier start. Midnight is way to late for the old folk.

I chat with people to see where they are and do my grassroots influencing. and despite the medias constant work, the concensus seems to be that pretty much everyone is coming off like a petulant 3yo. Wheeler getting a taste was pretty satisfying.

Those RIOTERS must be stopped from molesting and murdering children. (Remember everyone below 21 is a minor.)

Fyi, Democrats revealing their plans for this fall’s election.

Herman Goebbles wouldn’t be surprised at the power Leftists have.

Is that a cross between Hermann Göring and Joseph Goebbels?

I am a worrier by nature. I hope this article doesn’t come back to bite the good Professor… Then again, maybe that is exactly the point.

BLM are fostering a lie, there is nothing to run and hide about.

As far as I can tell, none of the “fact check” sites have an opinion about the truth of “hands up don’t shoot”. Not even an incorrect one.

When your entire movement is base in fantasy, relating facts is meaningless. Intentions are supreme and drive everything.

All I’m asking for from BLM is a little honesty.