“to shrink away from this challenge would be a huge mistake”

“to shrink away from this challenge would be a huge mistake”

My interview on The Daily Signal Podcast: “So I do feel a bit of an obligation to continue to speak out for [students who are afraid to speak out], because there’s nobody else to do it at this point in time, certainly not at Cornell Law School.” 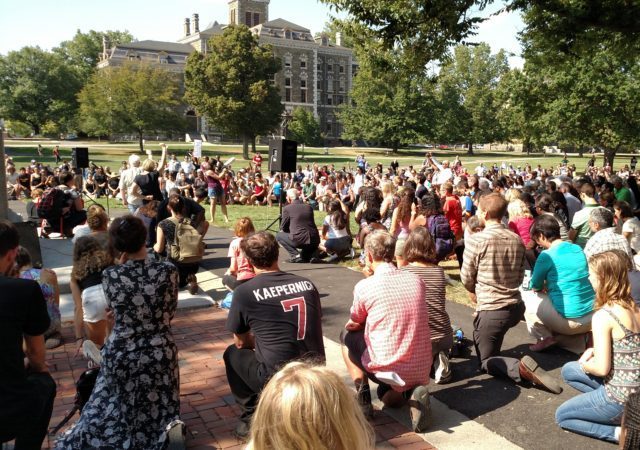 I was interviewed by Virginia Allen for The Daily Signal’s podcast regarding the issues I’m facing at Cornell Law School, and issues facing academia and the nation more generally regarding the Black Lives Matter Movement.

You can listen to the full podcast and read the full transcript at The Daily Signal website, Students, Faculty Target Professor for Writing Honest History of Black Lives Matter.

The Daily Signal, which is part of The Heritage Foundation, links to a Heritage video about the difference between the public perception of BLM as a generalized issue, and the reality of the organized movement:

Much of my interview concerned my writings that enraged some students, faculty, alumni, and administrators. You have read about that before, so I’m not going to excerpt that transcript here (The Daily Signal has the full transcript).

Rather, I’ll focus on the portion of the interview about the more systemic problem and what comes next.

Here’s the audio, with my portion only (the full podcast segment with intro is at The Daily Signal).

Here’s a partial transcript (as prepared by The Daily Signal).

Jacobson: You’re right. There are two different aspects and it actually was a fairly brilliant move by the organizers several years ago to essentially establish a hashtag, a Twitter hashtag, a social media hashtag called Black Lives Matter, but also to establish their own organization, and the line does blur.

So if you ask people, “Do you think black lives matter?” The answer is going to be for 99% of the population, including me, “Yes, of course.” But that is exploited, those feelings of goodwill are exploited by a movement, which does not have goodwill in its heart, the organized movement by people who have used this as a manipulative device.

So it’s very interesting how they have developed a feelgood hashtag, but behind it is a fairly organized structure, and there are multiple structures that tend to exploit things.

Allen: Are there students that are coming to you and saying, “Actually, professor Jacobson, I agree with you”? Or maybe even who are saying, “I don’t agree, but I still respect your choice to speak out and say these things and write these things”?

Jacobson: Yeah. What I have received is really an outpouring of support from students. Many students have written to me assuring me that I have a lot of support at the law school among students, but that it’s very quiet support, that people are afraid to speak up. And I’ve received that message many different ways. So that’s one of the real tragedies of this.

One thing I’ve learned, this is not primarily about me—I mean, I have job security, I have academic freedom as part of my job, the threat to my job is I’m not going to say it’s nonexistent, but it’s not the most substantial thing.

What me being targeted has done is it has intimidated students. It has sent a message to students that on this issue, there can be no dissent, and if you do dissent, you run the risk of being treated the way professor Jacobson is being treated. That’s the opposite of what should be happening at the law school.

The boycott of my classes has also put students in a difficult position because there are many students who want to take my course. My course has nothing to do with politics. It has nothing to do with race. It’s regarding investment disputes and how to handle investment disputes. It’s a small class, but we typically will get three to five, four to five people applying for each available spot. So there’s a strong interest in the course.

But now that a dozen or so student groups have announced not just that they are boycotting the course, but that they’re calling on others to do so, it puts students in a very difficult position because now taking my course could be deemed a political act, that it would be deemed an act against the Black Lives Matter movement if they were to pursue the education they desire, which is a completely nonpolitical education.

So I think you add it all up, you add up the quiet student support, the fear of speaking up, the political litmus test for taking a course, and I think it has been extraordinarily destructive to the atmosphere at the law school and that’s what students have conveyed to me.

Allen: So how do you plan to proceed? Are you going to keep writing and sharing your conservative view?

I think that for me to shrink away from this challenge would be a huge mistake. It’s something I would personally regret forever and I think it would be a mistake for the students because I’ve not only received many student emails, I’ve received emails in the hundreds, the multiple hundreds around the country, because I did have some major media appearances, of people who are thankful that there is somebody who is able to speak out because most people are afraid of losing their job, with good reason.

We’ve seen that across the country that anyone who makes the slightest negative statement about the Black Lives Matter movement, anyone who questions rioting and looting is subject to possibly losing their job.

So I think this is a moment in time where we need more people to be able to stand up, but I recognize most people can’t. I mean, I can’t expect a law student, 24, 25 years old, just about to embark on their career. They know how devastating it would be if there were the sort of things said about them that are being said about me.

So I do feel a bit of an obligation to continue to speak out for them because there’s nobody else to do it at this point in time, certainly not at Cornell Law School.

We’ve seen that across the country that anyone who makes the slightest negative statement about ANYTHING…
is subject to possibly losing their job, their family, even their lives…

make no mistake: this is another marxist attempt to overthrow the republic..

Professor, by doing the right thing in standing your ground right from the beginning to fight this, you are violating the primary Republican governing rule:

Prof. J.
Your voice and convictions are needed more now than ever. In the years since 1964 when I was 18 and having a long marriage, children, grandchildren, and now Great grandchildren, having lived, worked, socialized and been a Republican for as long, I am so grateful for knowing there are many more of my generation and younger who are thankful that there are still people like you who have a platform (L.I.) to voice the sane side of democracy and the freedoms which we benefit from. We’re not a perfect nation, nor are we perfect humans, but your actions and convictions are helping to give hope to all who have kept faith with what we inherited and to stay true to those principles.
Thank You.

It is unfortunate, but not new. I was extremely excited to have been accepted at Cornell in early 1972 with a National Merit Scholarship, particularly because it was only about 20 miles from our farm. But even then the student unrest was palpable (at that time over the Vietnam war, Black Panthers, etc.). Articles of student suicides were all too common in the Ithaca Journal. To the disappoint of my parents, I took a different path and joined the USAF, got a year’s worth of electronics education in seven months (self pace program), and served the remaining four years active duty. I am at my full retirement age today, have made a good living, and am a daily follower of Prof. Jacobson. Godspeed to you for your determination and the example that you are setting for your students.

Radar 416AMS
I too reside outside of Ithaca at 22 miles. Perhaps it is a telling on us who reside in a Republican dominated district that we have been able to hold onto our 23rd Dist. comprised of 7 counties as a Republican Congressional seat for these many years in spite of Cornell’s strong influence in the one Democrat Tompkins County. Not that it isn’t without the challenges of having those who are academically woke and attached to Cornell and reside in the outlier communities to be at our local village and town board meetings with objections on actions, or more so the in-actions not subscribed to by the majority.

Prof., thank you.
It is so important to draw attention to this “blur of lines between the phrase “black lives matter” and the organization BLM (which is marxist and supported by terrorists, as per the founders). There are so many who do not seem to understand this and go about blindly supporting BLM.

Your am American Hero

Thank you sir for your great contributions to our system of justice and to our republic. It is inspiring to see you stand strong in the face of threats to your person and livelihood.

You speak for many who lack the ability to influence the public conversation. We are thankful for your work, your courage, and your godly humility in doing so.

When did academia lose their mission of building an intelligent, educated, strong individual who takes pride in making their own analysis and judgments. I haven’t been on a campus for decades. It seems the majority of these students think like a peer pressured robot.

I support your courage, Professor!!

Professor: You need to watch this clip of President Trump on “cancel culture”. At 39:50 in his speech at Mt. Rushmore. https://www.youtube.com/watch?v=XxMKd1PrO0w