“The suspects allegedly broke both of Mack’s orbital bones, sending him to the hospital for 12 stitches on his face after the melee.” 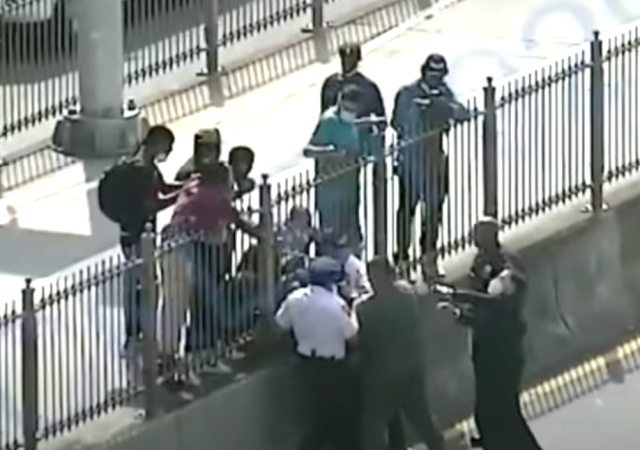 The judge released Campbell without bail while holding Banks Shaborn, the second suspect, on $10,000 bail.

Campbell allegedly attacked Monahan when he attempted to arrest Campbell after he “allegedly punched another NYPD officer and lieutenant near the Manhattan approach to the” Brooklyn Bridge.

Shaborn supposedly attacked the same lieutenant, Richard Mack, “multiple times in the face during the scuffle.”

The suspects allegedly broke both of Mack’s orbital bones, sending him to the hospital for 12 stitches on his face after the melee. Monahan said he suffered some bruises and jammed fingers, but was otherwise fine.

Police said they recovered a Taser from Shaborn’s pocket and a folding knife from his shoe.

Shaborn, who faces assault and criminal possession charges, was held on $10,000 bail.

The brawl happened after social justice protesters went after a pro-NYPD march over the Brooklyn Bridge.

Monahan described the Black Lives Matters movement as “legitimate,” but said, “it is being hijacked by these anarchists, and they are the ones that have been attacking our police officers [and] are out hiding behind the many, many peaceful protesters that are out there.”

This is not peaceful protest, this will not be tolerated. pic.twitter.com/cYuDX8G7ku

These are the injuries our officers sustained. pic.twitter.com/KI9wQKywHH

Shit’s getting real for antifa in pdx.

OMG- the awesomeness. No plea deals and no parole.

When the protesters use their fists the police should use their guns.

This whole Covid ‘lockdown’ is another GIANT swamp scam, with its attendant ‘mask’ conformity.

The no-bail scam is to create more anarchy.

Anarchy is first goal,and curing it with communism is second goal. The third goal is genocide.

i tend to agree, this pics look fishy to me. especially the guy in the white shirt. the “blood” on his face looks as though it was applied. his injuries all originate right at his hairline. the blood itself doesn’t diminish as it runs down his face. some of the spots on his shirt are square! i’ve broken my orbital bone. it hurt like hell and the bruising was nearly instant. i’m not seeing anyone that looks like both bones were broken.

It is appropriate that this thug’s first name is derived from the central text of the supremacist, totalitarian, belligerent and hate-filled ideology of “Submission.”

Lawlessness is part of the prairie fire manifesto. It seems that adherents are deeply embedded at all levels of Government.

The Department of Justice could intervene and charge the perpetrator under Federal Riot statutes. But this is only finger in the dyke. Local governments and proprietorial offices are full of people who do not believe in the United States. People who will not dispense equal justice under the law.

Yes! And they are in it for the MONEY. Much of it American, and much of it communist chinese.

After 16 years of clinton and obama corruption, they want their ticket on the gravy train.

Count Dianne Feinstein and McConnell in as long-time passengers on that train. boehner, too. The GOPe in general.

Same lingo…..The BLM movement hijacked just as they say with Islam. These are core beliefs not stolen.

When police assault the lowly peasants, they’re typically not arrested at all, let alone have to worry about bail.

Does bail acually make any difference? I suspect this level of criminal is going to skip out no matter what.

The idea of bail in the instance of someone this dangerous is to keep them in jail. And if they did pay their way out and got re-arrested, they’d get no bail and they’d forfeit their bail money paid in the first case.

Bail works great to create compliance with the courts and keeping dangerous people locked up.

How long before police decide that, when someone punches your colleague and breaks a bone, he’s dangerous enough to shoot, rather than going through the pretense of an arrest?

Reducing police brutality by incentivizing it. Sure. That makes lots of sense!

When the law is not enforced, the penalty for all crimes is death.

Well, citizens of New York City and State, you voted these people into office. You own every spec of it. Little wonder why so many are moving out of the area.

Yeah – and infesting our communities with their same leftist BS.

The people get the government they deserve. This is a law of nature as immutable as any in physics.

Back in the 1970s a similar situation developed in this country. People who attacked LEOs were routinely released on reduced bail or on their own recognizance. Many were given little or no sentence for violent Physical attacks on police. What Happened? Police began meting out “street justice”. There was a spike in suspects being injured while resisting arrest. It is likely to happen again. If the criminal justice system does not work, then people, including LEOs, will substitute their own justice system.

The only difference being this isn’t the 70s. Any street justice served will only support the opposition’s stance, which is police are thugs killing black people. The media won’t take the LEO’s side and neither will any liberal judge – the same judges letting the criminals, who are beating up the cops, free without bail. No, all street justice will do is amplify the violence. And that’s saying something after a group of “protesters” took delivery of baseball bats, handed them around, and went to Brooklyn Bridge to play whack-a-cop. Not just any cops either. All upper management, who at one point kneeled down to the same protesters that tried to beat their skulls in…

This ain’t the 70s, Mac. I think the only way this really gets resolved is people rising up and confronting BLM, Antifa, politicians and MSM with their lies, violence, and Marxist ideals. We are the only ones that can end this. Peaceful, massive protests and marketplace boycotts – quit using Twitter, don’t buy Nike, stop supporting the NBA/NFL, etc. Money and power are the only currency the left knows. Take both away and they have nothing. If we stay silent and in our homes this will only get worse. There are plenty of things we can do, but the point is WE have to do it.

Not to mention the fact that each and every one of these confrontations is being recorded by dozens of cameras. Every time a cop retaliates, it hits the media.

It is a tactic to attempt to incite reprisal to legitimize the demands against an authority and attract new members to the revolutionary cause. Police need to adhere to the rule of law. By measured restraint and adherence to rule of law, they will show the Marxists for who they are – agitators who mean to destroy public order, incite violence, and harm the people.

By no means do this imply they should bend a knee to those who incite or commit violence and destruction and seek to undermine public order. Indeed it means just to opposite, even when being ordered to do so by corrupt politicians.

It is not an easy job to suffer such hateful physical and verbal insult, and one that is worthy of our admiration.

Would the judge treat these thugs less leniently if he/she had been attacked too?

You can protest over there, but I draw a line at my home and family.

The problem isn’t the judges, it’s the politicians who are pandering to BLM criminals and communists.

‘Monahan described the Black Lives Matters movement as “legitimate,” but said, “it is being hijacked by these anarchists, and they are the ones that have been attacking our police officers [and] are out hiding behind the many, many peaceful protesters that are out there.”’

Oh, shut up you sleazebag crybaby. This is what you get for kneeling to terrorists, you dirty cop.

Is Monahan a liberal from the Progressive Church? He wants… thinks he can abort the baby and that her life matters, too. He is playing with a double-edged scalpel.

Enjoy the fruits of kneeling to the mob, NY.

This is not a NY or CA problem: soros money will see it that these people are resettled in other areas of the US, where they’ll wreak havoc.

in the summer of 2019 it was all about people throwing buckets of water and other things at police and de blasio just watched it happen, fast forward to 2020, it was now baseball bats, bricks and molotov cocktails,
what’s on the menu moving forward?

If I traveled back to my hometown of NYC, I am certain I would be making a fortune standing outside of Gracie mansion selling pitchforks and torches. I’d probably setup shop right next to the tar vendor and the pillow people.

Sons of Liberty must be reconstituted. The Sons of Liberty were especially active in New York State during the 1760s. Their actions were shocking and even I find myself sometimes sympathizing with the targets of their cause. I am particularly drawn to the side, logic and conviction of a Dutch man that the Sons of Liberty dealt with in Albany, New York.

Bring back the Sons of Liberty, their excesses and their tactics are now appropriate. Let history repeat itself.

As long as you’re prepared to deal with the reality of a two-tiered justice system. The big thing that keeps the populace cowed is the knowledge that only the other side has any real rights.

No bail for felony (I assume it was charged as a felony) battery on a LEO? That’s crazy, and will only incite more attacks on LEO.

If these animals can be let off no bail for assaulting a police officer, I’d be walking off the job. I walked away from a specialized LE role over social justice and pc 8 years ago.

When did NY change the law to allow those guilty of violent assaults to be released without bail? Yes one suspect was held, but why not the other?

You mean all that kneeling and hand holding with the protesters a few days ago didn’t keep him from getting smacked in the head? What a surprise.
Let me know when nypd endorses all republicans throughout the state, especially President Trump. Deblasio is mad the thug was released without bail – ho hum. Who was the one pushed for this bail reform in the first place?
Otherwise – yawn,I think I’ll have a Coke.

IMO, ok maybe for the lowest levels of misdemeanor charges on a first time offender. I could see that, barely but ok.

Violent crimes, including property crimes have got to have a cash bail required. Attacks on LEO, which is a symbolic attack on society, should be pretrial confinement only without exception.

The leftists did a thorough job planning out and implementing their assault on our institutions and hamper the ability to respond. Pour money into DA and AG races to elect folks like Gardner in ST Louis and Ellison in Minnesota. Attack cash bail and win the argument across many States.

‘Monahan described the Black Lives Matters movement as “legitimate,” but said, “it is being hijacked by these anarchists, and they are the ones that have been attacking our police officers [and] are out hiding behind the many, many peaceful protesters that are out there.”’

Would have thought a knock on the head would have straightened him out on this. Politics over all.