“I can tell you that crowds are known, particularly when you don’t have a mask, to increase the acquisition and transmission, no matter what the crowd is.” 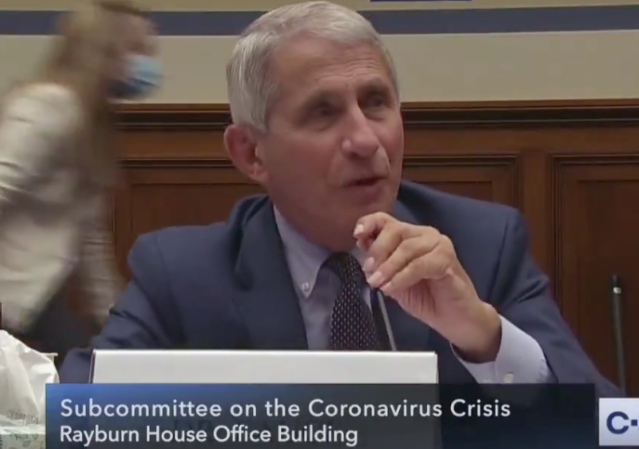 It would be great if could deal with the pandemic from the vantage point of science and actual medical advice instead of politics, and yet…

Dr. Fauci joined the Congressional subcommittee on Coronavirus Crisis Friday where he engaged in a handful of interesting exchanges.

Most notably, Dr. Fauci (and I’m sure to the chagrin of Trump’s detractors) indicated the federal government was actively working in every way to combat the spread of coronavirus while working to find an effective treatment.

To the huge disappointment of the leftist media, Fauci stated that the federal government is doing EVERYTHING they can to combat, control, and treat the coronavirus. So @realDonaldTrump has been doing a good job mobilizing the govt and private industry to fight this virus.

Trump also worked with the heads of major retail chains early on to ensure essentials were readily available to the public.

Rep. Jim Jordan tried to pin Dr. Fauci into a corner by attempting to elicit an admission that protesting is dangers. Fauci didn’t go quite that far, but did say “I can tell you that crowds are known, particularly when you don’t have a mask, to increase the acquisition and transmission, no matter what the crowd is.”

Dr. Fauci kept refusing to “opine” on the safety of mass protests during a pandemic outside of saying that being part of a crowd increases your risk of catching the Rona.

Had Rep. Jordan played this a bit better, he may have been able to get a tad bit further, but the point remains that so much is shut down for our “safety” whilst rioters run amok with the blessing of a political party and the media (not) covering their activities. This particular point is one that will surely resonate outside of the political bubble as the hypocrisy by local, state, and federal officials in controlling protests vs. the activities of others is inescapable and to many, upsetting.

But Democrats encourage people to riot and protest in the streets. pic.twitter.com/78Dyjkt6D6

Fauci was also optimistic about the progress towards a vaccine while CDC Director Robert Redfield went on record saying it’s in children’s best interest to resume in-person. “Yes, I think it’s important to realize that it’s in the public health best interest of K-12 students to get back in face-to-face learning. There’s really very significant public health consequences of the school closure.”

When is this weasel going to get fired?

You mean only objective outcomes matter and not good intentions??

Nothing like doing a little sidestep. You not in a position to tell people what to do?? Isn’t that all you do?

Doesn’t matter. With Fauci, as with most politicians, whatever he says has a shelf life of nanoseconds.

I think that Dr. Fauci is trying to stick to science and to avoid getting in the middle of various controversies. Also, I think that most protestors understand the risk of catching COVID-19 from protesting. The protestors accept that risk because they believe the issues at stake are more important. That is the idea behind the design of many protests — the demonstrators want to break the norms of society whether it is a health norm or a traffic regulation.

Dr Fauci, is that you?

Doesn’t that same logic apply to churches gathering? Or do only leftists causes get that special exemption?

That’s a good one.

When do we pull the other finger?

You’re right, Kemberlee. Rep Jordan was a smidgen devious, forensically naughty, in one respect during his otherwise admirable, and at some moments dramatic and critical, questioning and debate that evolved clearly into a verbal tussle with Dr Anthony Fauci.

My take is that the subcommittee member from Ohio, well known for his pugilistic, sometimes ferocious, yet often triumphant style of questioning and debating witnesses at House hearings (he used to coach wrestling at Ohio State prior to attending law school) committed a rhetorically self-bruising faux pas in the following manner:

He repeatedly attempted to have the high-profile IAID director and regularly spotlighted expert advisor to PDJT’s Coronavirus Task Force accept and respond to his slippery substitution of the narrower, and far more politically risk-laden term, “protesters” for Dr Fauci’s clearly preferred term, “crowds”.

Rep Jordan’s central focus, his match-defining hold, if you will, initially, and very technically — that what Dr Fauci said in the past concerning the avoidance of the unqualified genus “crowds” is tantamount to his issuing the same warning to “protesters,” a species of that genus — sought an answer to the logically based, entirely fair and sensible question, “Do protesters increase the spread of the virus?”

The rest of the questioning and answering between the two is contentious dispute over the use of the congressman’s term “protesters” when Dr Fauci used the term “crowds” in his official, public-health pronouncements. Is it a distinction with a meaningful difference? Epidemiologically, it doesn’t seem to be; however, you can bet your new, high-style face mask that to Dr Fauci, the political risk of finding no meaningful difference between the two, and answering Rep Jordan’s simple and direct question in the scientifically valid affirmative, was a scandal too hot to start — and cleaqrly, a potential embarrassment for his Dem-Left-Globee fellow partisan/travelers, no less for himself.

Rep Jordan “won” the match, but perhaps less so than he would have done had he avoided using the part for the whole — an inferred member of the unqualified class, rather than the class itself, spoken.

In pushing “protesters,” the more controversial special part, for the blander, safer, more genial whole, “crowds,” Rep Jordan, according to Dr Fauci’s sharp and resistant discontent, was “putting words in [the doctor’s] mouth”.

In sum, while Mr Jordan was truly doing his job in attempting to to have Dr Fauci recognize — and while owning up to, possibly reconsidering his tacit disregard of — the public-health risks associated with the close-standing activity of recent protesting allegedly related to the Michael Floyd incident involving Minneapolis police, he came off appearing a bit disingenuously tricky, forceful, and even a little bully-like as he postured himself against Dr Fauci’s clear and certain insistence not to take responsibility for his own, previous advice to Americans not to gather in close crowds.

Rep Jordan successfully demonstrated that to the subcommittee and the viewing American public, much to the chagrin of the star witness; however, he would have succeed better, IMHO, had he not pulled a wrestler’s slight of hand by his verbal maneuver. It was gratuitous and didn’t add points to his final score.

Why Dr Fauci steadfastly refused to accept Rep Jordan’s synecdochically argued term “protesters” is evidence enough for me that the giant public-health research doctor didn’t like the taste of his own medicine.

When you speak publicly and you do so disingenuously, you’ll have to face others who know pretty well how to wrestle in the ring. That’s what seems to have happened at the congressional hearing.

Clarification: I use “gratuitous” for the reason that it was
unnecessary — in the sense that the representative was free to use a different, less “gotcha now” approach, which undoubtedly allowed the witness to prevaricate so much, allowing him to stall his obligation to answer Mr Jordan’s direct and fair question at the start of the engagement — and not because, as I have argued above, it was either unwarranted or unjustified or both; in clear point of fact, it certainly was.

I therefore admit a diction error and retract “gratuitous”; its full meaning is broader than to squarely fit the facts here. The right word is just its narrower meaning, “unnecessary,” and sorry for any moment of confusion I may have caused you.

In the end, a win is still a win, even if on paper. He did get Fauxchi to admit that “crowds” were not good regardless of how those crowds formed.

He has positioned himself to politicized his talking points for left, right and down the center. He hedges with words chosen to meet the answers that his interviewers are looking for. Why both sides of the question are paying him fees to be on their “news ?” shows.
I’ll still stick with the reports coming from the W.H. i.e. VP Pence & Pres. Trump. The facts are released as found and shared. This illness and cure is an ongoing fluid situation and subject to changes. Nothing is written in stone and for those who can’t accept that, are going to be yelling the loudest. Why the Blue States are in battle, they can’t control the situation or the outcomes. Yet it’s hard to believe they would have dealt with it any differently or worse than they have handled the previous 3 1/2 years demonstrating they can’t even control themselves.

notamemberofanyorganizedpolicital | August 1, 2020 at 3:27 am

Give that “vaccine to the public officials first and make sure its the same vaccine we peons get.

notamemberofanyorganizedpolicital in reply to fullauto. | August 1, 2020 at 1:24 pm

notamemberofanyorganizedpolicital in reply to fullauto. | August 1, 2020 at 1:38 pm

Next Time You’re Called A “Crank” Or “Flat Earther” On Concerns About A ‘Rushed’ Coronavirus Vaccine, Show Them This

Spot on, Guard. Nothing wrong with your vision.

In a perfect world where honor, reason, mindfulness, community, and an earthy love for the rule of law and a self-regulating diligence toward decency and professional standards, etc, are normal and routine, that would be the expected outcome in such cases of clear and distinct practice-standard and general legal-code failure.

How far we’ve fallen from such a state of grace — if it even ever existed as close to the ideal as we like to romanticize it did.

I’m a retired and recovering, once-licensed healthcare professional. I can assure you, it’s as bad as this case makes it seem — sometimes, even, far worse.

My overall condition has substantially and dramatically improved since retiring. I’ll simply leave it at that.

Stay in the ring with me and the others. It’s really gonna get interesting, I’m sure you can tell already.

Clarification: I use “gratuitous” for the reason that it was
unnecessary — in the sense that the representative was free to use a different, less “gotcha now” approach, which undoubtedly allowed the witness to prevaricate so much, allowing him to stall his obligation to answer Mr Jordan’s direct and fair question at the start of the engagement — and not because, as I have argued above, it was either unwarranted or unjustified or both; in clear point of fact, it certainly was.

I therefore admit a diction error and retract “gratutious”; its full meaning is too broad to fit the facts here. The right word is just its narrower meaning, “unnecessary,” and sorry for any moment of confusion I may have caused you.