Will the Country Vote Red for Trump or Red for Socialism? 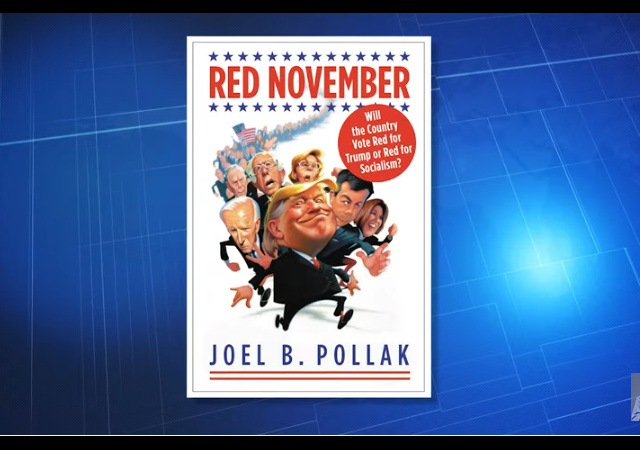 Amid continuing civil unrest, social justice antics, and pandemic coverage, it may be hard to recall the Democratic Party’s primary season and the impeachment process that occurred in the early months of this apocalyptic year.

However, as we gear up for the November election, savvy Americans will want to refresh their memories…especially of the continuing socialism-oriented trends entrenching themselves in the Democratic Party platform. One excellent place to start the review process is with the new book, Red November: Will the Country Vote Red for Trump or Red for Socialism?, by Joel B. Pollak.

Pollak is a former leftist activist, who has now become a senior editor-at-large at Breitbart News and a co-host of Breitbart News Tonight on Sirius XM Patriot. He has a perfect position to cover the Democratic primary process and analyze the increasing rate of devolution in the party’s priorities.

Red November is an engaging and informative account of the entire primary season and gripping history of the impeachment of President Donald Trump. Pollak captivates the reader with descriptions of his interviews with candidates, as well as interactions with their staff, Democratic voters, and media members.

Perhaps the aspect of “Red November” I enjoyed most was when Pollack chronicles precisely how the Democratic candidates wandered rapidly down the road of socialist policies. He steps back from the minutia of the primary process and provides us a critical overview.

Pollak’s recounting of the townhalls during the primary season exemplifies this intriguing facet of his overall theme:

In September 2019, for example, CNN held a town hall on the topic of climate change. Governor Jay Inslee had pressed the DNC for a climate
change– centered debate; he dropped out of the race in August, but CNN picked up his idea.

For seven hours, displacing regular afternoon and evening news programming, CNN hosted the candidates in its New York studio, where
they seemed to compete with one another to propose the most outrageous idea. Andrew Yang talked about forcing Americans to drive electric
cars. Kamala Harris talked about banning plastic straws— a topic that had nothing to do with climate change. Several supported a “carbon tax”;
most wanted to ban fracking, which has actually reduced carbon emissions; and only Yang and Booker defended nuclear energy. The most
radical proposals earned the most applause; there was no room for moderation. Joe Biden drew attention for a burst blood vessel in his left eye that turned it a frightening dark red.

At a similar event in October, just days before the Ohio debate, CNN held a town hall in Los Angeles devoted to LGBTQ issues. The answers
from the candidates were radical enough: Elizabeth Warren, for example, applauded a 9‑year-​old who claimed to be transgender.

But audience was even more ambitious. Anderson Cooper was busy interviewing Pete Buttigieg when activists interrupted from the audience: “Trans people are dying! Do something!” Some members of the audience applauded, chanting, “Trans lives matter!”

During Beto O’Rourke’s turn, a black transgender woman, Blossom C. Brown, seized the microphone from a female audience member who was attempting to ask a question. “Black trans women are being killed in this country, and, CNN, you have erased black trans women for the last time!” Brown said.

The leftists were not pandered to enough during the primary season…so we will continue to experience unrest and disruptions for the remainder of the 2020 election cycle.

One of the problems I find with authors who blog regularly is that their books are often nothing more than a compendium of their posts. Happily, Red November is an original piece of extraordinarily thoughtful and well-presented analysis. I have given it five stars out of 5 and recommend it strongly to anyone who enjoys political history. The book is officially being released on July 14, 2020.

If you are interested in the author’s take, here is Pollak being interviewed by Larry King on PoliticKING.

We can not grow complacent.

democrat cities being destroyed by their failed policies and leadership. No major democrat party figures have come out against the rioting, violence and killings. They actually spout off more disastrous policy plans such as defund the police. So far the democrat party has had almost everything boomerang on them since PDJT’s election. Everything they touch turns to sh!+.

notamemberofanyorganizedpolicital in reply to CKYoung. | July 6, 2020 at 11:02 pm

That’s for sure – DEMS have the reverse Midas Obama touch.

Rebecca Barr (Keyboard Warrior for Trump)
@
So, my best friend, who works for a large pharmaceutical company just shared this with me.

One of her co-workers, is on vacation in Texas, and she and her sister were at the community pool. They started talking to a gentleman there who works in a testing lab.

He said that he’s baffled by the strong uptick in positives, like someone is pushing for the “second wave”.

So, he decided to purchase 200 test kits himself and submit them to a competing lab to see what happened.

He didn’t actually “test” anyone, just made them appear tested.

Sure enough, over 50% of the UNTESTED test kits turned up as POSITIVE.

The country will go Trump Red if they are well read.

The country will go Red Socialist if they fall for the riot act.

That is what makes Parler.com so important and the tech wars.

TheFineReport.com in reply to notamemberofanyorganizedpolicital. | July 7, 2020 at 12:55 am

But his mind is zapped. He’ll be president for about a week if he’s elected, then moved into the basement.

If biden wins, we are doomed. Literally: whoever controls him will make our lives miserable, if not deadly (he won’t be in office 5 minutes after he’s elected).

If PDJT wins, we have hope, but half the nation is against itself, and about half of the people purportedly on ‘our side’ are against us (the steve schmidts, romneys ,etc.).

We really need to consider a future separated from the rest of the nation. We’ll be much happier and secure.

notamemberofanyorganizedpolicital in reply to TheFineReport.com. | July 7, 2020 at 12:43 am

DEMS and Never Trumpers, all going down.

‘She has copies of everything Epstein had.’ Ghislaine Maxwell ‘has secret stash of pedophile’s sex tapes’ that could implicate world’s most powerful and ‘will try to use them to save herself’

Harvard can bend over and kiss it’s assets goodbye.

MattMusson in reply to notamemberofanyorganizedpolicital. | July 7, 2020 at 7:45 am

Separating Harvard from all that CCP money is like building a wall between the Hog and the Trough.

As maybe, say, a basic Guide for the Perplexed to complement Joel Pollak’s highly informed view of the Fall election (as discussed above, including his interview with Larry King), I urge anyone whose outlook re the veil-removing events of “this [, a truly] apocalyptic year” might waver between too rosy, on the one hand, or even too gloomy, on the other — in other words, any or all of us, now and then, these days — to read this:

It immediately corrected my spine while enhancing my resolve to really, seriously dig in for what all the evidence and the more reliable, sensible narratives point to: a most serious culture, maybe even an actual shooting and thus civil war for — just as Pollak would seem to readily agree in his most civil and cogent way, without exaggeration — the very nature and soul of our nation.

It’s getting late. We’ve got to act, organize and cohere now, and decisively. I, for one, am all in, and, therewith, appreciate Leslie’s recommendation of Joel Pollak’s new book, which I plan to buy in a week.

It all depends on the state of our economy come October. If it is improving then Trump may win. The riots etc will be tuned down by the managers of these performances.

Republican brand’s in the low 40s now and falling. There’ll never be a Republican president or Congressional majority again.

The “Republican brand” is almost always polling low. What pray tell is the Democratic brand?

Free stuff and no requirement for adults to take responsibility for their own actions, plus moral relativism and now objective fact relativism(168 genders and so forth). That’s the Democratic brand.