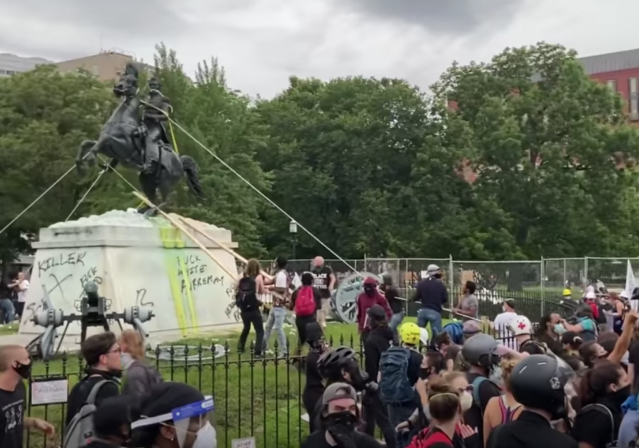 Thursday, Jason Charter was arrested and charged with destruction of federal property. Charters is accused of being what authorities are calling the “ringleader” in an attempt to destroy the statue of Andrew Jackson located in Lafayette statue near the White House.

Law enforcement sources tell Fox News that Jason Charter was arrested at his residence Thursday morning, without incident, and charged with destruction of federal property. He was arrested by the FBI and U.S. Park Police as part of a joint task force.

These sources add that Charter has connections to Antifa and was in a leadership role on the night of June 22 when a large group of protesters tried to pull down the statue.

“They were very organized,” a federal law enforcement official said. “Charter was on top of the statue and directing people … they had acid, chisels, straps and a human chain preventing police from getting to the statue.”

The FBI’s criminal complaint against Charter attaches screengrabs of local news videos and accuses him of also being involved in the destruction of the Albert Pike Historical Statue in Washington this month.

Citing local news video, the FBI alleges that Charter is seen “standing over the toppled Pike Statue, pouring an unknown liquid onto the statue.”

The complaint said: “He is then observed waving others away from the statue, and squatting down behind the statue where his hands are not visible. Seconds later, the statue catches fire. Charter is seen standing over the flames as it burns.”

Earlier this week, four other men were arrested in connection to the destruction of the statue. From the WaPo:

A 20-year-old student at George Washington University made his first appearance in federal court Monday after being charged with damaging a statue of President Andrew Jackson in Lafayette Square last week. He was released on his own recognizance, and a judge declined a government request that the student wear an electronic tracking device.

Court documents show that U.S. Park Police scanned local television news footage, D.C. police body-camera footage, YouTube video, and Facebook and Twitter posts for clues to the identities of those who tried to pull down the statue on June 22. Park Police Sgt. Carl R. Holmberg wrote in an affidavit that he observed the protest and noted that “historic cannon carriages at the base of the statue were irreparably damaged, that some parts of the statue were bent and other parts of the statue sustained damage from blunt objects and chemicals.”

The National Park Service estimated the replacement and repair cost for the statue at $78,000, Holmberg said. The Park Police issued 40 different posters featuring photos of those involved in the protest, hoping to identify the alleged vandals.

Four men were charged with destruction of federal property, which President Trump has noted carries a 10-year maximum prison sentence: Lee Michael Cantrell, 47, of Virginia; Connor Matthew Judd, 20, of the District; Ryan Lane, 37, of Maryland; and Graham Lloyd, 37, of Maine.

Judd was the first to be arrested, on Friday, and authorities said the other three have not yet been apprehended. He appeared in D.C. Superior Court on Saturday and was ordered detained while the case was being transferred to federal court.

The Protecting American Communities Task Force will coordinate assets inside the department in protecting monuments, memorials, statues, and federal facilities.

“DHS is answering the president’s call to use our law enforcement personnel across the country to protect our historic landmarks,” Acting Homeland Secretary Chad Wolf said in a statement.

“We won’t stand idly by while violent anarchists and rioters seek not only to vandalize and destroy the symbols of our nation, but to disrupt law and order and sow chaos in our communities.”

Rioters and vandals have increasingly targeted statues and other monuments in recent weeks, including statues of George Washington and Ulysses S. Grant.

DHS’s Office of Coordination will also work closely with teams at the Departments of Justice and Interior to share information and intelligence.

“As we approach the July 4th holiday, I have directed the deployment and pre-positioning of Rapid Deployment Teams (RDT) across the country to respond to potential threats to facilities and property,” Wolf said. “While the department respects every American’s right to protest peacefully, violence and civil unrest will not be tolerated.”

those two lawyers in NYC have plenty of free time right now, they can work on his case

No statue of imitations claim can be made on this marvelous arrest. 😎

At a time when we get hit over and over with terrible news and where vicious people get away with vicious acts, this is a light shining in the darkness.

Maybe there is hope.

80k damage? That figure is hugely lowballed. Repairing the gun carrages alone will cost $150k+. A wheelwright craftsman making historically correct carrage wheels as set pieces for a park in front of the White House? Yeah. Not a cheap affair. The hand picked wood alone will run in the thousands of dollars.

This slime bucket is a real piece of work.

There was some background I read of him, he has not really had any steady job, yet is able to travel around the country. He is a fascist Antifa higher up.

He had been handing out Russian Flags with Trump’s name on it at a rally event prior to the last election.

I am hoping he lands in jail for a long time, but knowing our “justice” system, he will probably just get community service and be back out on the streets to incite more mayhem.

And in other but related news…

Minnesota Gov. Tim Walz has asked President Donald Trump for a federal disaster declaration to deal with damage from the late May rioting in Minneapolis and St. Paul.

So the MN Dems let the rioters burn down the city and taxpayers in Texas are to get the Governor and the Mayor off the hook.

This was supposed to post at the top level. Operator error.

“…he has not really had any steady job, yet is able to travel around the country. “

Must be someone that can give him a more permanent solution, he has earned it.

No need. IMO, most of these spoiled mommy’s boy and girls haven’t been held accountable before nor faced true consequences for their actions. That’s a big factor in explaining their behavior. They have always been able to skate, their parents, teachers, administrators and all the other supposed adults in their lives facilitated, encouraged and endorsed them.

For the first time in their lives they are coming to grips with the idea of consequences and repercussions. I have no doubt that some of the over 100 persons the DoJ has charged in connection with anarchy so far, will be unable to accept this. Those who don’t commit suicide are unlikely to do well in adapting to prison life.

I learned about this in 8-9th grade, at a time when I was still uncertain about which dissipline I was most interested in. Eventually theoretical and astrophysics won.

It seems likely that George Soros is ultimately one of the major players behind this, along with Iran, Russia and China.

We really need to get to the bottom of who the players are, and make them very sorry.

There is room at Guantanamo Bay, seems like a good idea to deal with characters like Jason Charter there.

I learned about this in 8-9th grade, at a time when I was still uncertain about which dissipline I was most interested in. Eventually theoretical and astrophysics won.

It seems likely that George Soros is ultimately one of the major players behind this, along with Iran, Russia and China.

We really need to get to the bottom of who the players are, and make them very sorry.

There is room at Guantanamo Bay, seems like a good idea to deal with characters like Jason Charter there.

I’m going to guess the idiots that spraypainted the base don’t realize how easy it is to parge over that area.

He was released on his own recognizance, and a judge declined a government request that the student wear an electronic tracking device.

Yes, always nice to see that our (very expensive) judicial system is on top of things.

Though $78k for the repair job seems low.

When people are being incited to mindless hysteria, you need to do three things:

1. Remove the inciters. I won’t ask how you do it.

2. Give the hysterical mob a massive SHOCK to break them out of their deranged mental state.

3. Make it clear that no further incitement or mob violence will be tolerated, and back up words with deeds.

On the spot electro convulsive shock therapy. If anyone dies, so be it, there are medical schools in DC looking for fresh cadavers.

From what I understand, that can be a prosecution ploy against this type of low-life twit. They have no self-control or respect for authority, and actually prosecuting the case is going to be a royal pain, BUT if you give them a little rope (or in this case, an ankle bracelet and a scheduled check-in), they will almost certainly break the conditions of their parole and find themselves in jail with no chance to get out until the case is over. At that point, the prosecution has leverage over the creep. Sure, go ahead and fight the charges for the next three years while you remain in jail. OR you can take this nice, juicy plea deal, grovel a little before the judge, and we’ll sentence you to time served and a few years of parole, and THIS time you’ll obey the rules, won’t you?

How about he disappears and ends up at Guantanamo Bay detention camp?

Any federal criminal law practitioners here? If so, pray tell, do they have motions for change of venue? D.C. has too many lefties in the jury pool.

I’m serious; if anyone here knows federal criminal procedure, please pipe up on this.

Suppose you got it moved out of D.C., but where? Northern Virginia? Not much better. Personally, I recommend bringing the indictment where it happened. If the local jurors won’t convict so be it. That, nullification, is part of our system.

Of course if the locals are OK with lawless, violent mobs creating anarchy and burning, looting etc then that means any requests for federal financial aid as a result are disingenuous and should be ignored.

So a human chain surrounded the statue and they had enough time to throw straps and chains and get people pulling. Why was there not tear gas thrown in, or police with riot shields and batons clearing them out. Until people fear pain associated with vandalizing statues, it will continue.

It will be interesting to see if any major media decide to report that some of these destructive nihilists are being arrested. I’m not counting on it.

Yeah, but he does a great Peter Lorre imitation.