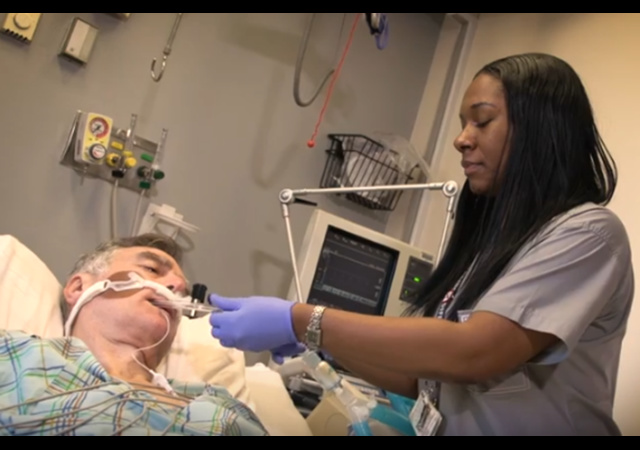 During the initial phase of the Wuhan Coronavirus epidemic in this county, there was a significant emphasis on ventilator production and distribution.

Now, New York’s most extensive hospital system is planning to conduct a robust study of its use of ventilators while treating coronavirus patients to determine if they were effective…or made the situation worse.

The study comes as experts have raised concerns that an over-reliance on the machines may have actually cost lives.

For so many sick COVID-19 patients, getting attached to a mechanical ventilator was a death sentence. More than two-thirds of the patients in Northwell Health facilities hooked to ventilators died in March and early April and the fatality rate was similar at other hospitals.

At the beginning of the pandemic, health officials were worried whether there would be a shortage of ventilators to intubate COVID patients with serious breathing and lung problems. But then discussion in the medical community turned to whether the machines were being overused and possibly contributing to a higher death rate.

“One theory is if you put some patients on a ventilator, you might irritate the lungs more. That’s a theory we’re looking at,” Dr. Thomas McGinn, Northwell’s senior vice president and deputy physician-in-chief, told The Post.

As medical professionals have time to review all the data related to coronavirus infections, it appears that men were more vulnerable to fatal complications.

The U.S. male-to-female ratio of confirmed Covid-19 deaths is running about 54 to 46, but the imbalance is much greater among younger people, meaning men are losing many more years of life.

Global Health 50/50, a group devoted to equality of the sexes in health, finds that “in most countries, available data indicates that men have been upwards of 50% more likely to die following diagnosis than women.” The disparity probably has several causes. In the U.S., men have more health problems to begin with but get less medical care. And women appear to have stronger immune systems.

New hydroxychloroquine study: Early outpatient treatment is the most effective

While the “Trump-touted” hydroxychloroquine isn’t a cure-all, the evidence indicates that it can be helpful when given during the early stages of infection.

According to a new study published in American Journal of Epidemiology, early outpatient treatment is the most effective for treatment of coronavirus patients. The study, which was led by Dr. Harvey A Risch of Yale University, suggests that late stage studies missed the point about effective usage of hydroxychloroquine. Dr. Risch says immediate and early ramping-up of treatment for high-risk COVID-19 patients is key to controlling the coronavirus pandemic crisis.

To date, more than 1.6 million Americans have been infected with SARS-CoV-2 and >10 times that number carry antibodies to it. High-risk patients presenting with progressing symptomatic disease have only hospitalization treatment with its high mortality.

According to the abstract of the study, which has not yet been peer-reviewed, Dr. Risch said an outpatient treatment that prevents hospitalization is desperately needed. To date, two candidate medications have been widely discussed: remdesivir, and hydroxychloroquine+azithromycin. “Remdesivir has shown mild effectiveness in hospitalized inpatients, but no trials have been registered in outpatients. Hydroxychloroquine+azithromycin has been widely misrepresented in both clinical reports and public media, and outpatient trials results are not expected until September,” Dr. Harvey A Risch of Yale University, said.

Public officials, noting the lack of social distancing and masks, are now concerned about the spread of coronavirus in the wake of “protests.”

Officials around the country have said they are concerned that mass gatherings in the wake of George Floyd’s death will contribute to the spread of COVID-19.

On Sunday’s episode of Meet the Press, Washington, D.C. Mayor Muriel Bowser expressed her fears about the potential for a jump in coronavirus cases in her city.

“In fact I’m so concerned about it that I’m urging everybody to consider their exposure if they need to isolate from their family members when they go home and if they need to be tested, because we have worked very hard to blunt the curve,” Bowser said. She noted that only some demonstrators practiced social distancing and wore face masks.

I am thinking people who loot and riot aren’t going to self-isolate and get followup tests.

An Italian doctor says that the novel coronavirus is losing its potency and has become much less lethal.

“In reality, the virus clinically no longer exists in Italy,” said Alberto Zangrillo, the head of the San Raffaele Hospital in Milan in the northern region of Lombardy, which has borne the brunt of Italy’s coronavirus contagion.

“The swabs that were performed over the last 10 days showed a viral load in quantitative terms that was absolutely infinitesimal compared to the ones carried out a month or two months ago,” he told RAI television.

Italy has the third highest death toll in the world from COVID-19, with 33,415 people dying since the outbreak came to light on Feb. 21. It has the sixth highest global tally of cases at 233,019.

However new infections and fatalities have fallen steadily in May and the country is unwinding some of the most rigid lockdown restrictions introduced anywhere on the continent.

Officials say “OK” when thousands take to the streets for arson, looting, and vandalism, but they’ll say it’s terribly unsafe to attend a baseball game.

The whole thing was a scam.
Fauci is a useful clown.

notamemberofanyorganizedpolicital in reply to TheFineReport.com. | June 1, 2020 at 1:58 pm

He’s a lifelong Crook in my opinion.

1. Germany’s federal government and mainstream media are engaged in damage control after a report that challenges the established Corona narrative leaked from the interior ministry.

What a shame it would be if all the looters and Soros-ites (rhymes with parasites) contracted the virus as the rest of the world emerged from the pandemic. Boo hoo.

Count Jeff Bezos in the Soros group. He’s probably giving more money to destroyers of our nation than soros ever dreamed of giving.

notamemberofanyorganizedpolicital in reply to TheFineReport.com. | June 1, 2020 at 1:59 pm

It would be a bigger shame if they bring it to Soros’ door and give it to him while they pick up their pay for these riots. I am sure I will shed a few tears should that happen to him… or maybe I’ll just go have a beer.

could a man-made laboratory virus strain be genetically “programmed” to lose potency over time?
got to give those chinese a lot of credit

Sorry mister, I thought I hit the reply button and it down voted instead!

I think the plan was to kill
Off the 20 million of us, cause chaos and mayhem, waltz in and take over, so you would want the virus to die so as to not infect your troops

Viruses tend to mutate, and over time, they tend to mutate toward less lethality. This makes sense, because higher lethality kills off the host and reduces overall viral reproduction per host.

Valerie is exactly right. Virus replication is sloppy, allowing for many mutations with each transmission. The strains that kill their hosts don’t propagate as well as the ones that just make their hosts cough and sneeze a lot. The most successful viruses are like measles and seasonal flu, that kill few people but allow their hosts to spread the infection widely.

The original strain of this coronavirus was evolved for success in bats, making bats spread virus particles without killing them. Our immune systems didn’t cope with it well, and about 0.26% of infected people died–which limits transmission of the virus strain they carried.

Other, less lethal strains are more likely to be spread widely. In fact, the most successful strains will be those that can spread without the hosts realizing they are sick. As the virus adapts to human hosts, we should see reduced lethality and enhanced transmissivity.

They are sloppy and not under the same selective pressure of living things.

Mutants that increase virulence (ability to infect diff. species, transmission rate, viability outside host, etc.) will persist, but mutations that kill hosts are self-limiting to the spread of a virus.

More studies coming out bolstering the very meds Trump was hopeful would help. How many additional people died from those medical supporters of the Leftist agenda? So blind with hate they couldn’t maintain needed focus and an open mind.

Apparently the last study cited by Fauci showing no effect failed to employ zinc and azithromycin in conjunction with the HCQ. Well…that was intentional. Because every single doctor I have seen interviewed that claimed success used the cocktail. They threw the study. Wonder how many they killed?

Fauci is a useful clown that most of us thought he was upon first impression.

You think the DOJ would investigate this whole thing to see who profited, and who were killed because of someone’s (like cuomo’s) criminal negligence?

Brittle vessels, excessive pressure, ventilators pose a progressive risk that can be mitigated through early administration of a Planned Pathogen (PP) protocol to reduce the viability of the virus and its posterity.

The insanity about hydroxychloroquine is that because President Trump had mentioned it as having been found to have potential, the propagandists have worked overtime to discredit it as a treatment, even though a number of other countries are using it and saying it helps.

What kind of insanity does it take to go against anything a person says, despite evidence to the contrary? I know there are some, like Fauci, who is invested in Remdesivir so will stand to profit from pushing that drug, but even with this, we are talking different levels of the illness. No medication works 100%, yet some of these totalitarian governors seem to think if it doesn’t work 100% then it’s no good. Unless it’s a medication President Trump hasn’t endorsed as being something that might help reduce the risks.

I think the social distancing BS over these riots are an afterthought, now that they have done massive damage. Heck, even Dementia Joe ignored wearing the mask and distancing when he went out to protest with his Antifa brothers. Though on his behalf, he might have forgotten that the plague is even going on after playing in his basement for months.

In my job I visit a lot of schools, which, while they are empty of students have a lot of workers in them, doing renovations, cleaning, fixing things they rarely get a chance to do during the short summer break. In every single case no one, other than visitors to the facility are wearing masks. Not any of the workers, not any of the staff, and even most of the visitors, such as student’s parents don’t wear masks. The majority of buildings I go to have very few who wear masks. The only places I see them in abundance is medical facilities, such as hospitals and nursing homes.

At least the Antifa terrorists ARE wearing masks, how convenient that they always hide behind masks so they are more difficult to identify, who knew they were so “responsible” that social distancing and so forth was so high on their agenda while burning down buildings and ruining businesses.

From the article: “Protest gatherings spark concerns about spreading COVID-19”

Easter was the right call. Wish DJT had run with that.