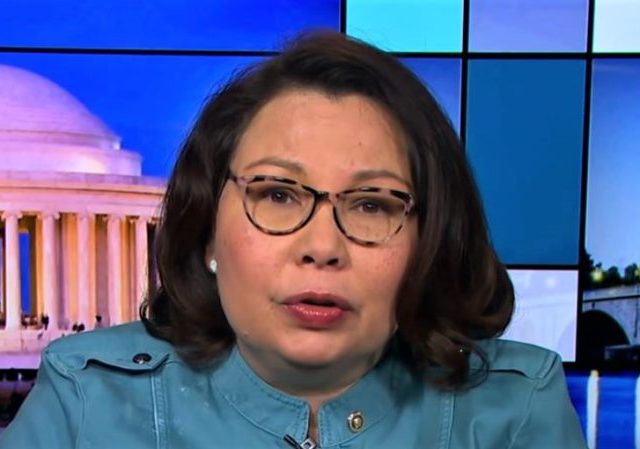 The desire to “get” President Trump is so overwhelming that Democrats and their media cohorts are almost daily caught in some type of fabrication, truth-stretching, or outright lie.

In the case of Illinois Sen. Tammy Duckworth (D), she was so caught up trying to bash Trump that she contradicted fellow Democrat and New York governor Andrew Cuomo.

As he watches Americans die by the thousands, Trump remains incapable of showing empathy or leadership. He *could* have saved lives by sending more ventilators, but he didn’t. That’s true regardless of who Donald “I don’t take responsibility at all” Trump tries to blame. https://t.co/W9KGDXZk4d

The problem? Cuomo himself has stated that no lives were lost due to a lack of ventilators.

Governor Andrew Cuomo, a Democrat, said no one — NO ONE — died because they didn’t have a ventilator.

It’s a pretty sick thing to lie like this!

She’s angling to replace Whoopi Goldberg on The View. Just another Gossiping Gertie.

What a malignant slob.

Look where she’s from, the place where their Governors make their license plates. Another product of a city corrupting the votes of a whole state.

So can we her, maxine waters and shiela jackson lee on the show Jeopardy for the laughs?

I will address your comment from the viewpoint of a FORMER member of Mensa. I was not just a Mensan, but active as a testing coördinator, proctor, and author of a montly column for the Oregon chapter.

Here goes: Mensans score at, or above, the 98th percentile in intelligence tests. What soon became apparent about Mensa: being intelligent does not make on smart.

ONE smart. Intellifence also does not make for a good touch typist.

Is “Intellifence” a real or imagined barrier?

That said, the goal is to control the disease’s progress, treat people before they need a high mortality “ventilator”, and to mitigate collateral a damage.

All of the Democrats have now resorted to simple lies because any discussion close to the truth reveals too much about the competence of Trump. So they have thrown all honor down the garbage disposal.

you can’t through something you don’t have

What’s with these people New York sends to Congress?

Can someone please explain this phenomenon?
.

New York?! What has that got to do with this?

They are the ones who didn’t move to California.

They didn’t even use all they had. S lives would have been saved by having MORE unused ventilators sitting around? They were going to offer moral support?

The concept of saving lives by the early recognizing something that has never happened before being criticized by a group that advocates the killing of unborn babies somehow rings hollow.

This obese Democrat also wrote a piece for the Washington Post where she claimed she was issued an AR-15 in the military and American civilian peasants shouldn’t be allowed to own these “weapons of war”. She lies all the time.

Duckworth has fallen into the same category as so many politicians. They did something notable in their youth (military, civil rights, etc.) and now seek to inoculate themselves from criticism based on their past when in fact all they are is a plain vanilla politician seeking to score political points. She joins a long list.

She is an embarrassment to Illinois.

and being an embarrassment to Illinois is quite the accomplishment considering how high so many have set the bar.

Who woke up Tammy Dumbworth? She is usually in a coma while Dick “turban” Durban is on the Chicago news stations on a nightly basis. Dumbworth lucked into a Congressional seat through redistricting. She won the Senate seat after the Chicago news media painted then Senator Mark Kirk as being mentally incompetent. Hopefully she gets beat in 2022.

I realize to be a liberal you need the IQ of a house plant but vents would not have saved anyone. If funding for small business were handled suicides would be lower you bloviating moron.

Has any Democrat media called her on it?
ABC? CBS? PBS? WAPO? NYT?
How about the Democrat smear machines: MSNBC? CNN? NBC?