“Several big companies have dropped their advertising for ‘Tucker Carlson Tonight’ after the Fox News host made controversial comments about the Black Lives Matter movement.” 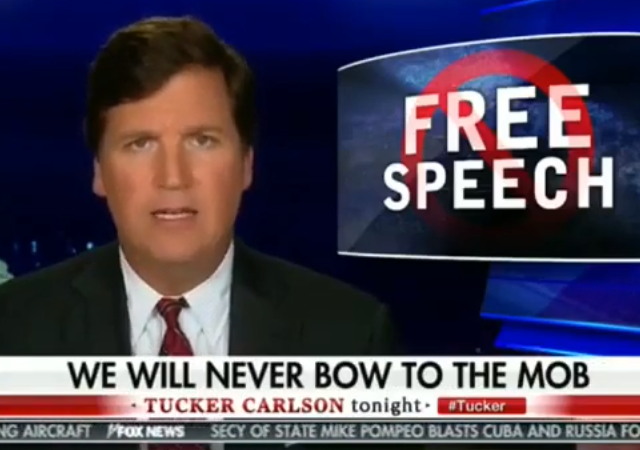 In recent weeks, Tucker Carlson of FOX News has been a lone voice in the media wilderness. No one on television has been more brutally honest about what is happening in America right now. Carlson has even had the guts to criticize Black Lives Matter.

For this, he must be punished.

As has happened numerous times before, the left is going after his advertisers.

Marty Johnson reports at The Hill:

Several big companies have dropped their advertising for “Tucker Carlson Tonight” after the Fox News host made controversial comments about the Black Lives Matter movement.

“This may be a lot of things, this moment we are living through, but it is definitely not about black lives, and remember that when they come for you,” Carlson said on Monday. “And at this rate, they will.”

The liberal activist group Sleeping Giants tweeted the following day that Carlson’s remarks were “extremely racist” and asked T-Mobile — known to run advertising during Carlson’s hourlong program — to reconsider its financial support for the show.

The telecommunications giant tweeted back saying, “We haven’t run ads on Tucker Carlson Tonight since early May and have cancelled all future placements. We will continue to support those who stand against racial injustice.”

Some media outlets actually seem happy about this. Check out the playful joy in this headline from CBS News:

Companies including T-Mobile and Papa John’s Pizza are distancing themselves from Tucker Carlson’s television show on Fox News after the conservative host’s dismissive comments about the Black Lives Matters movement.

The backlash intensified after Carlson on Monday offered an inflammatory take on the nationwide anti-racism demonstrations that have followed the death of George Floyd at the hands of former Minneapolis police officer Derek Chauvin.

Asked by a Twitter user the next day if Carlson’s message was one T-Mobile supported, CEO Mike Sievert tweeted back, “It definitely is not. Bye-bye Tucker Carlson! #BlackLivesMatter.”

In fact, the telecom said in a subsequent tweet that it had cut ties with Carlson in early May, noting that it had “cancelled all future placements” and that T-Mobile will “continue to support those who stand against racial injustice.”

Hey there, Tim. We hear you. We haven’t run ads on Tucker Carlson Tonight since early May and have cancelled all future placements. We will continue to support those who stand against racial injustice. ^AdamBailey

It definitely is not. Bye-bye Tucker Carlson! #BlackLivesMatter

Other Twitter users are showing support with the hashtag #IStandWithTucker

Tucker Carlson is an American patriot and truth-teller. He's unafraid, unbowed and unrelenting in his cultural and political commentary. Of course he's a threat to the political posers and preeners! #IStandWithTuckerCarlson

#IStandWithTucker Retweet if you do too.

The Left tries to destroy every truth speaker. I wish more men would grow a pair. @TuckerCarlson #IStandWithTucker https://t.co/NkZ6muk6eS

#IStandWithTucker because he tells it like it is. They keep attempting to have his show cancelled or have sponsors abandon him because he kicks their asses in the ratings every night and they have no other way to defeat him.

How long until they cancel Walt Disney?#IStandWithTucker

We simply can’t allow the Twitter mob and the #CancelCulture to dictate to us what we can watch. There are lots of people on @CNN I don’t like or agree with but guess what? I can change the channel and so can those who don’t like Tucker! RT. #IStandWithTucker

Perhaps no one sums it up better than Tucker’s FOX News colleague Greg Gutfeld:

leftist anti-speech wont stop with tucker. this is about intolerance of competing ideas. and silencing them via career assassination. until we all share the risk, it will swallow everyone.

Then we can make our own decisions and support the companies that we think are doing the right thing.

(I know, I can find out by myself and will do it. Just hoping to save the effort if somebody else already did it.)

These left recently:
Poshmark
Jackson Hewitt
Disney
T-Mobile
Vari
Papa John’s Pizza
Smile Direct Club
Would someone list his current advertisers.
Other than the “MY Pillow”

Watch the show with pen and paper, paying particular attention to the commercials. You’ll have your list in an hour.

I’d boycott them all…. come to think of it, I already have been. I haven’t ever patronized any of them.

1) Grab pen and paper, and sit down to watch Tucker — live or recorded makes no difference. Except watch the commercials, instead of skipping through them, as we often do. Write down the advertisers in the commercials. There’s your pro-Tucker list.

Don’t google — they’re evil, and one of the leaders in the movement to deplatform people like Tucker.

Controversial comments = opinions we disagree with.

If he gets down on one knee will they come back?

If the My Pillow Guy bails, then you know the show is done.

This isn’t new. A lot of conservative talkers on both television and radio are being targeted. I’m willing to bet that the same people “Sleeping Giants” are the tip of the iceberg. If you download or subscribe to their shows it helps keep the numbers up. I’m not even sure Disney ever even had ads on Tucker’s show.

When calling things what they are is a crime, sanity is treason.

“The further a society drifts from the truth, the more it will hate those that speak it.”
George Orwell

Hope these businesses realize that just by not advertising on Tucker Carlson’s show isn’t going to protect them from the wrath of the BLM movement, right? At some point they’ll say the wrong thing in a press statement. At some point they’ll air a racially “incorrect” advertisement. At some point it’ll be pointed out that they haven’t hired enough of the correct racially approved minorities in upper level management. In other words, this only delays the inevitable attack by BLM and the race baiters and race hustlers. It won’t prevent it. Guaranteed.

Exactly. It’s like paying a blackmailer. It never stops.

Once the Mob knows they can intimidate the company, their demands will never cease. The company can expect a series of extortionate demands, followed by pusillanimous capitulation.

I’m reminded of Jacob Frey’s groveling before the Mob in Minneapolis, and George Bridges begging to go pee before the Mob at Evergreen State. No apology is ever enough, and any capitulation only whets the Mob’s appetite for fresh meat.

“When once you have paid him the Danegeld, you can never get rid of the Dane.”

Let them drop their ads – he’ll pick up new ads.
If Fox drops Tucker, we must boycott Fox absolutely.

Bye Bye T-Mobile – Hello PureTalk. I was too lazy to pull the trigger to save Yuge $$ – you made the decision for me to both oppose the cancel culture and put more bucks in my wallet to contribute to American-centric causes.

Thanks Leftist T-Mobile, can’t wait for your Democrat Overlords to turn on your obscene corporate profits. (You idiots do know that the CEO has a compensation package of over $65,000,000 a year, right?)